I love scoop law signs (do a search on the blog for “scoop law,” and you’ll see the collection so far) because they apparently present an enormous challenge to graphic designers. The two I found on a recent walk in Tacoma, WA, a city with character and charm some 40 minutes south of Seattle, are gems.

The first gets points for an unusually realistic pile of of poop (compare and contrast the poop in Vancouver, B.C.’s signs), but forfeits most of them by showing it being gathered by an owner carrying what extensive research has revealed to be a baiting spoon: 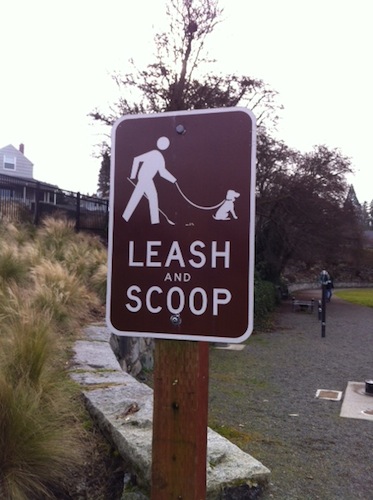 The owner’s lack of hands (and feet) is strangely unnerving; I do like, however, how the dog is completely ignoring the activity behind her.

The second (and I can’t tell which of these signs is the current model) sidesteps the poop issue by turning the clock back — perhaps too far back, because this dog (the same dog as in the other sign, which must have saved design dollars) looks like she has no urge whatever to poop. Her owner, equipped this time with what I have to believe is a hoe, seems on the point of giving her pup a frustrated poke in the butt.

On the bright side, this owner’s jazzy stance and wacky Matisse-like silhouette makes her lack of appendages groovy rather than grim.

And so the collection grows. If you run across a scoop law sign I haven’t posted yet, please send it to me! They fill me with joy.