A while back I wrote a post about the phrases you might want to master ahead of time so you can chat with French dog owners. One of the things we like most about traveling with Chloe is the way it creates opportunities for friendly encounters with people we wouldn’t ordinarily have a reason to meet, and I wanted to be prepared for our upcoming trip to Paris. Time passed by, and a Dog Jaunt reader wrote in that she and her husband, visiting Paris and the châteaux of the Loire, had been disappointed in that regard — so Walter and I arrived in Paris with altered expectations.

I agree that walking Chloe around Paris is not quite the same as walking her around Seattle or New York — I’m no ethnologist, but it’s clear that while an American’s default expression is a smile, a French person’s default expression is neutral (which to us is alarmingly dour). We’d noticed that on previous trips, but Christie’s message was a timely reminder of that important cultural difference.

In Paris, I do not typically catch an approaching dog owner’s eye and smile, as I do at home, but more often than not our dogs have met and sniffed and invited each other to play (or not) — no cross-cultural issues for them! — and the other dog’s owner has then cooed over Chloe. Less often, they’ve followed up with a few words to us, but the ones that have have been as friendly as their U.S. counterparts. On several occasions, a dog’s owner has hustled his or her pup past Chloe, but my impression was that the owner was either in a hurry or wasn’t confident that their dog would be friendly — and that happens at home, too. 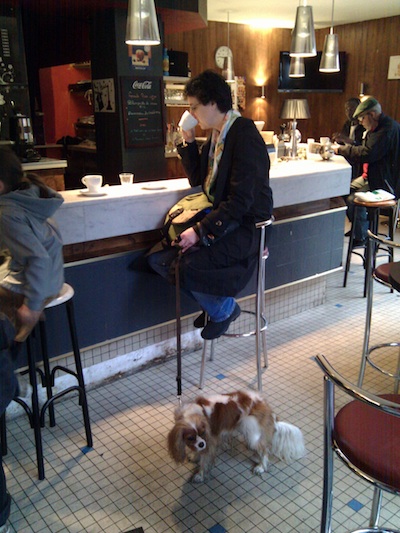 Coffee with Chloe in Paris

So far, in short, having Chloe along has had its usual effect on our travels. One powerful example of The Chloe Effect occurred on our first morning, when we presented ourselves at a bar for an urgently-needed coffee. The bartender gave us what we ordered, and moved the sugar bowl to our part of the counter, all without any change of expression. From his point of view, none was needed — we asked for coffee, and he provided it. When he came around the counter to do something elsewhere in the bar, however, he bent over Chloe and spent a solid minute patting her and twirling his finger temptingly around her nose (which she thought was swell, so she licked him). He was, in reality, a total marshmallow of a bartender, but we would never have known that if Chloe hadn’t been at our feet — we knew he wasn’t actually mean, or even grumpy, but it warmed up the morning to see him messing with Chloe.

Since then, we’ve had happy encounters with several terriers and Bichon/Poodle fluffballs, as well as a couple of unleashed spaniels. A senior gentleman with a 5 year-old Cavalier agreed today that Cavaliers are the finest dogs ever made. A MinPin urged Chloe to play — unsuccessfully, since Chloe has no room in her head for anything but pigeons. A senior, handicapped lady on the bus saw Chloe in her carrier, observed that Cavaliers are super-sweet, and tried to get me to take her seat. A pair of ladies walking by came completely unglued over her — I now know that “trop mignonne” is French for “too cute.” One of our waiters followed us out of the restaurant to say good-bye to Chloe and gave her a wine cork to play with — he was a goofball to start with, but we wouldn’t have known quite how much of a goofball if Chloe hadn’t been with us.

As I said, Christie’s comment was a good reminder of important cultural differences between Americans and the French, and saved us from the disappointment we’ve experienced on past trips (before we adjusted, and toned down our own smiles), but I’m happy to report that, with Chloe, we’re meeting a variety of Parisians in a way we wouldn’t have on our own.