About a month ago, Chloe and I traveled from Seattle to Portland (and back) via Amtrak. I look at that sentence and I marvel: For the past seven years, I’ve been wistfully comparing Amtrak’s draconian pet policy to European trains’ typically generous policies, and praising the rare U.S. train systems (hello, Metro-North!) that are pet-friendly. Back in 2014, Amtrak cracked open the door with a pilot program allowing pet cats and dogs in carriers on certain Chicago-area trains, and they later gently expanded the program. 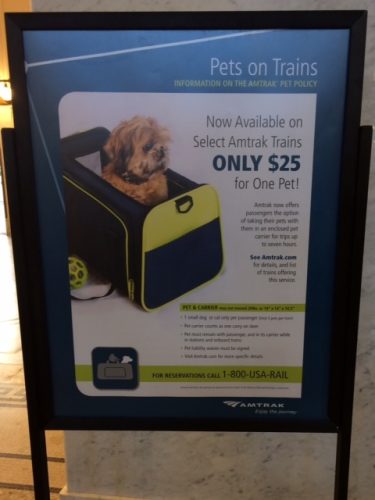 Now there are signs for pet travel in Amtrak stations! Hallelujah!

At the moment, “cats and dogs 20 pounds or less” are allowed on board many train routes covering all regions of the country, and helpfully listed on Amtrak’s pet policy page. As you’ll see, there is a $25 pet fee per trip “segment,” and you need to reserve a spot for your pet in advance — plan ahead, because there are only five pets allowed on a train (only one pet per passenger, is the current rule). Read Amtrak’s pet policy page carefully, since there are many details to absorb, and some important route-specific rules. The features that most affected my plans were the requirement that travelers with pets travel only in Coach seats, and that pets are only allowed on trips scheduled to last seven hours or less.

My romantic plans to cross the country in a sleeper car with Chloe will have to wait, obviously, but in the meantime, I’m happy to make shorter trips. Going to Portland, for example, was easy and delightful — words I never use to describe driving to Portland from Seattle, because, as I’ve mentioned in the past, that particular road trip is like Gilligan’s 3-hour tour. It seems endless, and strangely spooky, and also (forgive me, but I just punched one of my own buttons) there are stretches of I-5 where the lane markings just completely disappear in the rain (it rains quite a lot in the PNW) and all you can do is prepare yourself mentally for fiery death. On the train, by contrast, you reach another tasty snack out of your carry-on, snuggle deeper into your throw, and check Google Maps for the name of that cute little island out there.

Here’s how it works. I called Amtrak to make my own reservation and I told the reservation agent I’d be traveling with my small dog. It is my experience that there is not a penalty for making train reservations over the phone, rather than online (compare and contrast making plane reservations). I received via email an “eTicket” listing both me and “Dog, Chloe” as passengers: 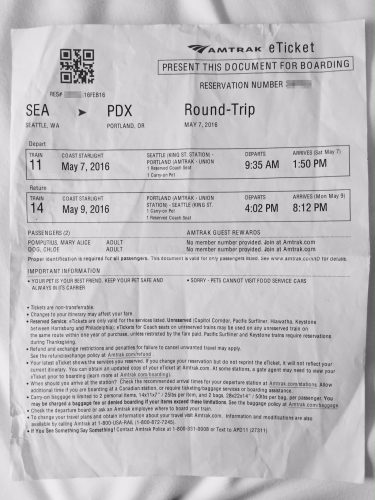 Chloe and I are both listed as “Adult,” and indeed, I’ve just realized that she and I are about the same age right now. My puppy has grown up!

When I arrived at Seattle’s Amtrak station, I lined up to see a ticketing agent, not only because I had a suitcase to check but also because I needed to collect and complete a pet waiver form and give the agent the opportunity to eyeball Chloe in her carrier. We used Chloe’s usual large SturdiBag, and that worked fine. 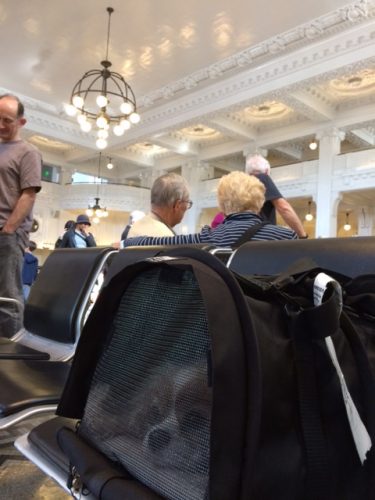 Chloe waiting for the train in Seattle’s newly-restored Amtrak station. Her carrier should be on my lap or on the floor — and it was, except for this picture.

Here’s where I first realized how new this policy still is. I had to tell the ticketing agent that I needed a waiver, and she had to consult her colleague to locate the stack of forms. Speak up if your agent misses that step, and make sure you walk away with a form filled out by him or her (the “PNR” box in the lower right corner is the agent’s responsibility) and signed and dated by you. You’ll need one for each trip segment; I got one, therefore, in Seattle and another, a couple of days later, in Portland. 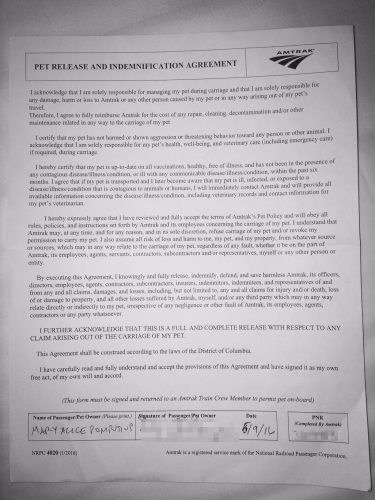 Please note that while Amtrak does not require that you show up with proof of vaccinations, in this waiver you are attesting that your pet is, among other things, “up-to-date on all vaccinations.”

The reason I have a pet waiver to show you is because the system is still really new. The conductor in Seattle collected my pet waiver in the station, when I arrived at the head of the seat assignment line; on the return trip, in Portland, a different kind of official gave me a seat assignment, and the actual conductor (who I encountered later without recognizing him) didn’t ask for the form. This is the kind of thing that will, I trust, regularize over time. (In the meantime, it made me chuckle when one of the onboard staff stopped next to me, looked at the tab tucked into the rail over my seat, and asked “what does P-E-T mean?”) 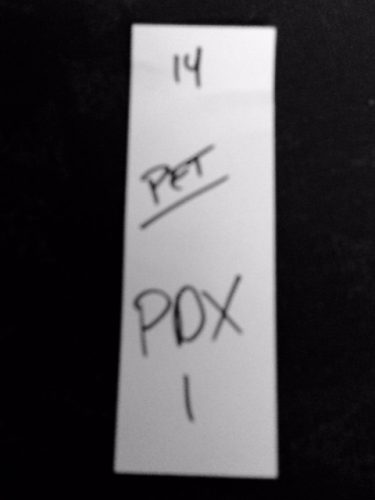 So blurry! But I thought the “Pet” note would make you smile too.

Anyway, since I was traveling on the Coast Starlight, a long-haul train, the Coach seats were very comfortable. There was no room at all under the seat in front of me, and I don’t recall whether there was a space that I could access under my own seat. I put Chloe’s carrier on the ground in front of me, with my purse, which was comfortable for us and apparently acceptable to Amtrak.

As I was writing this post, reader Cassidy wrote to me about her recent experience traveling via Amtrak with Azuki, her 23-lb. Shiba Inu. Cassidy, thank goodness, fills in the missing info: “Their website also says she had to stay under my seat the whole trip, but there was a huge metal bar in the middle of all of the seats such that not even my backpack would fit under. So I put her in my lap (which she prefers) and the conductor didn’t mind at all, nor did the person sitting next to me.” 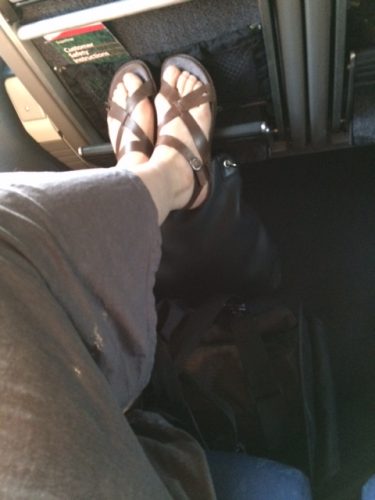 My legs, propped up on the nifty bar Amtrak provides for propping purposes, with Chloe’s carrier closest to me and my purse under my ankles. 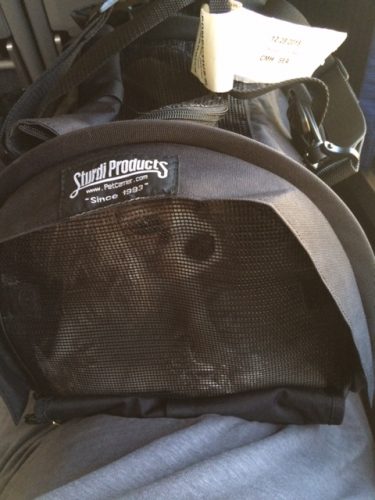 Halfway through the trip I moved Chloe’s carrier to my lap in a desperate search for warmth. It was blazingly hot in Portland, so I’d worn a summer dress, but the train was COLD. Thank goodness for Chloe, radiating heat even through the bottom of her carrier. 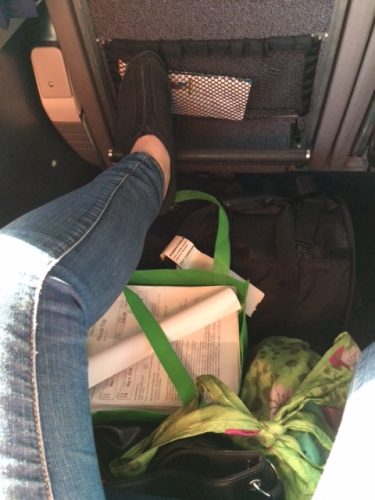 Chloe under my legs on our return trip, now sharing the space with my purse and two sacks of books from Portland’s phenomenal bookstore Powell’s (alas, not pet-friendly).

Learn from my errors and pack a light throw (I did bring a travel pillow, and that was a good call); also, since your pup is not allowed in the food service cars, pack a picnic for yourself. Please note that while one of the enjoyable features of riding a train is having a beer, that’s a pleasure you’ll have to forego when you travel with your dog: Since you have the dog, you can’t get to the Lounge car to consume beer there (and you’re not allowed to bring beer purchased there back to your seat); and because you’re in Coach (rather than a private Sleeping Car), you cannot drink beer that you’ve brought with you. Them’s the rules, alas.

Our trip was three hours long, and Chloe slept the whole way there and back. On a longer trip, she might have liked a leg stretch and a bathroom break, but neither is guaranteed, so plan ahead. I was advised to speak with the conductor after boarding and ask if s/he planned a longer stop at one of the stations (periodic longer station breaks are not required, but if the schedule permits, they may happen — especially, I think, for the benefit of smokers, but now travelers with pets can benefit too).

Last but not least, I’m happy to report that the folks at Amtrak reacted to Chloe’s presence with good cheer — most didn’t bat an eyelash, and some reacted with positive enthusiasm. Cassidy, traveling from New York City to Washington, D.C., had the same experience. In fact, she reports, “The conductor actually came by and sat next to me when my seatmate got off the train and petted my dog, telling me that she has dogs of her own and she was so happy they decided to let them on.”