Reader Reinell wrote to me back in November 2010 about her upcoming trip from Canada to Sweden with Rocky and River, her two Yorkshire Terriers. Her plans were a bit complicated (a domestic flight to Toronto, an international flight to Copenhagen — both on Air Canada — and a train trip to Sweden), and she wondered, too, about sedating her dogs en route. She kindly agreed to send a report when all the dust settled, and here it is:

The security went fine. We took them through and they scanned their bags and people in security liked them a lot. Kind of an ice breaker (much nicer experience than what usually happens through security) with the dogs there. The first plane trip to Toronto was about 3 hours. The second to Copenhagen was about 8 hours. We didn’t have any problems with Rocky the whole trip — not a peep and he didn’t even want to leave his bag and go potty in the family bathroom. Neither of them went to the bathroom the whole trip (this was amazing!). River cried a little on the flights but not very loud and not very long.

Danish Customs scanned them for microchips and didn’t look at any papers. There were no Customs people on the train to Sweden so when we got to Sweden my husband dialled a number and they asked for the certificate numbers on their papers and that was it.

At this point, I piped up and asked Reinell what telephone number her husband had called in Sweden, and how they had known to do that. She told me that she had started with the page on the Swedish Customs site dealing with “Pet dogs and cats“.

I wrote them an e-mail before coming over letting them know the flight numbers and time of our arrival. I don’t think that is necessary, but in their response they gave me the number 040-66 13 220 which goes to the Malmö branch’s switchboard of the Swedish Customs, which I should call if there were no Customs staff on the train [from Denmark to Sweden]. As there were no Customs people on the train, we called the number and got the instructions of what we were to do (provide certificate information over the phone) and that was it! Very helpful. I think being overly-cautious helped us in this case as we were prepared for another situation than what may be the norm, that actually happened.

I think that this information would be helpful for people travelling to Sweden via another European country by train (possibly by car). There are Customs staff stationed at the Gothenburg (Göteborg) airport and Stockholm airport so in those cases the Customs clearance would take place automatically. I travelled to Copenhagen, Denmark (Kastrup airport) and took the train over the bridge between Denmark and Sweden to get to southern Sweden. I went through Danish Customs at the airport, but that was just a first step for clearing the Swedish Customs. The import rules to Sweden are very strict and must be repeated every time you enter Sweden with your pet. 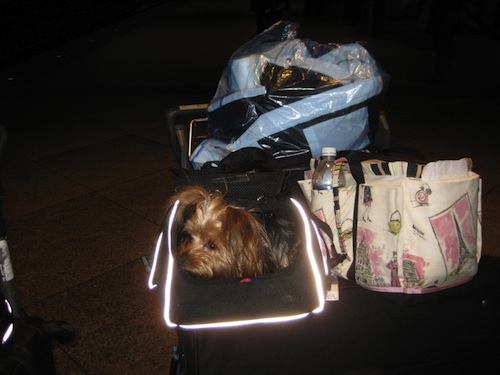 Rocky at the airport in Denmark, waiting for the train to Malmö (and looking pretty impressed by his bag's reflective trim)

As I mentioned, Reinell felt her two Yorkies would need a mild sedative. I told her that I didn’t have any experience with sedatives, but I did know to be cautious and consult a veterinarian. Here’s what they ended up doing:

We started our travel with each dog taking half of an Acevet tablet. We have two dogs — our first dog is Rocky who is a Yorkshire Terrier, male and weighs 4.3 kg and he only needed half a pill for the whole trip. Our second dog River who is a Yorkshire Terrier, female and weighs 3.4 kg and she needed another half a pill (one total) when we arrived in Toronto.

[I pass on this info with some hesitation, because I don’t want anyone to start prescribing for their dogs. Even if you have a Yorkie that weighs just what River or Rocky weighs, be sure to consult a veterinarian before giving your dog a sedative! Every dog is different, and will react to tranquilizers differently. And weight doesn’t tell you the whole story — notice that in this case, the smaller dog required a half pill more than the larger dog.]

I always wonder what carrier people choose, and Reinell, bless her heart, included that information. She bought the PetEgo Jet Set Carrier, in black, in two different sizes — small for River, and medium for Rocky. Here’s a picture of Reinell on the train to Sweden, covered in carriers: 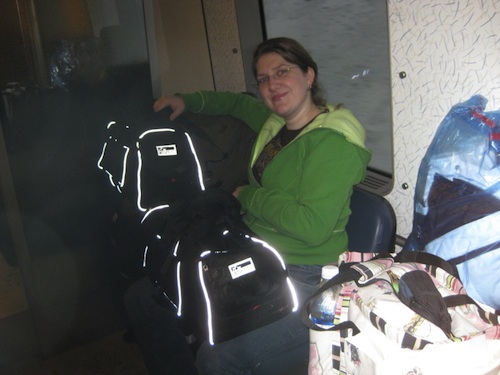 Reinell’s verdict? “It went so well I am thinking we may take them with us when we travel to Canada again, which is a nice feeling. We need our pets with us, they are family and we couldn’t be without them.”