Kyle Hansen of the Kyjen Company sent me three different Outward Hound carriers to try out and review. Kyjen has not paid for these reviews, and when I warned Kyle that they might not be love-fests, he said, essentially, “let ‘er rip.”

Here’s the third review, of Outward Hound’s Roll Along Pet Carrier & Backpack. It has a retail value of $79.49 and will be given away to one lucky reader in a giveaway starting tomorrow, January 27th! 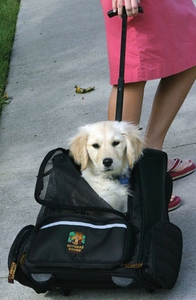 Photo by The Kyjen Company

The Roll Along Pet Carrier both rolls and converts to a backpack. At 19Hx14Wx10D, it’s larger than the last Outward Hound carrier I reviewed, but it shares many of the same features, including enormous ventilation panels on the front and sides, and roomy pockets — big enough to carry your dog’s leash, poop bags and treats and still leave plenty of room for a wallet and keys.

This carrier handles its various tasks pretty well. Our 13-lb. dog Chloe is at the upper limit of what it will handle, and with her on board the carrier rolls well but shows a tendency to wobble. Carrying her on my shoulders, I wished for straps that were better-padded, but noted with pleasure that the carrier is quite light and its hard bits rest on the back of my hips, which have sufficient padding of their own. (The backpack carrier that I own, Creature Leisure’s Carry Den XT, is a better-quality bag, overall, but throws a structural support uncomfortably across your backbone.) I could see carrying Chloe in this bag for a while — not all day, but certainly for a couple of hours — and it would work well for people bringing their dogs with them on a scooter.

“Great for airline travel,” says the marketing materials — and indeed, a dog park friend of mine who travels the world with her Schipperke is on her second Roll Along Pet Carrier (the first carrier’s wheels “melted” during a particularly rigorous trip to South America). It needs to be pointed out, however, that this bag exceeds every major U.S. airline’s maximum dimensions for an in-cabin pet carrier (it does much better with international airline maximums). As you know from previous posts and comments, most carriers you see are non-complying. Unlike some non-complying carriers, though, this bag looks big, probably because of its large side pockets.

It won’t fit left-to-right under an airplane seat — the handle will get in the way, and the 10″ depth (which will be the height, once the carrier is laid on its back) is structured enough not to flex. It would, however, fit front-to-back, with the narrower part by the handle inserted first under the seat. A few inches of the widest, bottom part would be visible to an alert flight attendant.

From your dog’s point of view, it works as an in-cabin carrier. Even Chloe, a big small dog, had lots of room, and the padding on top of the handle structure is light but sufficient. Negatives? This carrier has no privacy panels, which may be an issue if your pet prefers cave-like solitude when she’s traveling. Some users complain that the front ventilation panel droops onto their pet when the bag is on its back. It does, a bit, but Chloe seemed completely unfazed.

I’d buy this bag in a heartbeat for international travel, and I’d probably risk it, with fingers crossed, for domestic travel too. Frankly, I wish I’d bought it instead of my Creature Leisure Carry Den XT (purchased for outings to farmer’s markets).