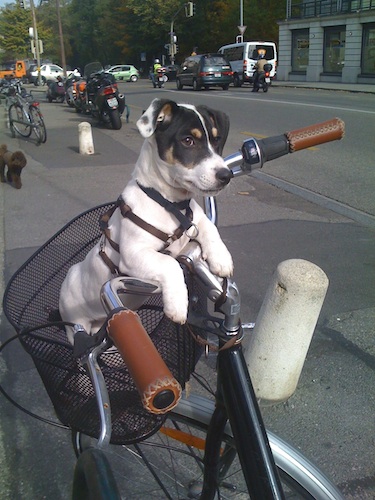 Remember reader Meg, whose Jack Russell Terrier puppy named Cooper was featured in a Photo Friday not too long ago? (Here he is again, because I can’t get enough of this picture.) She wrote to me initially because she was planning a trip with him, on Portugal’s TAP airline, from Geneva to Lisbon. She was kind enough to send a follow-up report, and here it is:

Regarding the flights, both went very smoothly. Cooper was above the weight limit [TAP’s maximum weight for an in-cabin dog plus carrier is 7 kg, or 15 lbs.] and on the first flight the check-in guy asked us to weigh him — I almost had a panic attack. But I think that because Cooper is small and the carrier bag was within the required size he didn’t say anything, he just charged us for the maximum weight.

On the flight back it was even better — it helps when the people at the check-in like dogs. There were two free check-in counters and I chose the one where the guy was just beaming looking at Cooper. His first question was: “That’s the dog from ‘The Mask,’ right?” He didn’t even weigh him — he just asked us for Cooper’s weight and I said in a faint voice “7 kg” and he replied “You said 5 kg, right?” So I even paid less…

On the flight to Lisbon there were at least three dogs on board and one cat. Everyone at TAP was really nice, one of the air hostesses even came and petted Cooper! We were even allowed to have the bag slightly open during the flight so he could pop his head out… Too bad in Portugal dogs can’t go anywhere…as opposed to Switzerland where dogs are allowed pretty much everywhere (shops, restaurants, trains, buses…).

I know very little about European carriers, aside from the ones that are imported to the U.S. (PetEgo is the foreign brand I see the most), so I was interested to learn about the carrier Meg chose for Cooper:

I couldn’t find the carrier bag you recommended [I had recommended the large SturdiBag], so I bought this one instead: http://www.qualipet.ch/shop/nylon-tragtasche-divina-gross-rot.html. The carrier didn’t seem as comfortable as yours, but it’s very light, so it helps for the weight limit. It was the only one where Cooper could fit in and we just bought it the weekend before travelling (as Cooper is a puppy and still growing we decided to buy at the last possible moment…though I hope he won’t grow much more).

Cooper could easily turn inside the bag, and sleep lying on his side, so he was quite comfortable. We also had the pleasant surprise of finding out, after we had made our decision to buy it, that it was the cheapest one: CHF 39 (around 40 USD).

Thanks so much, Meg! I suspect it will be a while before I travel on TAP or visit Portugal, so I’m really grateful to learn about your trip, and hear about your experiences.