In one of those twists of fate, I got a message from a reader asking about traveling with two Pomeranians at once, in a divided bag — and at nearly the same time, reader Debra posted several messages on Dog Jaunt’s Facebook page about her recent trip to the Fort Myers/Naples part of Florida with her dogs Raisin and Mia, in a divided large SturdiBag. How lucky is that? I knew there were issues with traveling with multiple pets in the same in-cabin carrier — take a look at the “pets per passenger” column of this Dog Jaunt guide to U.S. airline policies and you’ll see what I mean — but on the rare occasions when we’ve traveled with two pets, we’ve put them in two carriers.

Here’s what I’ve learned from Debra. First, her pups both weigh about 8.5 lbs., and they’re about 2 years old. They’re a “fairly new hybrid called Mexican Frenchies…French Bulldog x Chihuahua. Very sturdy and not afraid or excitable. I take them to nursing homes and hospitals.” 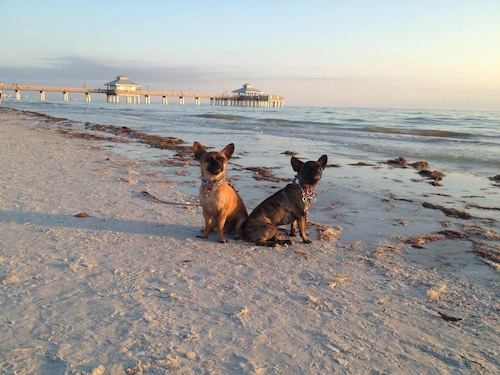 Mia and Raisin on the beach in Florida

After reading Dog Jaunt posts praising the large SturdiBag, Debra bought one, but she chose a divided bag, so the pups would travel together, but still have space to themselves (they’re sisters, she explained recently, and sometimes they pull each other’s hair). She planned to travel either on U.S. Air or United, she told me, and what did I think? I expressed concern, and urged her to ask several people at each airline, and take extensive notes from her conversations, in case she ran into a problem with the ticketing agents. Sure enough, one of her messages reported that she had “been told 3 different things. I just called U.S. Airways and was told that they had to be from same litter and under 20 lbs.”

She decided to fly on United, and prepared in advance for possible problems: “I’m going to use another carrier as a carry on just to be on the safe side.” More details: “Not knowing if the airline, would let us keep them in one, we used another bag as our carry on. It was full of ‘stuff,’ I had an empty flat fold up bag inside of it also just in case we needed to empty it and use it for one of the dogs.”

When she weighed her pups in their carrier, the scale said 21.5 lbs. Although United’s website does not provided a maximum weight (and neither does U.S. Air’s) for in-cabin carriers, Debra had apparently been told that 20 lbs. was the limit. She did her best to trim ounces by moving “pads, shoulder straps, tags, etc. into my carry-on (their extra bag, just in case)!” In fact, though, “no one weighed them.”

So what happened? “On our first flight, the ticket agent made us separate them, so we did use both bags. The rest of the flights there was no issue flying them together. Better be safe and prepared than sorry!” More details: “The first ticket agent checked the policies and asked if they were under 6 mos. I was afraid to push it so I told the truth. I don’t think he would have questioned my answers, he didn’t look in or check. We moved them back into the same bag in flight, because they kept each other calm. No problems on the way home, we were only charged for one, no questions and the airline personnel got them out to ooh and ahh over them. Live and learn. We will always use the extra bag as a carry-on, just in case.” 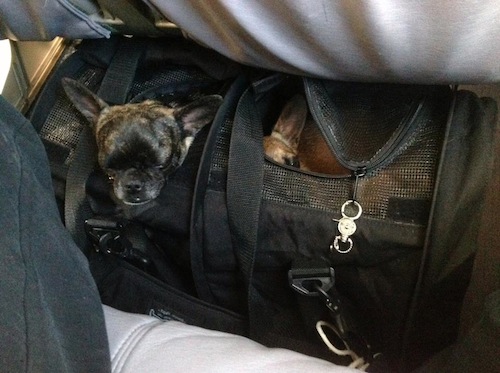 Raisin and Mia together in their large SturdiBag divided carrier, on a United Embraer 175

How did the size work for her two pups? The large SturdiBag was marginal, says Debra: “It’s a great bag, but limited (obviously) in size. I would have preferred the extra large, but because of size limitations I was a little skeptical of trying to get by with it.” In a later message, she told me the bag was “at the limit of size that I would put them in. Raisin actually slept like that picture on the flight, Mia finally would get comfortable with the zipper open. I discreetly hid them with the little table and my shawl.”

And was all the effort worth it? The pups’ first flight was, after all, their first flight: “Flying was an experience and one which we are glad to have under our belt, but the airport personnel were so happy to have us around, all loved seeing the girls and had fun questions and comments. [The pups] were better on the way home and I suspect each flight will be easier for them.” The vacation itself sounds like a total delight, and Debra could not have been more positive about it: “Our doggie vacation was a huge success…Ft. Myers, Naples, etc. are welcoming to dog guests. We can’t say enough about the locals, beach and restaurants being dog friendly. Really amazing, actually.” And check out her pictures: 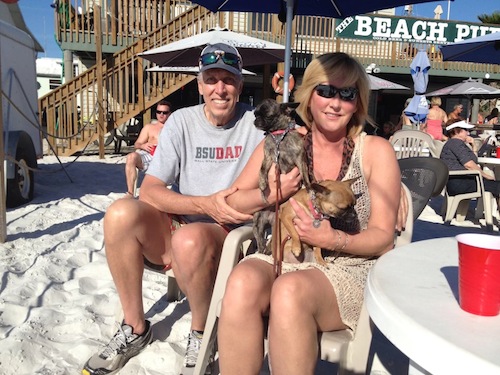 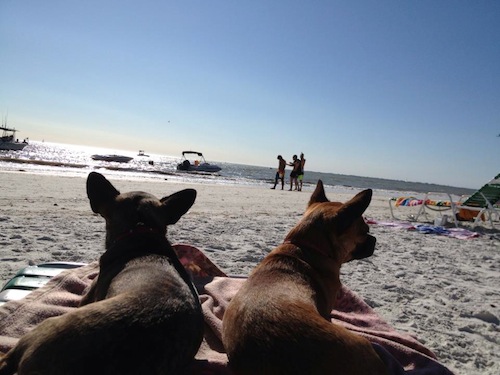 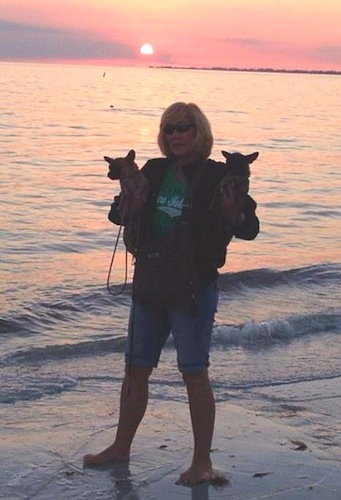 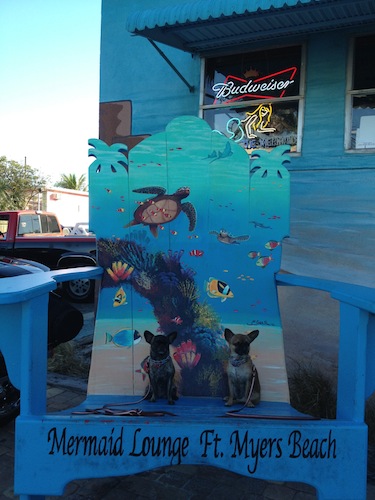 One of her post titles says it all (“So sad to leave!”), but in a later message she told me that her kids are grown, and she and her husband are planning to travel a lot with Raisin and Mia. I’m loving her final comment (“Can’t wait for my hubby and the girls to go again!”), but I also love her care in researching and preparing for the trip, and for her excellent tip about carrying an extra dog carrier, just in case. Thank you so much, Debby, for the pictures, for the details about how you made the trip work for you and your pups, and for your wonderful enthusiasm! Please note that I’m adding the in-flight picture to Dog Jaunt’s growing collection of pictures of carriers under plane seats (see “Pictures of carriers on planes,” in the sidebar), for use by travelers while planning or while negotiating your way past airline agents.