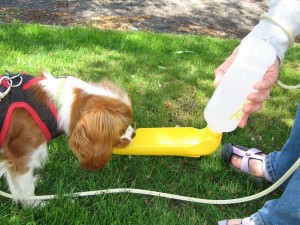 The Gulpy is a simple product that does its job really well. It’s a water bottle with a screw-on cap attached to a scoop-shaped piece of plastic. Closed, the scoop hugs the bottle and allows it to be carried in a normal water-bottle holster. Flipped open, the scoop holds water (squeezed out of the bottle) in a convenient “dish” for your dog to drink from.

The Gulpy has a clip on the side, so you can hook it over your waistband. I don’t like stuff dragging on my waistband, so I don’t use that feature. I carry my Gulpy in the water bottle holster on my OllyDog Walker. It also fits in the cup holders of my car.

Pros: Provides clean water easily, is easy to carry, and even the fussiest dogs seem to take to it right away. You squeeze out a bit of water at a time, so there’s not a lot of waste — I only end up tossing a tablespoon of water or so into a nearby patch of greenery.

Cons: Some Amazon users complain that their Gulpy has broken after they’ve dropped it on its top. I’ve never dropped my Gulpy, so I can’t comment. They’re pretty cheap, so even if I dropped one and broke it, I’d just buy a replacement.

There are some alternatives on the market right now, including the Handi-Drink dog water bottle, which comes in a number of sizes, the Water Rover bottle/bowl and Lixit’s Thirsty Dog portable water bottle/bowl. The Handi-Drink is pretty close in appearance to the Gulpy, and may stand on its end better than the Gulpy does, but it requires an extra step to use: You first have to attach the water pan to the bottle and then squeeze out the water. The Water Rover is extremely clunky. The Thirsty Dog is similar to the Gulpy, but with a shoulder strap attached to the cap, which I absolutely don’t want but you might. Some users complain, though, that when the bottle is full, it can be so heavy that the bottle pulls out of the cap.