Just over a year ago, I reviewed H2O4K9’s gorgeous new water bottle for dogs. I loved some of its features, particularly its flat bottom and the way it can be hooked onto a belt loop or bag with a carabiner. On balance, though, it didn’t convince me to change over from the Gulpy dog water bottles we’d been using. Since then, H2O4K9 has come out with a water bottle targeted at small dogs, so naturally I had to buy one. 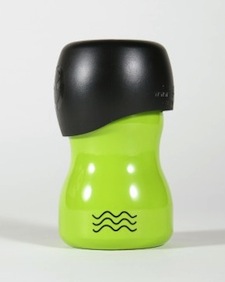 Once again, I bought it in the irresistible Tree Frog Green. It has many of the same features as the bottle I reviewed (once again, I like the flat bottom and the stainless steel body), and it has some improvements, from a small-dog perspective (in particular, the lid is smaller, and less daunting as a drinking bowl). I find its diminutive size (it holds 9.5 oz. of water) convenient for short walks, but it wouldn’t be a good choice for a day’s outing or a long hike.

An observation, neither negative or positive: The Thermos-like screw top occupies a large part of the lid, and limits the depth of the water bowl you offer your dog. Another observation, tending towards negative: Unlike the Gulpy, an H2O4K9 bottle can’t be shared with your dog, because the water she’s drinking and slobbering into bathes the lid insert. A final observation, pretty negative: Unlike the 25 oz. bottle, whose molded plastic lid includes a loop that can easily be hooked by a carabiner, the plastic loop on the 9.5 oz. bottle’s lid is hard to access. The company provides a carabiner, but it’s small and wimpy (I’ve already destroyed it, in fact, in the process of orienting it with the smaller part of the oval downwards). I own a clutch of sturdy carabiners, but a normal-sized carabiner can’t reach the blasted loop. Given that the carabiner attachment is one of the things that distinguishes H2O4K9’s products from its competitors’ water bottles, the company should have given more thought to its lid design.

I’ll keep this water bottle (I gave the last one away to a friend with a Great Dane), and I’ll use it in certain circumstances, especially if I manage to find a good-quality replacement carabiner, but the Gulpy water bottle hasn’t been toppled from its #1 position. [5/4/11 Today I found a great replacement carabiner at REI — it’s an S-Biner, in fact, so it’s super-convenient to use, and it’s made by Nite Ize. The size #3 works well. Mine is stainless steel, but the only Amazon link I can find for you is to the black version — which I should have gotten, because it would look nice against the black lid.]