I have mentioned Celltei’s custom carriers in the past (they made a gigantic combination wheeled/backpack carrier for a 50 lb. dog, for travel on NYC’s subway system), but I have yet to check them out for myself. I was grateful, therefore, to hear from reader Courtney about the custom carrier she ordered from Celltei for Franny, her 19 lb. Cardigan Welsh Corgi — especially because I’ve just learned that the expandable carrier I typically recommend to folks with really large small dogs (the large Kobi carrier) has been discontinued.

Be aware up front that these carriers are pricey. However, they’re very well made, and as you’ll see, they are tailored to your pet and your needs. Here’s the carrier that Courtney and Celltei designed for Franny (who weighed a bit more when it was requested). It’s a modified version of their Backpack-o-Pet product: At 19″ L x 12″ W x 11″ H, it’s an inch shorter than the off-the-shelf model (which is good, because a 20″ long carrier starts being worrisome), but it has a built-in gusset that, unzipped, adds six inches to the carrier’s length. That’s three inches more than the now-unavailable large Kobi carrier offered (and the Kobi carriers only have a shoulder strap; they do not offer a backpack option). 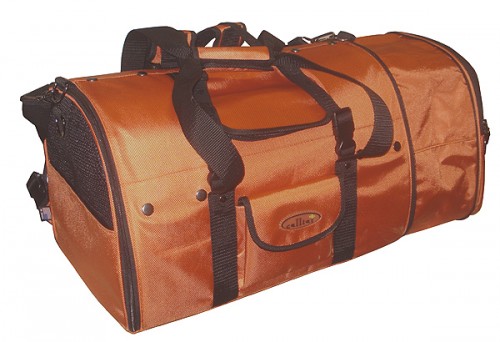 The extra six inches can only be deployed when the carrier is resting on something, since that extra length is unsupported — you would board the plane, stow your pet, and take off with the gusset zipped, and then unzip it and release the extension once the plane levels off. It gives Franny room to recline at the airport too: “I use [the 6″ expansion] at the gate and she looks very comfortable.”

Courtney reports that she and Franny travel comfortably with the bag on Southwest: “I have fit it under the middle and aisle seats with no problem, though I’ve found it slides in much easier if there’s not already someone in the seat in front of me!” 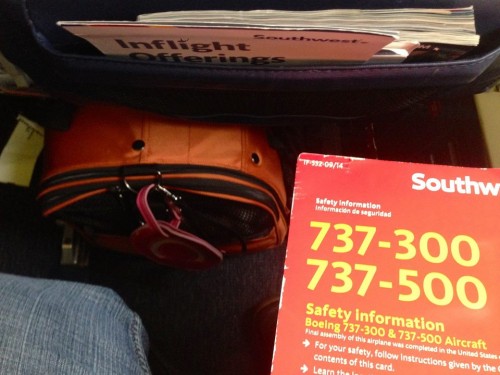 Franny’s custom Celltei on a Southwest 737-300/500 series plane. At the lower left of the picture you can see the seat support, for reference. 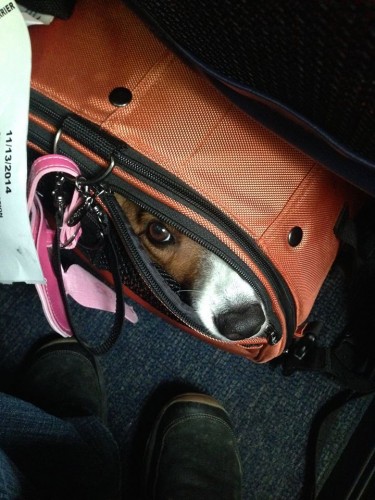 A pic of Franny, peeping out.

Emboldened by success, Courtney is taking Franny to Italy, and she reports “Celltei bag no problem in the window seat in economy comfort on a Delta 737!” From the second, long-haul leg on a Delta A-330, the report was nearly as good: “My bag doesn’t fit next to her like on the 737s but [her carrier] does go all the way under” (I wrote back and told her that my own bag hardly ever fits next to Chloe, so I call that a win). Here are her pictures: 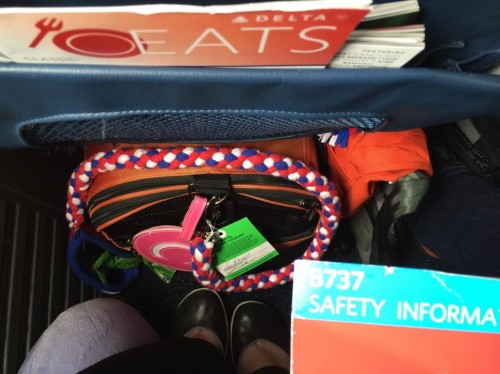 And under an Economy seat on a Delta A-330 plane.

Thanks so much, Courtney, for raising my awareness of the custom Celltei option to envy levels! I am tagging this post so it appears in Dog Jaunt’s growing list of pictures of carriers actually being used in plane cabins — and I am making myself an all-caps note to contact Celltei and design a carrier for Chloe.