Chloe and I had some experience with La Quinta and Drury hotels when we began our cross-country road trip (here’s my post about the La Quinta near O’Hare, and here’s one about the Drury Hotel near the Nashville airport), but we had a lot more when we ended, and it was all good. 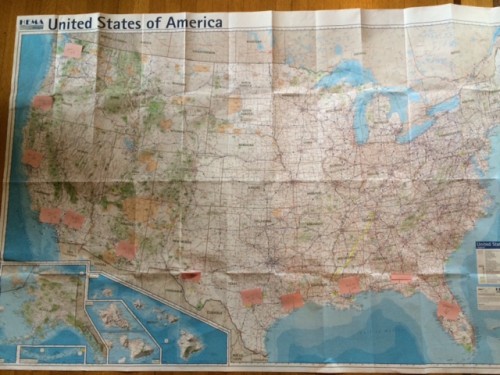 The big road trip of February/March 2015, in pink Post-It notes

As you know from previous posts, we recently drove from Tampa to Seattle along the southern and western edges of the United States. We sought out La Quinta and Drury hotels, and stayed elsewhere when we had to. The Drury chain is fancier than La Quinta, but still affordable. Its properties are, loosely speaking, in the Southeast, the Midwest and Upper Midwest, Texas, and a chunk of the Southwest. La Quinta hotels are very affordable, but every one I’ve been to has been clean and pleasant. La Quinta’s hotel network stretches across the country, but falters a bit along Highway 10 between San Antonio and Tucson (there are properties, but they weren’t located where we wanted to end our days — happily, we found a couple of great alternatives in Marfa and Van Horn, Texas). For much of our trip, the La Quinta hotels were twinned with Cracker Barrel restaurants, which make me happy.

Both chains are dog-friendly (as always, be sure to let the reservation agent know that you’ll be arriving with your pet). Drury hotels charge a $10 per night fee (here’s a link where you can find the full Drury pet policy); La Quinta does not have a pet fee (here’s its full pet policy).

We stayed in Drury hotels in New Orleans and San Antonio. To keep costs down, Chloe and I shared a room with the friend we were traveling with, and in both cities the cost of a Double Queen was well under $150 (your mileage may vary — prices change, and we were traveling at a quiet time of year). The New Orleans hotel was only a short walk from the French Quarter, and the room was downright plush. The San Antonio hotel was right on the Riverwalk, only a couple of blocks from the Alamo, and it too was attractive (in a slightly sterner, more businesslike way). 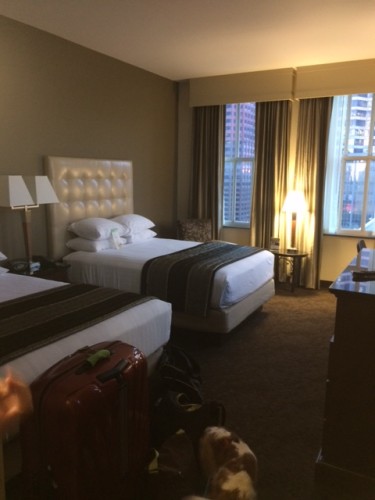 Chloe milling around in front of Big Red, her suitcase, at the entrance to our Drury hotel room in New Orleans 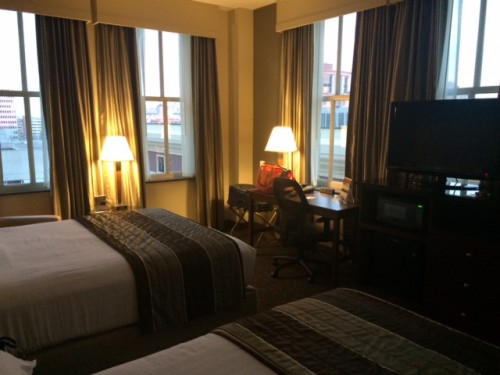 A better view of our New Orleans room 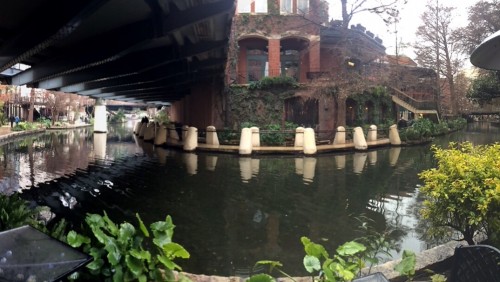 I failed to take a picture of our Drury hotel room in San Antonio, but you can walk directly out of it onto the beautiful Riverwalk, shown here in one of my beloved panoramas — pets welcome to amble alongside you, and Chloe had a blast

We stayed in La Quinta hotels in Tallahassee, FL; in Galveston, TX (Seawall West); and in Tucson, AZ (Reid Park). All I can remember about the Tallahassee property is being profoundly grateful we made it there just before a torrential downfall (and that it was just across the street from a Cracker Barrel), but the Galveston property earned itself a photograph.

Another moody day, another crazy panorama shot — but the point is that there is a whole lot of gorgeous Gulf of Mexico action RIGHT OUT THE FRONT DOORS of both of the Galveston seawall La Quinta hotels (this one was Seawall West).

Be very careful crossing Seawall Boulevard, a highway in all but name that runs in front of the hotel — but it’s worth doing, because there’s a long promenade along the seawall on the other side, and Chloe gamboled in the gusty sea breezes. On the far right of the picture you can see a structure heading out into the water; we had a fine dinner there, at Jimmy’s on the Pier (not pet-friendly, though pets can walk with you on the pier itself).

I’ve also forgotten the details about the Tucson La Quinta, aside from the fact that we chose the Reid Park property — but that’s not surprising. La Quinta hotels are a basic, clean, affordable home base from which you do other things, not destinations in themselves. None of the staff turned cartwheels over Chloe, but there are times when a matter-of-fact attitude is just as welcome as enthusiasm — and when it comes to pet fees, you can’t beat free.