Actually, “hinterland” might be an understatement. Chloe and I and our friend Chandler recently drove from Tampa to Seattle the long way, via Palm Springs, a route that includes the entire width of Texas. Day 14 in Texas (I exaggerate, but not by much) took us from San Antonio nearly to El Paso, and for most of that day we were so far behind the back of beyond that our phones just gave up. The situation (please note that I don’t call it a “problem,” because heavens, that part of Texas is really lovely) was compounded by the fact that we chose to detour to Marfa, a tiny town that gets an inordinate amount of press in the art & design world.

We depended heavily on La Quinta hotels for most of the trip, but they, like cell phone coverage, don’t exist that deep in the heart of Texas (well, looking at the map, it’s more like the kidney of Texas). I was delighted, therefore, to learn that the Hotel Paisano, on Marfa’s main street, is not only charming but dog-friendly — and that one of its original sister hotels, also dog-friendly, is still operating in the town of Van Horn. I recommend both for anyone visiting Marfa, the Guadalupe Mountains, or Carlsbad Caverns. They are both significantly more appealing than any other lodging we saw as we started the next day driving through El Paso, Las Cruces, and Lordsburg.

I have pictures from both Marfa’s Hotel Paisano, where I bought postcards, and from Van Horn’s  Hotel El Capitan, where we stayed. I might have saved myself some effort, because the two hotels are copies of each other, designed by the same  architect and completed in almost the same month of 1930. Each went through good times (the Hotel Paisano hosted Elizabeth Taylor and the rest of the cast of Giant in 1955, for example) and bad times, and both have now been returned to beauty by the same developer. (There were three other hotels originally in the “Gateway” family, but the Hotel La Caverna in Carlsbad and the Hotel El Hidalgo in Lordsburg have vanished; the fifth, El Paso’s Gateway Hotel, exists but only barely.)

Here are daytime shots from the Hotel Paisano. Even if you don’t stay there, you’ll want to visit its excellent shop, and have a drink in its extremely pleasant courtyard. The pet fee is $20 per night, per pet. 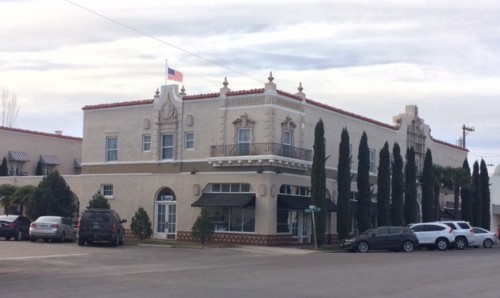 The Hotel Paisano from across the street, on an overcast day. The courtyard is on the left side of this shot; the corner facing you is occupied by an unusually good hotel boutique. 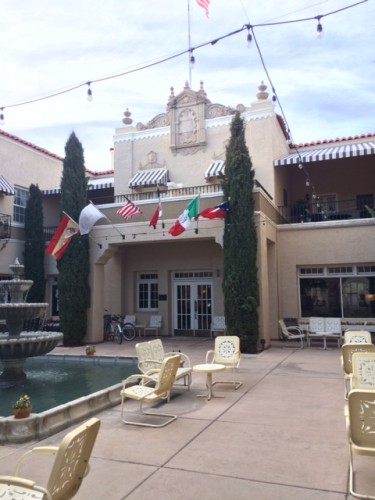 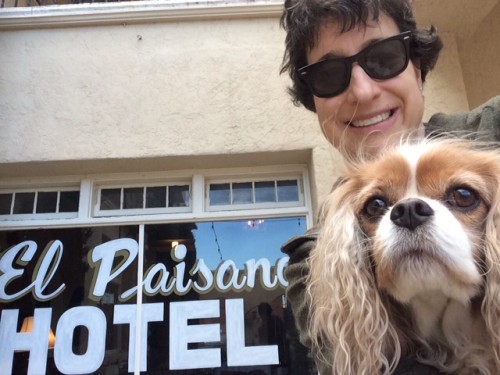 This is the smile of a woman who isn’t quite sure that she, her dog, AND the hotel sign are all in the same selfie.

By the time we reached the Hotel El Capitan, it was pitch dark outside. The neon sign on the roof has been restored, and is once again a beacon of hope for weary travelers. The pet fee is $15 per night, per pet.

Both hotels were staffed by really friendly people, who fell over themselves to pat Chloe. My room at the El Capitan was modest but scrupulously clean, and overlooked the courtyard. Because the hotel was completely restored after the previous major tenant, a bank, had ripped out all the bathrooms, my room’s bathroom was absolutely up-to-date (despite its vintage appearance). 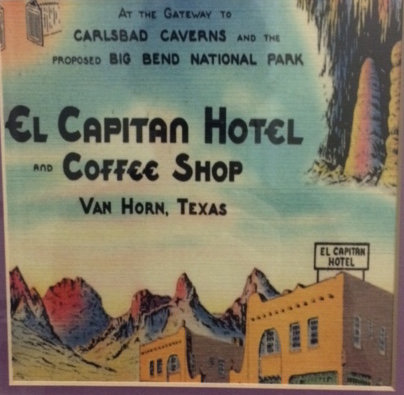 A vintage postcard of El Capitan, hanging in one of the hallways. That sign on top has been restored, and welcomed us as at the end of a long, dark road. 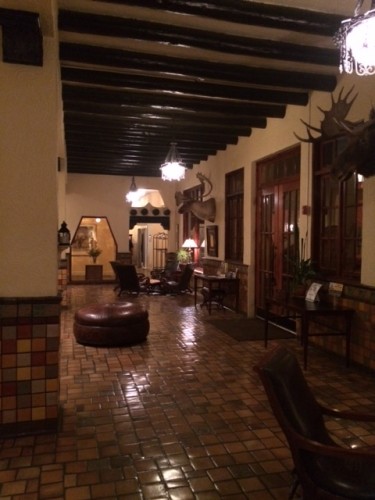 The tiled lobby. Just behind me is a cozy lounge with a working fireplace, leading into the dining room. 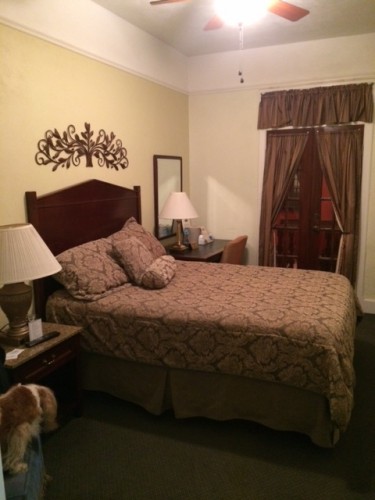 My room, looking a little stark with just the overhead light on. (Chloe’s in the foreground, yearning to be on the bed, but I haven’t yet put down the drop sheet we travel with.) 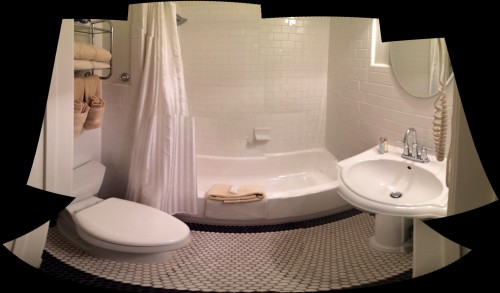 One of my beloved panorama shots of the bathroom — here, despite distortions, to show you how clean and well-appointed it was. Also, thumbs-up for the water pressure. 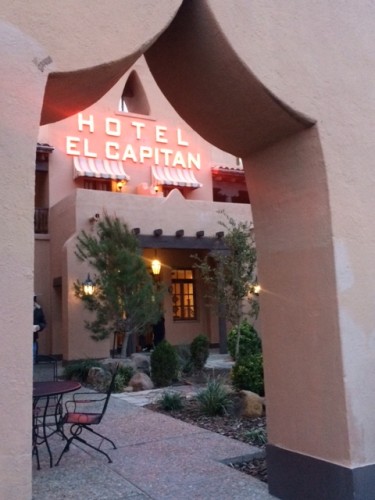 An early-morning departure shot of the courtyard.

I didn’t have dinner at the El Capitan, because I have a serious nut allergy and the hotel’s signature dish is a chicken cutlet in a pistachio crust, but Chandler reported that it was a tasty meal. If I had to complain about something (and I did, in the hotel’s comment form), it’d be the mixed drinks, but that’s easily solved: When you visit, have a beer instead, and toast your good fortune in finding two such beautiful, comfortable, and dog-friendly places to stay in remotest Texas.