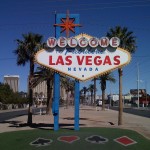 I’m thrilled to announce that this post is now out-of-date. Since I first wrote it, THEhotel and the Cosmopolitan opened their doors to pet dogs, and today (12/18/10) I learned that eight more hotel/casinos (seven of them on the Strip) have joined them.

This one surprised me, for some reason: There is only one hotel on the Strip that welcomes dogs, and that’s the Four Seasons. It’s located at the south end of the Strip; while it doesn’t have any casino facilities itself, it’s next to (and above) Mandalay Bay. A customer service representative told me that small dogs (under 25 lbs.) are welcome, for no additional fee. There may be up to two dogs in a room, but together the dogs may not weigh more than 25 lbs.

All the rest of the hotels on the Strip only allow service animals. The following hotels have published pet policies: The Venetian, New York New York, Excalibur, Mandalay Bay, Monte Carlo, Mirage, and Circus Circus. The rest told me about their pet policy in phone conversations: The Wynn, the Bellagio, Paris Las Vegas, Harrah’s Las Vegas, Ballys Las Vegas, Caesars Palace, the Rio, the Flamingo, the Imperial Palace, the MGM Grand, the Tropicana, the Luxor, and Planet Hollywood (which used to be the Aladdin).

How about hotels slightly off the Strip? The Las Vegas Hilton is not dog-friendly, but the new Westin Casuarina Las Vegas is. The Westin is right behind Ballys, on E. Flamingo Rd., and it welcomes dogs under 40 lbs. There is a one-time $35 cleaning fee, and a $150 refundable deposit. Marriott’s Grand Chateau does not allow dogs, a customer service representative told me, but the Marriott Residence Inn Las Vegas Hughes Center (two blocks east of Caesar’s Palace) and the Residence Inn Las Vegas Convention Center (a block east of the Encore at Wynn) are both dog-friendly. There’s no weight limit on the dogs that can stay, and you can have up to two dogs in your room; there is a $100 non-refundable fee.

In a different price range is the La Quinta Las Vegas Tropicana, located two blocks west of New York New York. Guests with dogs over 50 lbs., or more than one dog, will be charged a one-time $30 fee. If your dog is under 50 lbs., there’s no fee. Another, more attractive La Quinta (the La Quinta Inn & Suites Las Vegas Airport-Convention Center) is located about the same distance east of Ballys. Just east of the MGM Grand, on E. Tropicana, is the Motel 6 Las Vegas Tropicana — like all Motel 6 properties, it’s pet-friendly (and if you’re dog is AKC-registered, you get a 10% discount!).