This started out as a post on Dog Jaunt’s Facebook page, but reader Marie kindly agreed that I could repost it here on the blog, where it wouldn’t scroll away. Olive is a cross between a Sealyham Terrier and a Connemara Jack Russell Terrier (officially, a “Heritage Connemara Jack Russell,” part of a project to ensure the survival of the Irish Jack Russell). Marie bought the Sleepypod Air (here’s my review of it) in the dark chocolate color — very pretty, and a nice change from black, but still dark enough to minimize its apparent size.

As Marie says, she and Olive were in an aisle seat; I don’t know precisely which version of the 737-900 they were on, but in all likelihood their plane had this layout; they were on the right side of the plane, probably in Rows 8-12.

“My new puppy, Olive, and I flew from Boston to San Francisco on a United 737-900. This is a photo of her under the seat in front of me in her Sleepypod Air In-Cabin Pet Carrier. She fit just fine even with the ends not folded up. I confirmed with the flight attendant that they were fine with this. We were in an aisle seat in Economy Plus which made the leg room decent. I am not sure I could handle this in the regular seats.” 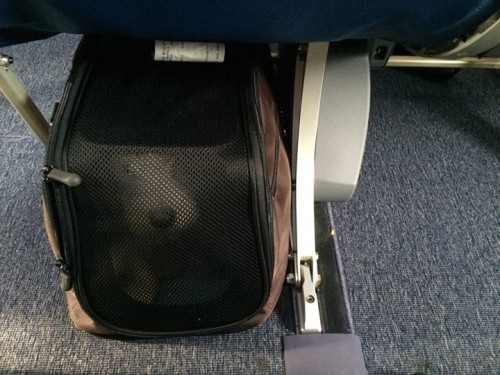 A nice fit, even with one of those dratted aisle rails narrowing the available under seat space

Thank you so much, Marie! And welcome to your new home, Olive! I’m tagging this post so that it joins Dog Jaunt’s growing collection of pictures of carriers in action on planes.