I was gathering gear to pack for our trip to Paris — but this could apply equally well to New York or any other city where small pets in carriers are allowed on public transit — and once again I had to decide how to juggle my need for a purse (to carry all my gear, plus a substantial amount of Chloe’s gear) and the need to bring along a dog carrier for use on the metro or bus.

On a previous trip, I purchased a very attractive dog tote and used it as a purse — but when it came time to put Chloe inside, all of the gear I’d been carrying had to be transferred, clumsily, to various pockets in my coat or my husband’s coat. (To date, the only around-town tote I’ve seen that’s both large enough for Chloe and equipped with really substantial side pockets is the crazily-expensive Tumi tote.)

Alternatively, I’ve packed a sling carrier, which can be rolled up into a water bottle-sized cylinder and tucked into one of my purse’s water bottle pockets, but it’s tricky to get Chloe into, especially in a hurry — and since it has an open top it doesn’t actually meet the requirement (typical of most public transit systems) that your small pet be contained in her carrier.

The approach I’ve taken this time has worked like a charm: The SportPet carrier (available from Target) collapses and twists into a round coil about 6” across and about 3” deep. It weighs hardly anything at all. It lives in a corner of my purse, and, because it’s stored under pressure, pops rapidly open to receive Chloe.

When it’s fully open, it measures 19” long, 11” tall, and 11” wide. It has mesh panels on all four sides and the top. Chloe enters the carrier through the top panel, which has a double zipper. Two handles dangle on each long side, and can be gathered up to carry your pup by hand; there is also a surprisingly comfortable shoulder strap.

There is no padding on the bottom — the carrier is literally just six sheets of nylon (and mesh) edged with wire. That hasn’t bothered Chloe. When she’s on my lap, she’s effectively directly on my lap and all the cushioning that provides; and the carrier does a surprisingly good job of maintaining its integrity when it’s being carried by hand or over a shoulder. The base dips a little under Chloe’s weight, but the carrier stays essentially rectangular, and Chloe’s shown none of the anxiety she clearly feels in the sling carrier I mentioned earlier. 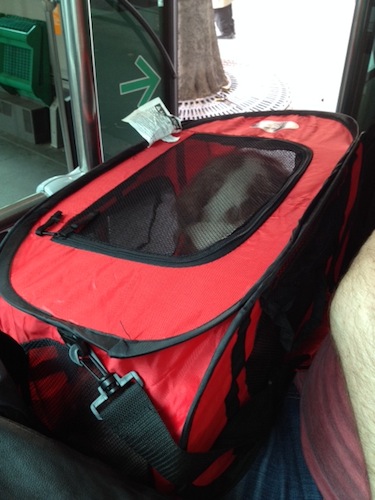 Chloe in the SportPet carrier, on a Paris bus, on my husband’s lap 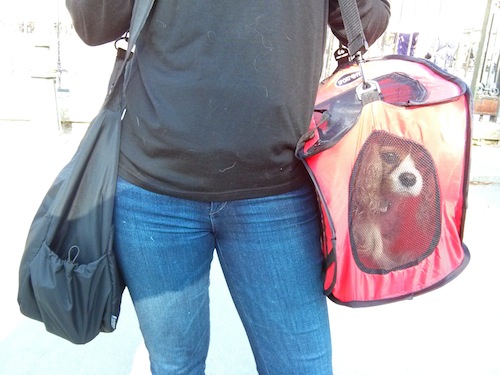 Purse over one shoulder, Chloe over the other — as you can see, that purse is plenty large enough to hold her folded-up carrier, plus heaps of other essential gear. Remind me next time to roll the pet hair off my torso before having my picture taken….

I own three of the SportPet carriers, partly because they feel a bit flimsy, and I can’t believe they’ll be long-lived — but more because it’s so rare to find a collapsible carrier suitable for a large small dog (in fact, I think the SportPet may be unique) that I live in dread of the product being discontinued. After this trip, I think I’ll buy a few more, just to be safe — the carrier’s made that much difference to my happiness as a traveler. [10/23/13 After two weeks of intensive use, Chloe’s SportPet has sprung a leak — one of the corners of the bottom panel has started to lose its stitching. Next time I’ll pack multiple carriers, assuming that each will only survive for about two weeks.]

Please note that, as with those car windshield screens we’ve all wept over, there’s a technique you have to master to get the SportPet to return to its original coiled state. I’ll be honest: The first one I bought stumped both me and my husband (in our defense, the included instructions are completely useless) and I ended up giving it to Goodwill. This time, I paid close attention to how the carrier uncoiled, and now I can confidently assure you that I have the technique and can teach it to you.

That leaves only one tiny fly in the ointment: Once you have twisted your SportPet into a thick pancake, the only thing keeping it from flying back open is the round of black elastic it came with. Do not lose that elastic! In fact, go ahead and add another substantial, extra-long rubber band to the black elastic, which can use a little reinforcement. And pack a couple more, in case you lose one or both of those restraints. A couple of times now, my lone black elastic band has slipped, and the SportPet has thrashed around, uncoiling, in my purse.