I’ve singled out NYC in the title of this post because I hear about this issue in connection with that city’s subway — and here’s why: The rules for bringing a pet onto the New York City subway say only that your pet must be “enclosed in a container and carried in a manner which would not annoy other passengers.” They do not include the words “small” or “lap.”

New Yorkers have noticed both of those things, and they search for workable ways to carry their big dogs on the subway. One option I learned about years ago is a wheeled carrier that Celltei first made for a 50 lb. Portuguese Water Dog — it’s a beauty, but it’s also just shy of $600.

Reader Leann saw the Celltei carrier and had the same reaction most of the rest of us have: Nice, but, dang. She wrote and asked me whether I’d seen the XL Pet Life 360° Vista View House, a carrier large enough that in one comment on Amazon, a user noted it was too large for her 50 lb. shepherd mix. I hadn’t, and I asked her to let me know if it met her needs.

The Pet Life carrier ended up being way, way too much carrier for Leann and Joy, her 40 lb. Vizsla (“It was huge and probably heavier than the dog crate that I used for the airplane ride from Hungary. It was incredibly heavy and had large metal bars. There was no way that I could handle carrying it with my dog”). Back to the drawing board, and this time, Leann came up with an ingeniously simple idea.

She had seen this post on Martha Stewart’s site, about converting an L.L. Bean canvas tote into a pet tote, and decided to do the same thing, but much bigger. Leann bought the same classic tote but in the XL size, and with the extra-long handles. She ended up not cutting the neck notch out, as Martha suggests, because her pup “has long legs and doesn’t need it.”

The verdict? Totally successful: “It works great. Perfect and light. The bottom is sturdy for her to stand in and I will probably buy some faux Sherpa [fleece] to line it. It’s great for subway rides in the city.” Here’s the first picture she sent: 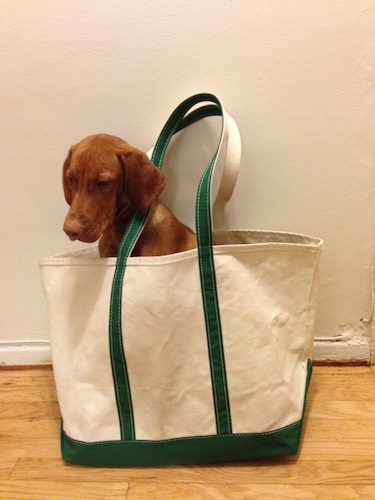 This whole idea knocks me sideways, it’s so smart (granted, it’ll only work if your back has the strength and structural integrity it takes to carry a 40 lb. dog over one shoulder). I have just two issues to raise with it, and neither is a deal-breaker. The first is that those totes (and I have a million of them, roughly speaking) can only be spot-cleaned. If they go through a washer or, worse, a dryer, they get all soft and floppy (wrinkly too, but that’s cosmetic). Spot cleaning works remarkably well, but after a while the spots will win. The totes are reasonably priced, though, so it wouldn’t break the bank simply to buy a new one at that point. You could buy the nylon option (presumably easier to wash), but it doesn’t come big enough for a big dog, and lightweight nylon is much floppier than thick cotton canvas — I suspect your dog would end up feeling like she was dangling at the bottom of a plastic grocery sack.

The other issue is whether an open-topped tote meets the rule that the pup is “enclosed in a container.” It hasn’t been a concern for Leann, so far: “She hasn’t had issues of jumping out, and I thought about getting the zippered version but I think it would have jutted into her neck, when I looked at it.” As you can see in the picture below, “the top of the bag naturally closes over her. If it ever becomes a problem, I envisioned getting mesh fabric and sewing a flap that I would secure with a zipper or snaps.” 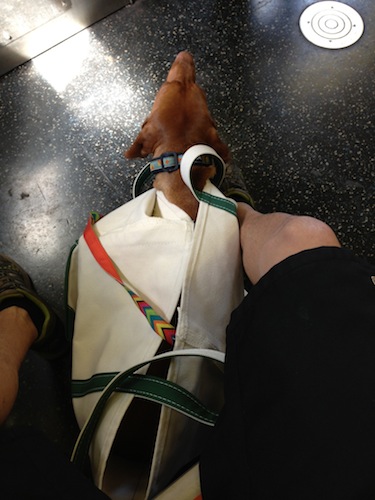 The carrier in action on the subway

If it were me, I’d buy an XL tote, just as Leann did, but I’d get it from Land’s End (which makes a significantly bigger XL tote than L.L. Bean’s), because I’d get it with the zippered top. Perhaps I wouldn’t use the zipper every time, but if I were challenged, it’d be there to close over my dog’s head. How about airflow, in that case? The New York subway system can be beastly hot, as many of you know all too well. I’d copy a feature I’ve seen in a couple of carriers and put twenty or so huge grommets in each of the bag’s ends.

To satisfy my own curiosity, I bought a grommet kit in the biggest size I could find (I got mine at Seattle Fabrics, an outfitter for adventurous, crafty types, but I’ve provided an Amazon link, below) and I installed a sample grommet in the end of a tote I had lying around. It worked fine, and wasn’t hard at all — be sure to use a mallet, not a hammer (not gonna lie, I also used a couple of very gentle taps from our sledgehammer right at the end, but a hammer is really not a good substitute — it just has too small a whacking area), and be sure to point the bigger piece of the grommet inwards, so the pretty side of the assemblage faces outwards. 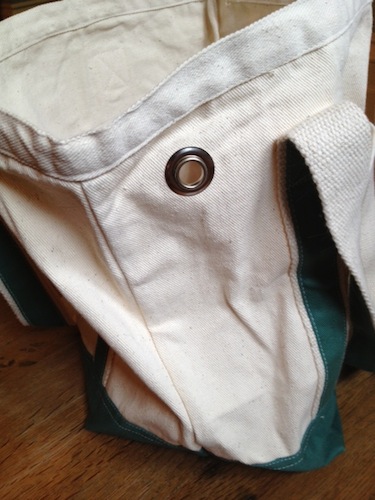 Here’s what it looks like when you poke the bigger piece of the grommet OUT of the bag — not tragic, obviously, but not as sleek as it could be. Please note, for scale, that this tote’s handles are 1.5” wide.

As you can see, each grommet will create a really substantial hole, and you’ll be able, in a pinch, to zip your pet completely into the tote without worrying that she’ll expire before you reach your destination.

Please note that while the grommet kit is pricey (right around $35), there’s no reason it wouldn’t last, essentially, forever (you’ll need a new piece of wood every so often). The grommets themselves are not expensive. They come in brass, nickel-plated brass, and a darkened, near-black finish too. The biggest size grommet I could find, and I think it’s as big as you’d need, is Size 4, which has a 1/2” opening (the grommet itself is 1″ wide overall).

This is such a wonderfully practical and affordable idea, Leann. I’m confident you’ll be seeing more big dogs in totes on the subway in the future, and it’ll all be thanks to you!