Long Beach was the second airport pet relief area I wrote about. In early 2009, a month after we brought Chloe home from her San Diego-area breeder, we flew back down to California — but this time to Long Beach. Here’s what I said back then:

While there is no official pet relief area at this adorable airport, it’s so small that you can rapidly exit and find a patch of greenery outside the baggage claim area. My favorite is the bit of lawn under the flagpoles, pictured at right. There is a poop bag dispenser at this location, and another near the south crosswalk by the outside snack shack (look for the phone booths — the bag dispenser is next to them).

Brief, right? And the picture I included was tiny. 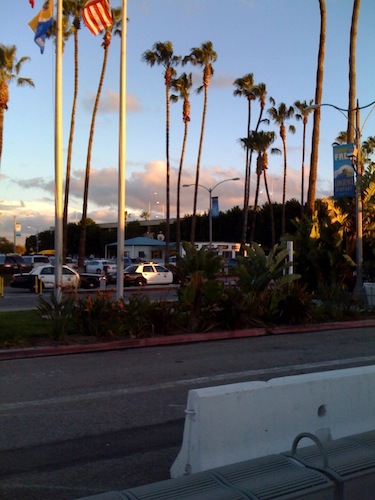 Here’s the same picture I posted in 2009, but much larger. The old terminal is behind my back and to my right.

I’ve learned a lot since then — well, at least I’ve learned to make the pictures as big as possible! — but the basic information about LGB didn’t change much (we return there every February) until this spring, when the airport’s never-ending renovations finally…ended.

So what’s changed? The old terminal, a blast of nostalgia from the early days of commercial flying, is still there, thank goodness, and it remains charming. The green poles holding poop bags also remain, in their same locations, and it’s still nicest to take your pup to the grassy patch under the flagpoles. What’s new is the new terminal, of course, which is not only lovely but also has a kind of indoor-outdoor area where I wouldn’t have encouraged Chloe to pee or poop — it’s not equipped with grassy patches or poop bag poles — but where it did seem okay to let her out of her bag to stretch her legs.

How I love my panorama app — this is the full length of the new walkway/”patio” area, with the entry to the actual new terminal to the right and the exit to the left. Please note that the wall of glass windows facing me is, in reality, flat.

I suspect people don’t change flights in Long Beach, but rather just arrive there or leave from there. If you’re arriving there, the new space won’t change your pet’s life — you’ll just dash out together to the pet relief area, collect your bags, and head off into sunny SoCal. If you’re departing from Long Beach, though, you’ll love the new space. You’ve arrived early, right, because you just do, and you’ve taken your pup to the pet relief area. You’ve checked in, and now you have some time on your hands. Normally, at this point, Chloe is zipped into her bag and waiting next to me at the gate for boarding to begin, because where else can she be? At Long Beach, now, she can wait with me in what’s really a large walkway/patio connecting the terminals. We’re only a minute away from the gates, so I’m not nervous, and Chloe can be out of her carrier and poking around, or snoozing, as she chooses: 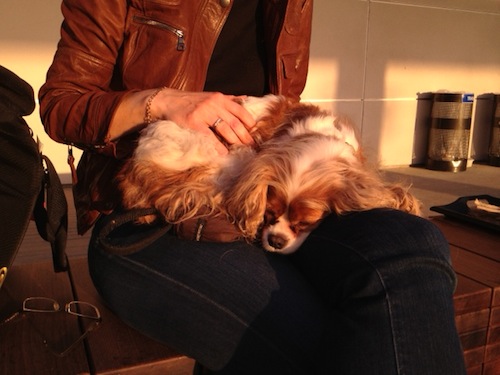 So much nicer to wait for a plane this way than being zipped into her carrier.