Thanks to reader Eliot, I learned today that San Diego has added another pet relief area to its line-up, and this one is on the air side of security! Although the room is small, and the area to pee on even smaller (see the picture, below), that’s huge news. It takes about an hour, when all goes smoothly, to exit an airport SAN’s size, find the land-side pet relief area, convince your dog that the place and time are right, and then return through security. An air-side pet relief area, even one tucked at the far (and I mean far) end of Terminal 2 West, is a win for travelers with dogs (I only know of two others, one at Seattle’s airport and the others at Washington’s Dulles airport). 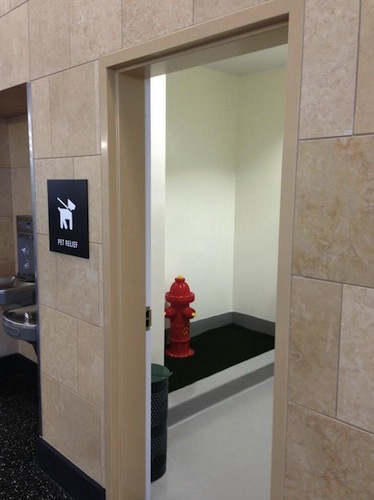 The traveler’s aide I spoke to at SAN tells me that the new indoor pet relief area is up by Gate 45, or maybe Gate 46, and that I’ll see signs for it as I approach it.

San Diego was the first airport Chloe and I visited together, when I picked her up from her breeder and flew her home to Seattle. Here’s what I said then about one of SAN’s outdoor pet relief areas, located between Terminals 1 and 2. There is reportedly another one at the west end of the Commuter Terminal (as you’re facing the terminal from the outside, the west side is on the left; exiting the terminal, you’d turn right).

Thanks so much, Eliot! I’ll be adding this post to the entry for SAN in Dog Jaunt’s handy guide to airport pet relief areas.