The last time I wrote about visiting Colonial Williamsburg with a dog, it was 2009 and I hadn’t yet been there with a dog. Now, after a week-long visit with Chloe and husband, I have more details to offer (I am happy and relieved to report, however, that nothing in the earlier post is wrong).

Chloe in the stocks -- entirely undeserved, because she was, in fact, a very good dog

Fast forward to December 16, when the three of us approached the Colonial Williamsburg Visitor Center complex, home of, among other things, the Woodlands Hotel & Suites (also of the Cascades Motel, but by this time I’d forgotten that we were staying there — you check in for the Motel at the desk of the Woodlands Hotel, which is one rung higher on the Colonial Williamsburg lodgings quality ladder). We arrived after dark, and it took an astonishingly long time to find the Woodlands Hotel entrance. There is signage, but it leads you through remote parking areas drifted over with pine needles, past laundry facilities, a darkened conference center, and what turned out, after a flurry of hope, to be a YMCA Child Development Center.

My advice to you is persevere, and follow the signs. Ultimately you will reach the front desk of the Woodlands Hotel (and the unfailingly cheerful and helpful front desk staff), who will remind you that you are in fact staying not there but at the Cascades Motel, and that the Motel rooms only have two double beds or one double bed and a single bed. They will give you a map to find the Motel, and they will highlight a bit of woods across the street from the Motel where you’re encouraged to walk your dog.

When you find it, you will realize that you passed the Motel several times during your wanderings around the complex, but hadn’t spared it a glance because it looked abandoned. A one-story structure shaped like a boxy “S,” the Motel was surely built in the 1970s and hasn’t been touched since. There is no landscaping, the parking lot (empty when we arrived, and nearly empty until just before we left) is starting to disintegrate in that way that old parking lots do, and there are few outdoor lights. There are woods behind it (the home, we soon learned, of an eery “Fun Zone”), and woods across the street, and frankly, it’s a creepy place at night. 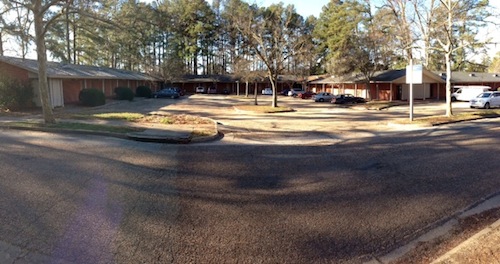 Here's the Motel in daylight -- much less creepy, and at the end of our stay, we had neighbors

We’re made of stern stuff, though, and in we went. The rooms are small but pleasantly furnished, and we chose to remain at the Motel for the week we’d reserved. Would we return? No. For us, the negatives outweighed the positives. Your calculations may be different, so I’ll give you the pluses and minuses, and leave the decision to you.

What we liked: There was excellent water pressure. There were no bed bugs. The furnishings were more attractive than those of, say, a La Quinta or a Motel 6. The bathroom, though vintage 1970s, was clean. There was an included continental breakfast each morning in the restaurant area of the Woodlands Hotel, a short walk away through the Fun Zone. Because we were staying for more than 4 nights, we were given two passes to the Historic Area (about a $100 value, for the two of us). We could walk from our hotel room into the Historic Area via a walkway and footpath. There were laundry machines in the Woodlands Hotel (the two at the Motel were broken when we arrived, and were still broken when we left). There were plenty of walking opportunities for Chloe, though we avoided the recommended bit of woods after a fellow guest told us she’d picked up chiggers there over the summer. A floor-level strip of windows delighted Chloe with views of the many, many squirrels outside. Our total cost was very low. 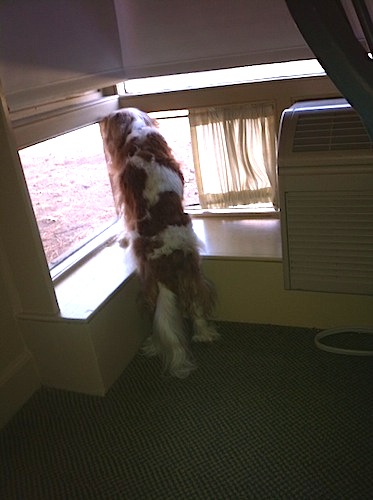 Chloe, pasted to the window, looking at squirrels

What we didn’t like: When she walked in, Chloe sniffed many, many places on the carpet very closely, and then peed on it. While Chloe is by no means perfect, that’s not something she has ever done before — and indeed, she had just peed outside. She was certainly marking a carpet that had been marked by many previous occupants. I cleaned up Chloe’s spot with enzymatic cleaner, and my husband and I made a point of never putting our bare feet on the carpet. The heater was antiquated and noisy. The walls were thin. There was no wifi, and no cellular coverage (we use AT&T). The nearest wifi was in the lobby of the Woodlands Hotel, and wasn’t what I’d call powerful.

For us, the lack of wifi and the Carpet of Pee were the deal-breakers. Next time, we will spend a little more, stay in a nearby hotel, and access the Historic Area by driving our car to the Visitor Center, if necessary, and walking in from there. The two places I’ll be checking out are the Williamsburg Manor Bed & Breakfast (walking distance to Merchant’s Square and the Historic Area) and the Residence Inn Williamsburg (about an 8-minute drive from the Visitor Center).

I am devoted to Colonial Williamsburg. As long as it’s not too hot or crowded, it’s one of my favorite places to be — I love walking the streets of the Historic Area, and stopping to chat with the sheep, and stepping in to watch a printer or a blacksmith or a cooper at work. This was my first wintertime visit, and I can thoroughly recommend it. If possible, visit during the week — we had the place nearly to ourselves from Monday to Thursday, but even the Friday and Saturday weren’t terribly crowded. And the Christmas decorations were a revelation. It took a moment or two to blot the memory of 21st-century bling from my mind, but once I did, the colors and materials of the wreaths and swags were vivid and clever and eye-catching. 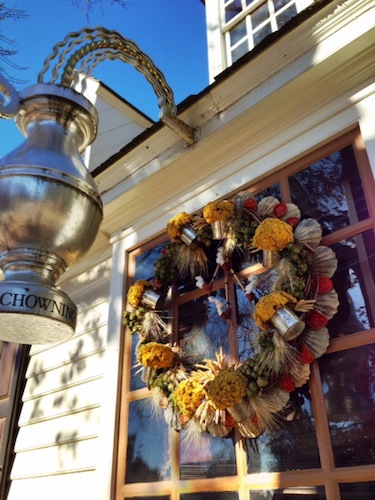 With Chloe, we were welcome to walk on the streets and sidewalks, in the Bruton Church graveyard, and through the gardens behind nearly all the properties on Duke of Gloucester (nicknamed “DOG”) Street. We were not allowed into any of the buildings with her, nor were we allowed to bring her into work areas — even the open-air work areas like the cooper’s and the blacksmith’s. Chloe’s messenger bag saw some use — as you know, I’m thoughtful about rules, but concluded that an entirely-enclosed dog would not cause anyone problems in an outdoor workshop. A new addition to the Historic Area is an outdoor market (“Market Square”), located next to the Magazine, so you and your dog can do a bit of shopping together without breaking any rules. 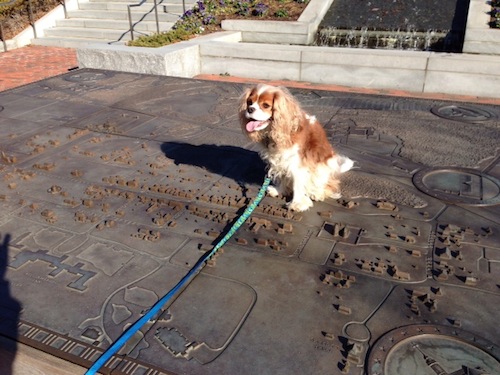 Chloe, with the Historic Area at her feet

It was too cold to take advantage of the outdoor patios at the King’s Arms, Chowning’s and Christiana Campbell’s taverns (the King’s Arms is the best of the trio, followed closely by Christiana Campbell’s), but getting sandwiches from The Cheese Shop worked well. Read the menu online, phone in your order, and tell them you’ll pick it up at the outside window (located along the right side of the building). There are tables under heaters near the pick-up window, but we just took our sandwiches to a sunny bench in Merchant’s Square and people-watched.

Please note that lap-sized dogs are allowed on the shuttle buses that circulate around the Historic Area. They needn’t be in a carrier. When you’re catching the shuttle at the Visitor Center, look for the outdoor path that leads to the departure area. Similarly, if you’re walking to the Historic Area from the Visitor Center, look for the outdoor path to the bridge walkway. We walked Chloe through the Visitor Center once, not yet knowing that those paths existed (the entrances to both are on the right side of the building, as you face it with the bronze town map at your back), but it’s frowned on.

I should also mention that Chloe had plenty of company in the Historic Area, and that she and the other dogs I saw were greeted with enthusiasm by visitors and CW staff alike. We had been told at the hotel that Chloe would be popular in the Historic Area (“they’ll eat her up!”), and a truer word has never been spoken.

We also took side trips to Historic Jamestowne (we opted not to go to Jamestown Settlement, a living history interpretive site) and Yorktown. At Jamestown, dogs are allowed to walk everywhere but in the buildings. 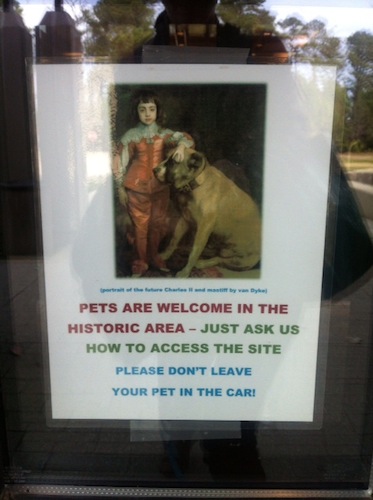 Sign on the door of the Historic Jamestowne visitor's center

I’d be lying if I told you we didn’t messenger-bag her into the café, but I drew the line at bringing her into the Archaearium. We carried her in our arms into and around the reconstructed 17th c. church. To get to the walkway that leads you from the Historic Jamestowne visitor’s center to the site, walk around the left side of the building and go through the metal gate you’ll find in the back. Jamestown — fort and ruined town — is rich in squirrels, so Chloe was happy, and it’s a fascinating place for humans.

As you’re heading to Jamestown, you’ll see signs for the Glasshouse, and you should take the detour. Who knew that the settlers tried to start a glass industry? Next to the glass furnace ruins is a working reconstruction — doubtless a slice of hell in the summer, but a blessed source of warmth, and interest, on a cold December day.

We ran out of time at Yorktown, and never made it into the town, but Chloe could have joined us on our walk there. She was welcome to walk with us on the battlefield, which was nicely explained via a couple of driving tours that step you through the preparations for, and events of, the 1781 siege. Dogs must be leashed, and everyone, including dogs, should stay off the earthworks.

Essential gear for Chloe included her stealthy messenger bag, a sturdy raincoat, and a water bottle. I had opted not to dose her with Frontline Plus before we left (it’s a town! it’s the winter!) and that was a mistake. We found three ticks on her snout during our first Cheese Shop lunch, and spent too much time driving to the Petco for another box of tick doom. If you stay at the Cascades Motel, pack a small flashlight to bring with you on nighttime walks (I also recommend bringing slippers, and some way to heat water for tea/coffee and a couple of mugs). Carry at least one small umbrella.

In the summertime, the list would be different, as I mentioned in my earlier post. Williamsburg, at its worst, is hot and drenchingly humid. You’ll want a water bottle and a cooling jacket for your pup (my current favorite is the Chillybuddy jacket), and you’ll want to minimize the time she spends in her stealth bag. You will want to wear a hat, and sunscreen, and keep yourself hydrated. Consider donating $100 to Colonial Williamsburg; if you do, you get access to the St. George Tucker House, located just off Palace Green, and an oasis of A/C and cold drinks on a hot day (and warmth and hot drinks on a cold one). Speaking from experience, you can donate in advance, or you can donate by phone as you’re standing in the front walkway of the Tucker House. There is a bit of wifi there, in the old kitchen.