If you have a very small dog — say, under 10 lbs. — you have it made, as far as flying goes. There are any number of charming over-the-shoulder carriers that slip easily under your seat, and if you (like me) have an iffy back, you can find wheeled carriers that also work well. If I were you, I’d buy the Creature Leisure Pet Pilot XL, and call it done. [1/31/13 Phooey!! It looks like this product has been discontinued.] In fact, I did buy the Pet Pilot XL for Chloe — but it’s just a hair too small for a 13 lb. dog. Sadly, so is every other wheeled carrier I’ve found — except the large wheeled Sherpa bag, which is way too vast to fit comfortably under an airplane seat and wobbles horribly behind you if you walk at anything faster than a trudge.

Fine, you say, I’ll just put my dog’s carrier over the handle of a wheeled carry-on, and the carry-on will let me roll with my dog through the airport. Although that’s an excellent solution if you’re traveling with a companion, it won’t work if you’re on your own. Your dog’s carrier officially takes the place of your carry-on, leaving you with room only for a “small personal item” (which has to be stowed in the overhead bin, since your dog’s carrier is in the under-seat space).

So imagine my excitement when I saw, in the Magellan’s catalog, a wheeled carry-on that has a detachable shoulder strap and looks plausibly like a small personal item — here it is on the ground, with its handle extended: 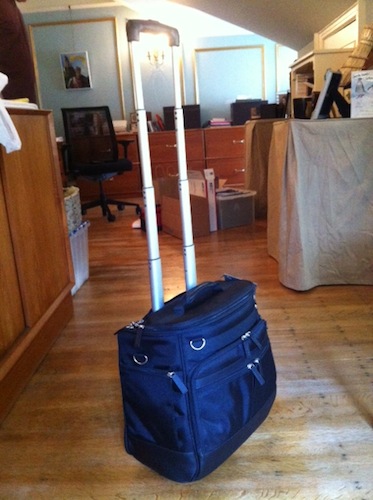 And here it is with handle tucked away, and strap attached: 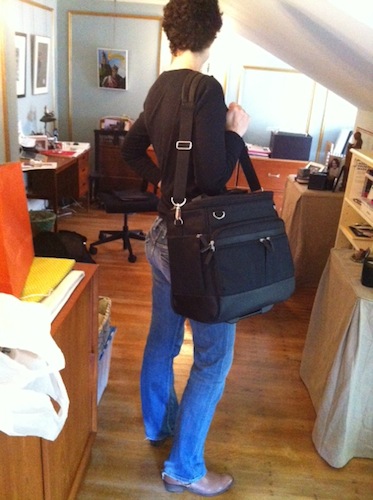 I’m not going to say it’s small, but it’s no bigger than some purses and backpacks I’ve seen. The strap is the key feature, I think, that makes it seem less like a carry-on — plus, once it’s over a shoulder, the handle and the wheels are out of sight. Roll to the gate, then board with it over your shoulder and your dog’s carrier in your other hand, and I can’t see anyone stopping you. It’s a nice design, too — there’s a big central area, uncluttered by internal pockets or file folders, a Velcro-closed pouch under the lid for your 3-1-1 bag, and several outside pockets. One word of caution: Despite what the product description says, the side pockets could fit a slim umbrella, but a water bottle? Not any water bottle I’ve ever seen.

Actually, two words of caution. Part of the reason the Getaway Wheeled Under-Seat Tote is plausibly purse-like is that it’s not as deep as most carry-on bags. Instead of being 11″ deep, it’s only 7.5″ deep. Chloe’s preferred in-cabin carrier, the large SturdiBag, is 12″ deep, so it sticks out about 4″ when it’s in place above the tote (pet carrier sizes vary, but yours too is likely to stick out a bit). Keep an eye — and, more importantly, a hand — on the assemblage, once your dog’s carrier is resting on top of the tote, so the whole thing doesn’t tip over.