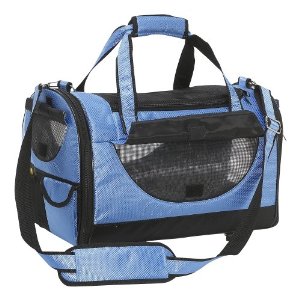 As you know, I’ve long been searching for a good wheeled dog carrier that will work for in-cabin plane travel. I own one — the Creature Leisure Pet Pilot XL — but it’s just a hair too small for Chloe. I was excited, therefore, when a reader asked me what I thought of Pet Gear’s “World Traveler” carrier: It sounded like it was about the right size, and it had wheels. I was intrigued enough to order the bag and check it out in person.

The verdict is: Almost, but not quite. It’s a fairly attractive bag, and it’s not cheesily-made. It depends, structurally, on one very long zipper, which is annoyingly balky but seems substantial enough to do its job. The point of the long zipper is that between uses, the carrier can be collapsed into a flat packet. It doesn’t have a mesh panel on top — always a pet peeve of mine — but it does have sizeable mesh panels on all other sides. One effect of that? There are only two tiny pockets, located on one of the ends. Between the two pockets is a single, short vertical strap, through which a seatbelt can pass. I prefer a carrier with at least two seatbelt straps, and on the long end, so that your dog is secured at two points to your car.

Although it’s about the same size as the large SturdiBag (it’s an inch taller), it doesn’t compress like its competitor. It would have to rest on its side under your seat, which would mean you’d have to de-Velcro the base pad and move it around to the side (the sides are, like I say, mesh panels — not padded), or carry some additional padding with you. However, the stiffness of the ends and the bottom mean that it cannot compress, even lying on its side, to fit in a space shorter than 11″ tall — and too many airlines have spaces that are shorter than that. You could turn the bag around and poke it in, on its side, top first (so the fattest, bottom end was pointing towards you) — that way, you could jam most of it into a space that was 10″ tall but no shorter. But then, of course, none of the mesh panels would be facing you, which I think would be pretty horrifying for your dog, even just for takeoff and landing.

This carrier’s shoulder strap doubles as its handle — you remove the strap, then clip both of its ends to a loop on one end of the bag. The resulting structure rolls, but at a great distance behind you (which is awkward in a crowded airport); it’s difficult to steer; and it wants to topple over. On balance, I don’t think the wheels make up for this bag’s drawbacks.