We recently flew on a United 777 Overwater from Washington-Dulles to Charles de Gaulle. According to SeatGuru, the 777-200 we traveled on is called a “Worldwide 2” (WW2). I was in seat 21A, in Economy Plus, and my husband was in seat 13H, in Business (we had to sit separately, since Chloe was not allowed to travel in Business). Once again, I strongly recommend paying extra for Economy Plus. My seat was cramped enough, especially given the way Chloe’s carrier had to be stowed; I can imagine only too easily how uncomfortable it would have been to travel in Economy. 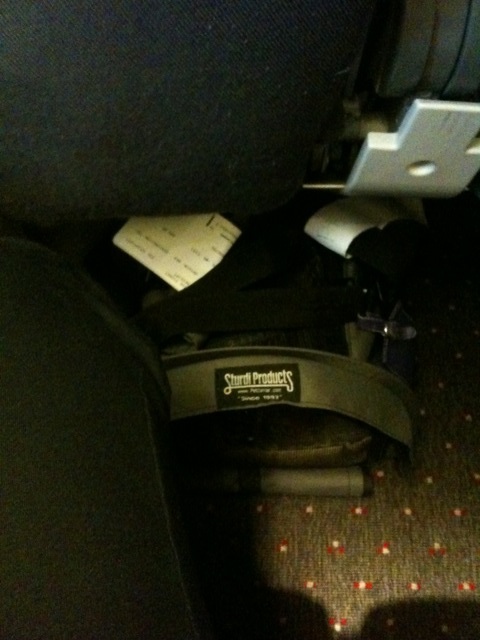 Chloe's carrier, past my left leg

The under-seat space on this plane, at least in Economy Plus, is 10 inches tall. As you can see in the picture, Chloe traveled in her large SturdiBag, and it was a good choice for this flight.

This post is part of an ongoing series recording under-seat measurements of the various planes we fly on. Keep in mind that most domestic and international airlines have rules about the maximum size of in-cabin pet carriers they allow on board (see Dog Jaunt’s handy charts under the “Guides” tab above).