Jane is a long-time friend of Dog Jaunt — she won a giveaway last year, and Emma, her Norfolk Terrier, was featured in a Photo Friday earlier this year. This summer, the family vacationed in New Hampshire and Maine, and Jane sent pictures and a report, which begins in “the heart of the White Mountains,” in Jackson, NH:

We stayed at the Christmas Farm Inn and they were very dog friendly. Emma was not allowed in the main inn, but we did have a nice room (with an antique quilt I immediately took off the bed!). The cost for her was a flat $25 — we stayed 2 nights. We also looked at another inn in the White Mountains, called the Omni Bretton Arms Inn. This place was hot when we walked in, and probably had window A/C units. The rooms were smallish but every single one is dog friendly, so one can book on a reduced rate hotel web site and be assured you will have a pet friendly room. With this hotel, you had access to the Mount Washington Hotel amenities which included very nice restaurants and transportation to get you there. No dogs at the big hotel….

We ventured to North Conway for our third night, this time without a reservation and there are places to stay, but in the height of the summer tourist season it was hard to find a place. We did, at the Hampton Inn, and they were very friendly to her and us. It was the most expensive Hampton Inn I’ve stayed in, but there was no dog fee there. We checked out the Stonehurst Manor — it is a beautiful place but had no availability. We had dinner there and the food was very mediocre despite the wonderful aroma of pizza in a brick oven.

For fun, we drove up to the top of Mount Washington in the rental car, so Emma was able to do that, and to hike around at the top with us. She was allowed on the Wildcat gondola and the train to Crawford Notch, pictures below: 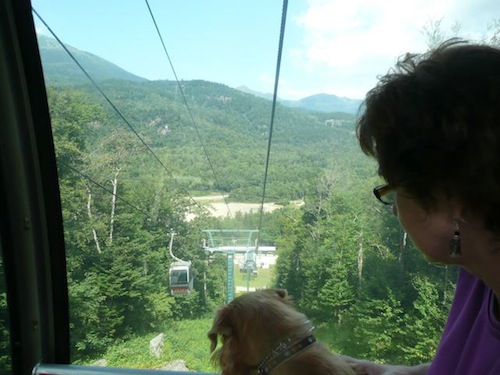 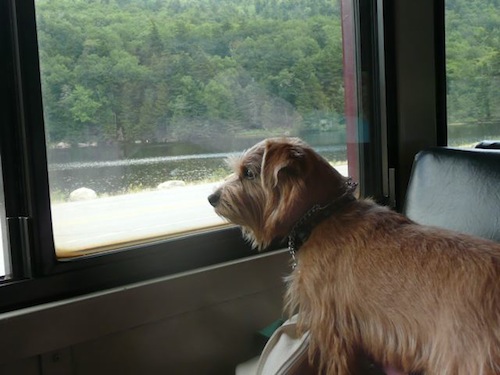 Emma looking out the window of the historic Crawford Notch train

All around the White Mountain National Forest are pull-off areas to hike and explore and we took her to these places. Some required a $3 pass for the day that allowed us to all of the areas we wanted to see. I had read some places didn’t allow dogs, such as ‘The Flume‘ but these did. She had a great time.

And then it was on to Maine, where they were staying with family. They reported favorably on Portland‘s Eastland Park Hotel, however, which let them leave Emma in their son’s pet-friendly room while they went out to dinner.

While we were in Maine, we did a whale watch tour out of Boothbay Harbor and she could have gone with us. We didn’t know, so we left her behind, but it was just as well since we had to keep getting up and moving to one side or the other of the boat to see the whales. I did see a sunset sail in Bar Harbor that allowed dogs, too. That would be fun.

What a great trip — I love how Jane and her husband found activities that interested and pleased both them and Emma. One last picture completes the story: 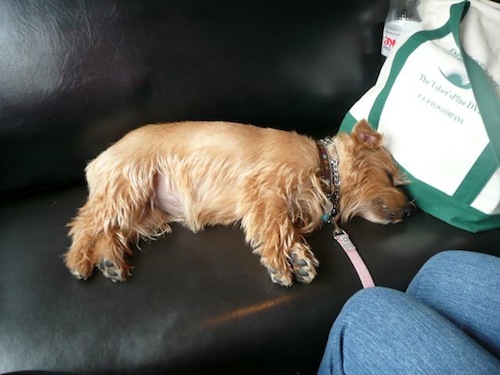 Thanks so much for sharing your trip journal and pictures, Jane! It really helps to see how other travelers make their plans, and hotel reviews are so useful. Anyone else have pictures to share this week? Please post them on Dog Jaunt’s Facebook page, so we can all see them!