This post was handed to me out of the blue by a wonderful Dog Jaunt reader named Tara, living in Rome. She wrote a shorter version of it in a comment on a Chloe’s Clicks post, and I asked her if she’d mind if I turned her comment into a blog post. No problem, she said, and she gave me a few more details, and…hey presto! A fascinating blog post, with no effort from me. I love Dog Jaunt’s readers. 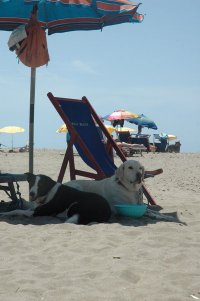 “There is a great beach in Rome, Italy near Fiumincino/DaVinci Airport. It’s called Bau Beach. [Editor’s note: “Bau” turns out to be short for “bau bau,” the Italian version of “bow wow.”] You need a car to get there but it’s a blast. You must bring vaccination papers and with the price of admission Fido gets his own water bowl, a snack and his own little umbrella. There’s a vet on-call. You can rent a big umbrella and chaise lounge. All dogs there are off-leash and for the little guys there is a little pond-type area that’s only about two feet deep. They sell sandwiches too.

Since it’s an activist association (the region has tried to shut them down before and they have successfully sued to stay open) everyone seems to get to know each other pretty well. If you were to go to Rome and not have a lift from the city there’s usually someone going from the city. Last week I just posted an SOS on their Facebook page and someone gave me a lift to and fro the next day. Check out the pictures on their Facebook page. It gives you a great idea of the place.

Their website is in Italian, but I’m sure if you posted on their Facebook page in English, someone could answer you. There’s an American from California who works (or volunteers?) at Bau Beach. I wish you could contact her for more info but I never caught her name… Anyway, even though I used mostly Italian when registering, there seems to be a fighting chance for people to communicate in English…

Oh, another thing about dog beaches I didn’t think of until it was too late. Dogs like to mark their territory. One dog did this on a friend’s backpack and then every male dog that walked by did the same. Though we all just laughed after awhile, it would be smart to bring a trash bag to put your stuff in… Lesson learned!”

And then, as a bonus, Tara added a paragraph about what it’s like living in Rome with a dog:

“I live in Rome and boy, is it a dog-friendly place. Many of the restaurants ignore the health codes and let you bring your dog inside. To have your dog outside at a table isn’t usually even a question. And everyone brings their dogs to the bar (bars there sell coffee and breakfast in the morning, alcohol during the day/night and also sometimes ice cream). There are really no leash laws (or if there are, no one cares) and everyone unleashes their dogs at parks (and there are parks everywhere). When the dogs get dirty they often just jump in the sculptured fountains in the park! The result is very, VERY few aggressive dogs. Instead they’re pretty well socialized and pretty well trained on voice commands.”

Doesn’t that sound just amazingly great? After reading Helen Fazio’s guest post about visiting Rome with her Shih Tzu, Raja, I was champing at the bit to return to Rome — now I’m kicking down the stable door. Thank you, Tara!!