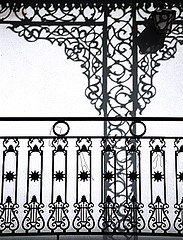 The New Orleans Regional Transit Authority (“RTA” or “NORTA”) operates buses and streetcars in the cities of New Orleans and Kenner. The system was heavily damaged by Hurricane Katrina (flooding ruined dozens of vehicles, damaged tracks and other infrastructure, and made the RTA’s headquarters uninhabitable) but has been recovering. You will have to admire the RTA’s grit and determination from a distance, however, because only service dogs are allowed aboard its buses and streetcars. (I called twice, since the first answer disappointed me so much; alas, that really appears to be the policy.)

The other major public transit agency in the area is Jefferson Transit (“JeT”), which operates buses in suburban Jefferson Parish, including Metairie, Gretna, Terrytown, Harvey, and Marrero. JeT routes essentially ring downtown New Orleans, so they go to plenty of useful places, including the airport. Please note that on weekdays, the E-2 Airport Downtown Express goes from the airport to the corner of Tulane and Loyola, right in downtown New Orleans (on weekends, the bus only goes as far as Tulane and Carrollton). That’s good news, because a JeT customer service representative told me that small dogs in carriers are allowed on board JeT buses.