This week on Dog Jaunt is, clearly, brought to you by Jen and Troy, who also sent a couple of paragraphs about the pet relief areas they found on their trip to California’s Shenandoah Valley wine country last summer. 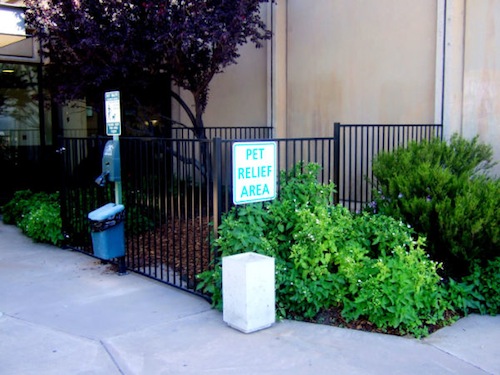 The upside is that directly across the street there is a 5 foot wide, 100 yard long stretch of grass. All you need to do is walk across the crosswalk. 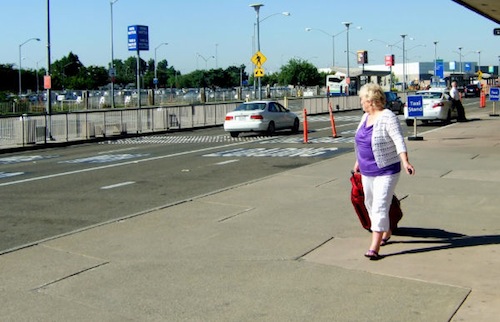 The strip of grass Jen mentioned; the view is from the Terminal B pet relief area, looking southwest across the roadway

Should you desire a larger-diameter, more park-like, and less traffic-dense patch of grass, then between the International Arrivals Building and the Administration Building is the space for you. 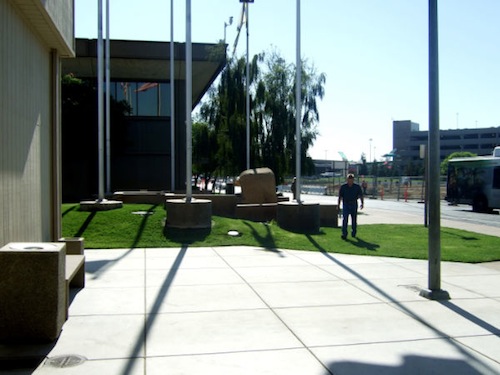 The other alternative, just after international departures and before the administration building (just past the white awning)

You do have to leave the building and return through security to access these areas, however the airport is relatively small and seems pretty efficient so as long as you are in Terminal B, or the International Terminal, going for a short walk (5 minutes) to the relief area and/or grass shouldn’t be as daunting as, say, Seattle would be.

I haven’t been to Terminal A, so I can’t speak to any grass there, but if you exit Terminal A and head northwest, you should find the grass just past the Administration Building in a few minutes.”

“I didn’t take pictures, but the Bellingham International Airport is so small that they are not really needed, even after the airport’s newly completed remodel and expansion (to accommodate more Allegiant Airlines flights and also direct flights to Hawaii on Alaskan Airlines). The airport entrances are on the east side, and baggage claim and car rentals are on the southeast end. Just beyond all of this, on the southeast side of the airport, there is a nice large expanse of grass with a garbage can and dog water bowl. It’s not labeled as a pet relief area, but it’s the obvious spot to take your dog to do their business. The grass is bordered along its length by a covered breezeway, so if it is raining you can stand undercover while your dog sniffs in the grass.

There is no need to worry about walking far to reach the grass — it’s less than a one minute walk to security and all the gates are just past security. You will need to go back through security if Bellingham isn’t your final destination, but that is usually less than a ten minute process, so most flight connections should allow time for you to go out and return.”

Jen attached a Google Maps link to her message, pointing out that if you’re in “satellite” mode, the map shows the grassy area she described: 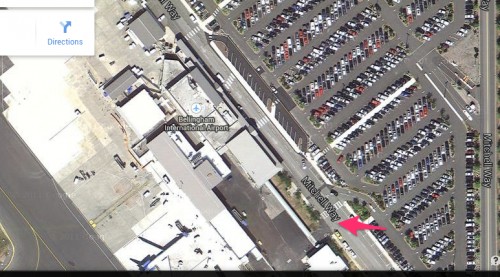 I believe she’s referring to the rectangular lawn I’ve marked with an arrow, reached by the crossing “zebra” that looks like a ladder (unlike the other zebras, its side are painted in). That’s the patch of lawn I can see that has a breezeway alongside.