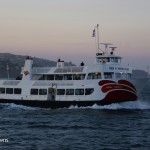 There are several companies providing ferry services across and around the Bay. I’m happy to report that all of them allow small dogs in carriers on board.

The Blue & Gold Fleet, based at Pier 39 in San Francisco, runs shoals of ferries around the Bay. Their routes include sightseeing tours to Angel Island and around the Bay, and regularly-scheduled trips to Tiburon, Sausalito, Alameda/Oakland and Vallejo (here’s a map of their routes). Their (pet) dog policy varies by route. Dogs are not allowed on the Angel Island route (which makes sense, because dogs aren’t allowed on Angel Island). “Animals in hand held carriers are allowed on Vallejo Baylink Ferry Service and Alameda Oakland Ferry Service vessels,” and leashed dogs are allowed on “Bay Cruises, Sausalito and Tiburon ferries.”

East Bay Ferries has a couple of main routes. One connects Alameda, Oakland, San Francisco’s Ferry Building, and SF’s Pier 41 (with seasonal extensions to Angel Island and AT&T Park). Small dogs in carriers are allowed on board: “Special assistance and/or animals in hand-carried containers are allowed on the Alameda/Oakland Ferry.” The second route connects Bay Farm Island (just south of Alameda Island) with SF’s Ferry Building during weekday commuter hours. A customer service representative confirmed in a phone call that small dogs in carriers are also allowed on the Bay Farm Island route.

The Red & White Fleet, based at Pier 43½ in San Francisco, operates a variety of pleasure cruises in and around the San Francisco Bay. A customer service representative told me in an e-mail that small dogs (“about the size of a Chihuaha”) in carriers are allowed on board.