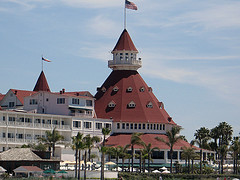 Gorgeous -- but not pet-friendly (photo by Fovea Centralis)

When my husband told me he’d be going to a conference this fall at the beautiful and historic Hotel del Coronado in Coronado, CA (just across the bay from San Diego), I rushed to the phone to make reservations. Late October in San Diego? Sign me up!

I must have called “The Del” before, because I wasn’t actually surprised to learn that the conference location is not pet-friendly. I was surprised, however, to find that no other hotel in the immediate neighborhood of the Hotel Del welcomes dogs (I called Villa Capri-by-the-Sea, La Avenida, Glorietta Bay Inn, Coronado Beach Resort, El Cordova, and the 1906 Lodge).

It turns out that there are four dog-friendly hotels on Coronado Island. At one end of the room-rate scale is the Loews Coronado Bay, which looks splendid (and recently appeared on two lists of the top pet-friendly hotels in the U.S.), but is located well down the Strand. More affordable options are The Coronado Inn; its sister hotel, The Coronado Island Inn; and The Crown City Inn & Bistro. These properties, though, are all located in Coronado’s business district, so they too are inconveniently far from the Hotel Del Coronado.

I’ll be sitting this one out, it appears. How vexing!