I’m losing patience with Alaska Airlines, so I’ll say up front that this is the airline’s policy as of today’s date; given their track record, check their page about pet travel carefully. Heaven only knows what their policy will be when you’re making your plans.

Back on November 4, I reported that Alaska Airlines had started requiring health certificates for in-cabin pets and expressed a fervent hope that the other major U.S. airlines would not follow suit. Two weeks later, I reported (with relief) that Alaska had reversed itself, and once again only required health certificates for pets traveling in the belly of the plane. That, I thought, was that — but on December 31st I got word that Alaska’s pet travel page had changed yet again, and now looks like this: 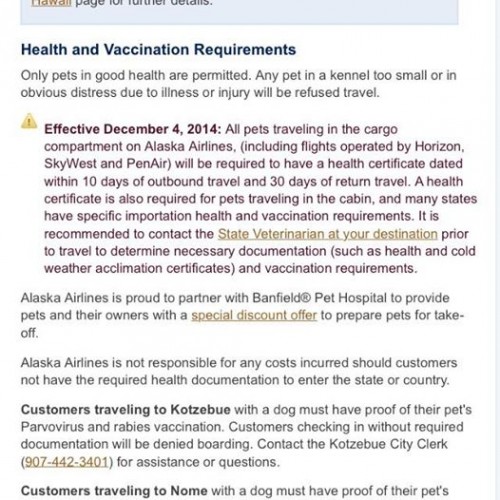 In relevant part, the page now says “A health certificate is also required for pets traveling in the cabin, and many states have specific importation health and vaccination requirements. It is recommended to contact the State Veterinarian at your destination prior to travel to determine necessary documentation (such as health and cold weather acclimation certificates) and vaccination requirements.”

That’s bad news, for all the reasons I laid out in my first post and on Dog Jaunt’s Facebook page.  Please also note that the policy is “Effective December 4,” which is a little rough on the folks who were making plans between November 21 (when Alaska dropped the policy) and December 31 (when they reinstated it).

I don’t know if and when Alaska will change its mind and steer itself back into line with the other major U.S. airlines (except Hawaiian, which, given the islands’ concerns about remaining rabies-free, is a special case). I am amending Dog Jaunt’s chart about health certificates and U.S. airlines to indicate that Alaska’s policy is up in the air and should be checked and double-checked as you make your plans.

For those of you wondering what the heck a domestic U.S. health certificate is, here’s a blog post showing you what it looks like, and how it’s different from other bits of pet travel documentation.