On November 4, I reported that Alaska Airlines had started requiring health certificates for in-cabin pets and expressed a fervent hope that the other major U.S. airlines would not follow suit. Imagine my surprise to learn today that Alaska has reversed itself, and returned to its previous hands-off policy (“A health certificate will not be required for pets traveling in the cabin, however, many states have specific importation health and vaccination requirements”). You can see in my November 4 post what the relevant portion of Alaska Air’s pet travel page looked like at that point, and here’s what it looks like now: 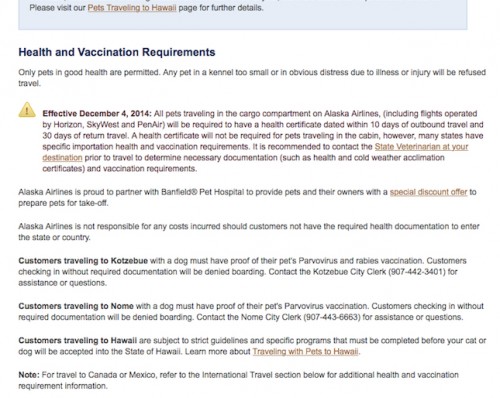 I don’t know why Alaska has done this Forward/Backward Dance (one reader suggested that the original policy shift was prompted by fears that pets might transmit Ebola, and the timing is certainly suggestive), but I’m grateful that Alaska has returned to the baseline occupied by all of the other major U.S. airlines except Hawaiian.