This was the last long walk we took before we left Paris last fall, and it was a perfect way to say good-bye to the city. The Île aux Cygnes (“Isle of the Swans” — nope, we didn’t see a single one) is a long, thin island in the Seine. Just southwest of the Eiffel Tower, it’s a little bit off the beaten path, but not so much so that it’s tough to get to. It was created in the early 19th c. as a breakwater, to protect what was then the port of Grenelle (now absorbed into Paris and part of the 15th arrondissement). Sixty-two years later, the American community in Paris commemorated the centennial of the French Revolution with a 1/4-size replica of the Statue of Liberty, which was installed on the southwest tip of the island (at 22 metres, or 72 feet, tall, it’s still pretty imposing). 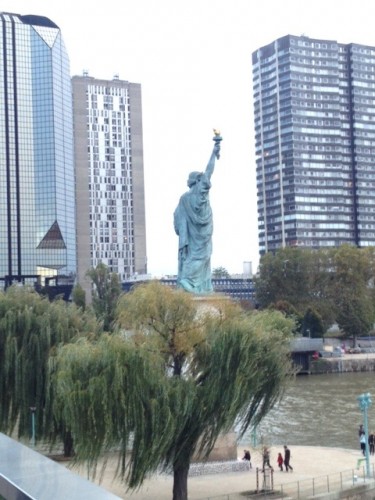 Paris’s biggest Statue of Liberty replica (there are two others in town, plus a full-size replica of the flame), from the Pont de Grenelle.

Between the Statuette of Liberty at one end, and the Pont de Bir-Hakeim at the other, there’s a single path, perfect for promenades, flanked with trees and benches.

I recommend starting on the Pont de Grenelle. If you, like us, take the #72 bus along the Right Bank to get there, listen carefully for the “Radio France-Pont de Grenelle” stop (confusingly, one stop west of the “Radio France” stop). You will find yourself standing where the Rue de Boulainvilliers meets the Avenue du Président Kennedy. Cross the street to the river and get yourself onto the left side of the bridge. Descend the ramp and walk under the bridge to reach Madame Liberté. Please note that she’s facing her American sister, 3,500 miles away — and savor the fact that you can get close enough to touch her pedestal (pet dogs, as you may already know, cannot visit Lady Liberty).

Turn back around and stroll northeast, the length of the island. The views are wonderful, as you can see, and the folks you meet are all in strolling mode — relaxed, prepared to admire your dog, and often accompanied by dogs themselves. 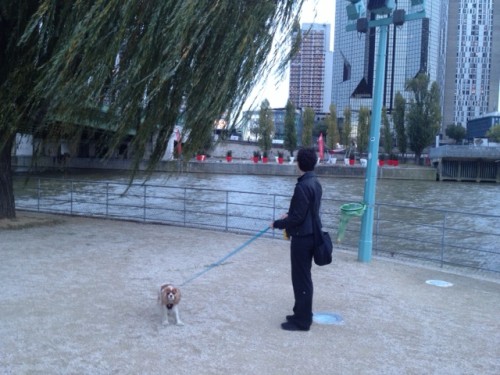 Chloe and me, just below the statue — beyond us is the Left Bank, and the waterfront part of the the quartier of Grenelle 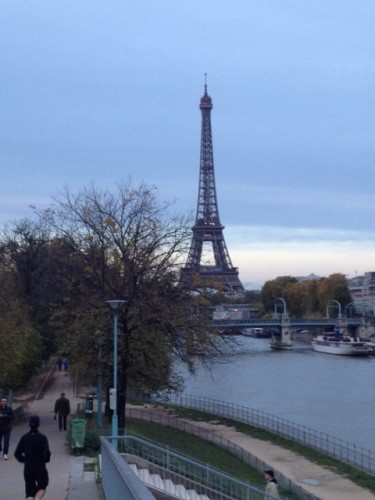 We’ve crossed back under the Pont de Grenelle, and now we’re walking north — the views of the Eiffel Tower just get better and better 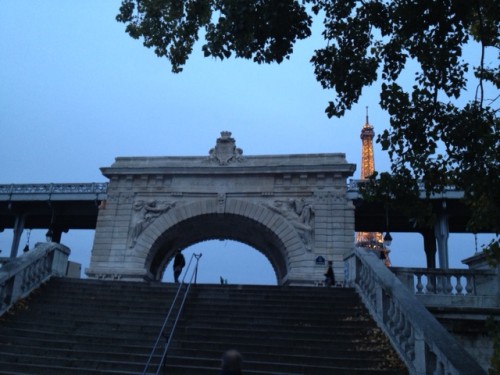 The stairs at the northeast end of the island, leading up to the Pont de Bir-Hakeim 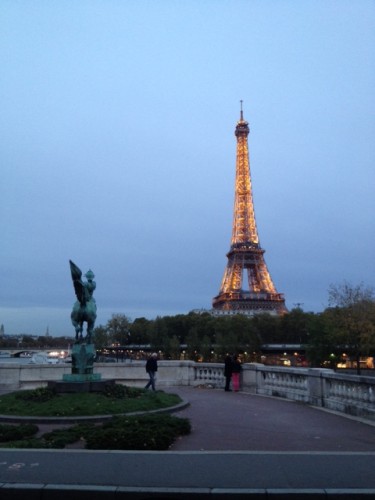 Pass under the arch in that last photo, carefully crossing the bridge, and you’ll find this little plaza before you (the statue is called “La France renaissante”) 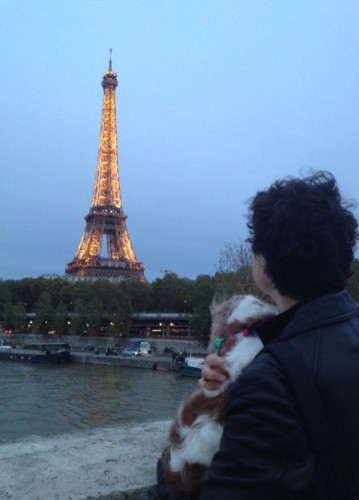 I wish I could tell you that we’d timed our walk to see the tower at its best, but it was purely a matter of luck. We stayed at our bit of parapet until dusk turned into evening, and the city lights were spangling the river.

When you’re ready to leave, return to the right bank. Cross over to the center of the bridge as you get to its north end, and descend the staircase before you; you’ll find yourself right at the “Pont de Bir-Hakeim” stop for the #72 bus, now heading back to the Place de la Concorde (and beyond, to the Louvre and Châtelet). 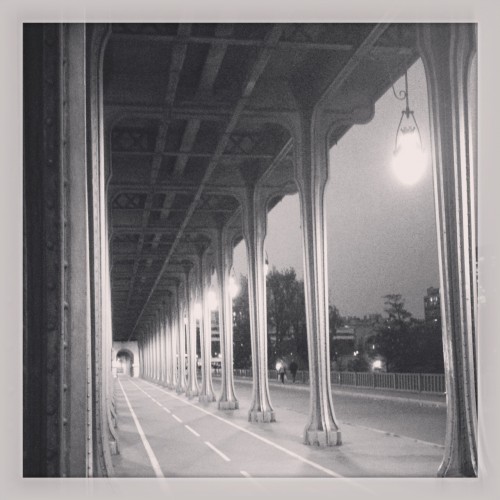 Heading north on the Pont de Bir-Hakeim. You may remember this gorgeous bridge from the movie “Inception,” and before that from “Last Tango in Paris.”