Before New York’s High Line, there was Paris’s Promenade Plantée (also known as the “Coulée Verte”). This elevated park, built on an abandoned railway viaduct, runs from just behind the Place de la Bastille to the Bois de Vincennes, nearly 3 miles away. The main thing to notice is that it’s elevated, so there’s no street traffic to dodge, or even think about — and the views, down streets and into the courtyards of neighboring buildings, are unusual and interesting. The promenade is narrow — really just a wide, paved path lined with plants and arbors and benches — and like its NYC counterpart, it runs between, and sometimes through, buildings in its path. It’s a beautiful, calm breathing space in the middle of a very busy city, and I can’t recommend it enough. 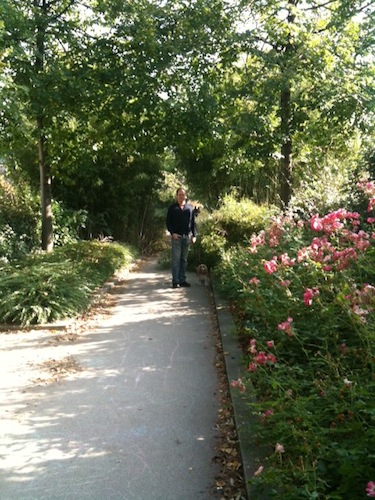 Walter and Chloe, at a distance

Now that I’m doing the research for this post, I know that the Viaduc des Arts continues for several blocks (you can’t tell where it is when you’re above it), and now I understand all the no-dogs signs we saw during the first part of our walk. Next time, we will find a way up to the promenade at the corner of the Avenue Daumesnil and the Rue de Rambouillet, and we’ll head southeast from there.