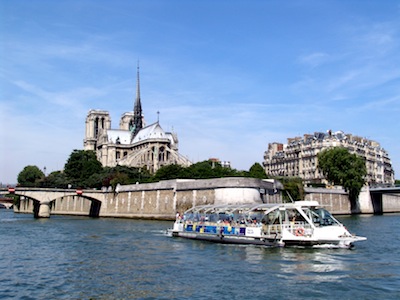 Just over a month ago, I wrote a post about the things we plan to do with Chloe in Paris when we take her there this fall, and I mentioned that a classic first trip to Paris includes a trip on a “bateau-mouche,” one of the river boats that let you view the city from the Seine. I breezily included a river boat ride in the list of things you could easily do with a dog, but if you’re going to make plans, you’ll need a few more facts.

I wrote to the five best-known river boat tour companies, and here’s what I learned:

Compagnie des Bateaux-Mouches — The actual owner of the trademark “bateaux-mouches,” this company’s tours depart from the Right Bank, on the Port des Champs-Elysées, between the Pont de l’Alma and the Pont des Invalides. Dogs are allowed on the sightseeing cruises, but not on the lunch or dinner cruises.

Bateaux Parisiens — This company’s tours depart from the foot of the Eiffel Tower. They do not allow dogs on board.

Vedettes de Paris — This company’s tours depart from the Left Bank, at the foot of the Eiffel Tower, on the Port de Suffren between the Pont d’Iéna and the Pont de Bir-Hakeim. Dogs are allowed on the sightseeing cruises; I failed to ask whether they are allowed on the culinary cruises, but hope to when we are in Paris next month.

Vedettes du Pont-Neuf — As the name suggests, this company’s tours depart from the Pont-Neuf — more specifically, from the Square du Vert Galant at the west end of the Ile de la Cité. Dogs are allowed on board.

BatoBus — This is the river equivalent of the hop-on-hop-off buses you see circulating around Paris. You purchase a pass for a period of time (1-day, 2-day, 5-day, or 1-year) and ride as often as you like. There are eight stops, all useful (Tour Eiffel, St.-Germain-des-Prés, Jardin des Plantes, the Louvre, the Musée d’Orsay, Notre-Dame, the Hôtel de Ville, and the Champs-Elysées), and the boats run in a loop. Dogs are allowed on board — I inquired about small dogs in carriers, but you might have success with a larger dog, especially if you have a muzzle on hand.

It would be a shame not to put all this research to use, so I’ll make a point of taking Chloe onto the river. If you and your pup take a bateau-mouche ride, send me a picture and let me know if you had fun!