Last July, I wrote a post praising PetEgo’s Pet Tube, the car safety solution we’d newly adopted for Chloe. We still use it, and I like it just as much as ever — slightly more so, in fact, now that I’ve learned how to install it properly.

Yes, that break-through discovery (“In an accident, if the hanging straps were cinched short enough, the Pet Tube would swing up and forward without hitting the passenger seat in front of Chloe”) was all wrong. I have reader Terri to thank for setting me straight. As you’ll see in a comment on that post, she sent me a link to a video review of the Pet Tube by DorsetDog.com — and in it, at the 1:30 mark, Dorset Dog shows you how it’s done.

Instead of shortening the straps and looping them over your car seat’s headrest, you lengthen them and pass them around the back of your car’s passenger seat. In my defense, I direct your attention to this very misleading photo by PetEgo, and I’d also like to point out that the accompanying video is heavy on the sensual caressing of the Pet Tube and light — very light indeed — on details about how to install it. 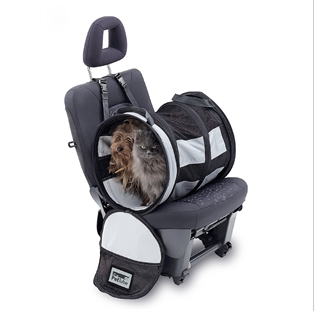 But never mind. Live and learn! Onwards, and also upwards! Our focus is now on correct installation of the Pet Tube, and you’ll need to release the car seat’s lock and tilt the seat forward to do that — and be sure to secure the strap that’s closer to the center of the car first, before securing the strap closer to the door.

It’s an awkward business — keep part of your mind on your nose, ears, and glasses frames while you’re poking the head of the strap through the seat crease, and pulling one end of the strap up to meet the clasp on its other end — but after a brief wrestle, the straps will be in place, one on each side of the head rest and neither interfering with your car seat’s locking mechanism: 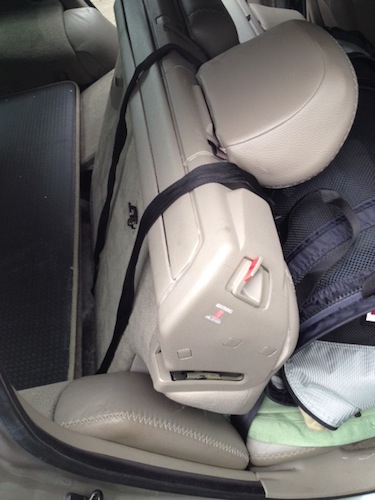 View of the back of the seat, still tilted forward, with the straps secured around it but not yet cinched tight 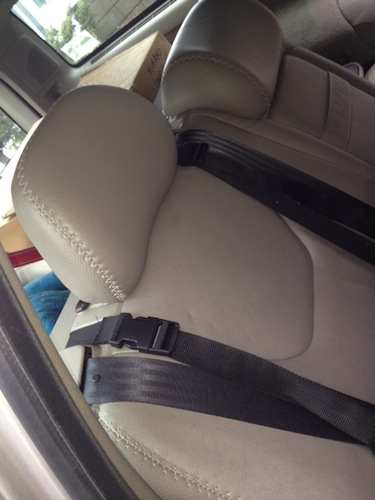 Seat locked back into place, straps cinched up snugly 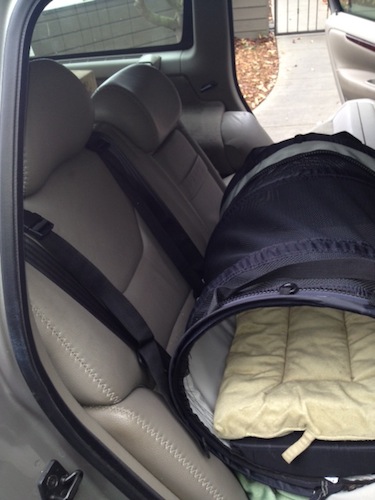 Same view, but a from a step back, so you can see the tube part

My Dorset Dog colleague secured his straps entirely in the back, closing the clips and the extra strap pieces in the rear of his vehicle, and it would look tidier like that — but I like having the clips accessible. It’s nice to be able to give the straps a tightening tug when they need it, without having to unlock the seat (both seats, in fact, since in my car you have to unlock the driver’s-side back seat before you can unlock the passenger’s-side back seat). If you rotate the clips to a lower position than they’re shown in that last photo, the extra strap length tucks nicely out of sight behind the tube.

Proof that this actually is the right way to install the Pet Tube is in this last photo, showing Chloe’s side “windows” nicely horizontal: 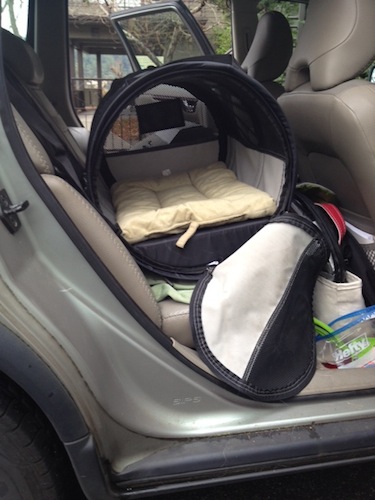 Also, both of the Velcro strips on the wall of the tube can now be used to stabilize the Comfort Pillow — oh yes, the evidence is there

As I mentioned in my update to the post I wrote last year, we used the Pet Tube for more than six months wrongly installed, and were quite content with it. I don’t believe it’s unsafe used that way, and it certainly is easier to move from one car to another if the straps are merely hooked over the headrest. On the other hand, secured around the seat back, the Pet Tube doesn’t budge — and it can be installed even in cars without headrests.

My thanks again to Terri for the gentle nudge towards accuracy — how grateful I am to Dog Jaunt’s readers!