As you may know from earlier posts, we have a Snoozer car booster seat for Chloe (specifically, the Snoozer medium Lookout, without the optional drawer). It works perfectly for us and for Chloe, but a couple of readers have written to me and mentioned that their dog has learned to hop over the side of the Snoozer onto the car seat (the Snoozer harness strap loops through the same seat belt strap that holds the back of the Snoozer to the back of the car seat, so a motivated dog can drag her harness attachment along the seat belt past the corner of the booster seat). That’s not tragic, because their dog is still strapped in safely, but it’s annoying. I was happy, therefore, to be nudged by reader Jen, who wrote to me and asked what I thought of the Bowsers car booster seat for dogs.

Frankly, I hadn’t given it a thought, but a wonderful Seattle pet store called Fido & Scratch (a bit off the beaten track, in the Mt. Baker neighborhood, but well worth the trip) had one in stock for me to inspect. In person, the booster seat is just as attractive as it looks on the company’s website. It’s the same size as our Snoozer, and holds a dog at window height, but it’s more refined-looking — it’s covered in pretty, micro-fiber material, and it’s secured by discreet straps rather than the car’s seatbelt. 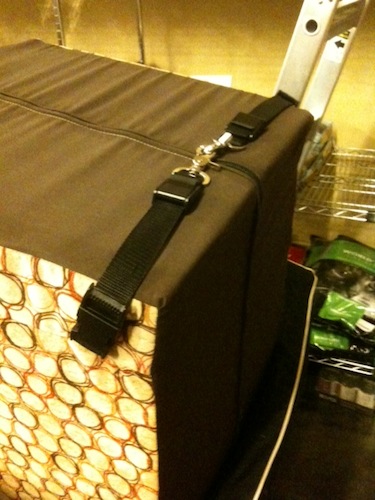 To me, however, the straps seem too low-keyed. They are attached at the lower, back corners of the structure, and they end in two toggle clasps. If you’re installing the booster seat in a car seat that has a back (like the back seat of a mini-van — you’d never put your dog in the front seat, right?), you stretch the two straps from front to back and clasp them together. If you’re instead dealing with a seat whose back is part of the car, like the back seat of a sedan, you’re supposed to clip the toggle clasps onto the latch bars you’ll find near the doors and next to the seat belt buckles (they’re mainly meant to secure baby seats). I’m just not convinced that those little toggle clasps would hold up in an accident. I prefer our Snoozer, homely as it is, because the booster seat is held to the car by the car’s seat belt. And that leads me to…

Fido & Scratch had another car booster seat I hadn’t seen before, from the L.A. Dog Company. It wasn’t nearly as pretty as the Bowsers car seat — it’s covered in a simple cotton/poly twill fabric — but I really like its design. I may, in fact, like it better than our Snoozer. It’s secured to the car by the lap part of one of the back seat belts, which passes around the belly of the booster seat, in a channel that keeps the belt from slipping. That’s solid — arguably more solid than our Snoozer’s system.

The L.A. Dog Company seat also solves the problem I mentioned at the beginning of this post. On our Snoozer, you fasten the harness attachment around the lap portion of the back seat belt, and your dog is discouraged (or not) from jumping overboard by the pressure of the seat belt against the booster seat. On the Bowsers car seat, you fasten your dog’s harness attachment around the nearby seatbelt. It’s secure, but there’s really nothing stopping your dog from hopping out of the car seat. The L.A. Dog Company seat, by contrast, includes a small loop through its back, and you attach your dog’s car harness to that loop.

The black loop is nearly invisible against the charcoal fabric, but if you can make it out, you’ll see that it’s small enough to keep your dog’s harness anchored in the middle of the booster seat, preventing her from hopping down onto the car’s back seat

My thanks, as always, to Dog Jaunt’s readers, who keep me on my toes. In the process of looking at these two car booster seats, by the way, I noticed a new, collapsible car booster seat from Sherpa. I haven’t yet found a Sherpa product I’ve liked, but I’ve ordered this one, and I’ll let you know what I think of it when it arrives.