As I mentioned in a post last July, I replaced Chloe’s first car safety solution (a combination of the medium-sized Snoozer Lookout car booster seat and a harness-and-belt that she wore while in it) with the Pet Tube from PetEgo, about 24 hours after I watched a series of videos filmed by the Center for Pet Safety, showing what happens to a crash-test dummy of a Boxer wearing a number of safety harnesses/tethers (makers unidentified) in a 50 mph crash.

We’ve been very happy with the Pet Tube, and it works well, too, as a travel solution, since it can be collapsed into a fairly compact pancake and packed in a suitcase. However, it’s still bulkier than the harness-and-belt that we originally used on road trips away from home, and I missed having that minimal alternative — especially on trips where I didn’t know if there would be car travel at the other end, and wanted to pack a just-in-case safety solution.

Enter Sleepypod, maker of the Sleepypod Air pet carrier, the Yummy food/water bowl set, and other good-quality pet travel products: They announced that they were releasing a new dog car harness that would protect pets “in the same frontal crashes that ensure the effectiveness of child safety restraints, the Federal Motor Vehicle Safety Standard No. 213” (which turn out to be at 30 mph). As soon as the Clickit harness was available, I ordered one, and now I’ve had a chance to try it out on Chloe. Please note that I paid full price for my Clickit harness; I will always let you know when someone else has paid for, or given me a favorable price on, a product I review.

The long version follows below; the short version is that the Clickit harness works well in the car, but did not work at all as a walking harness. I loved the sturdy construction of all three pieces, and as you can see in this photo, Chloe was unfazed by their weight and by how thoroughly they attached her to the car. I’ll keep using the PetTube, mainly, since it’s easier to get her into and out of, but I’ll keep a Clickit harness set in my husband’s car, and I’ll pack one on those trips when we might travel in a car (or when I know we’ll travel in a car and my packing space is limited). 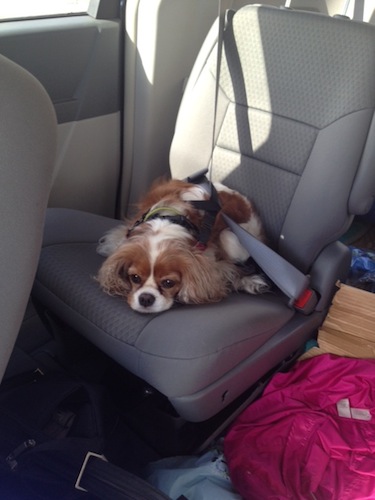 Shortly after this photo was taken, she fell asleep

I was initially daunted by the size and weight of the harness. I ordered the Extra Small size for Chloe, after measuring her as directed by Sleepypod on the Clickit page (tape measure looped around her neck and chest in a figure-8), and the assemblage I received (harness and two side straps) weighs 1 lb. 4 oz. Each piece is solidly constructed of quality materials, and I wondered whether it would all be too much for a 13-lb. dog. It was no walk in the park, either, to adjust the harness to fit or to shorten the side straps. Happily, Sleepypod has posted a video that helps, particularly with the harness fitting (the separate side straps are another matter — I ended up just fiddling with them until they were shorter).

Where the video left me uneasy, though, was in its use of a plush-toy German Shepherd as the model — for one thing, Chloe has long hair, and I worried that it would be caught and pulled, especially by the seat belt, as it passes through the two back straps. Also, that plush-toy GSD is a very tranquil creature indeed, while Chloe is a girl who likes to participate in what’s happening to her — how would it all work with a real dog?

Two things to mention: I misspeak in the video when I am telling you about attaching the side straps to the sides of Chloe’s harness. Instead of facing “upwards,” the hooks should in fact face “downwards,” so the active part is away from your dog’s fur. I actually got it right on her right side, as you can (barely) see in this photo: 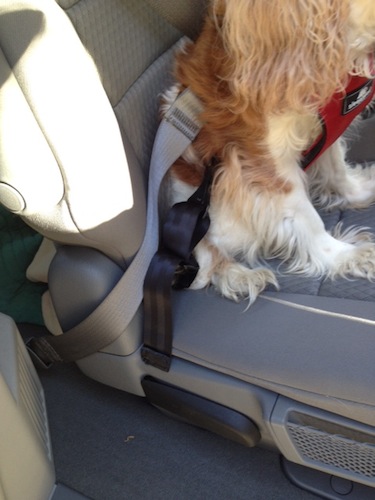 Clip facing away from Chloe’s side

Also, Sleepypod wisely includes a card that covers the main points of harness fitting and installation, and I suggest that you keep it with your harness kit for quick reference, especially when you’re out of YouTube range. It and the harness pieces will fit nicely in a gallon-sized Ziploc bag.

You’ve already seen a photo of the happy ending: Chloe absolutely did not mind all the gear (despite that  yawn halfway through the video), nor did she mind the seat belt through the back of her harness. As I’ve said, I approve heartily of the pieces’ construction (the padding on the chest part of the harness will bring a tear to your eye, and the straps have the same massive metal clips and seat-belt-like construction that delighted me in our old PetBuckle strap). 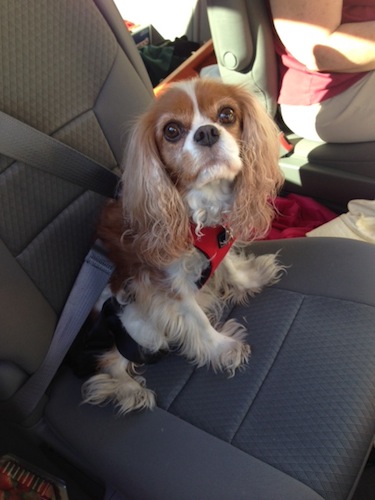 The part that did not work for us was using the harness as a walking harness. The idea is an appealing one — for short jaunts especially, why bother taking the harness off your pup? Why not just clip a leash onto it and go?

Two reasons, it turns out. The first is that the leash clip is on the collar part of the harness, so you’re restraining your dog by her neck. I choose not to do that with Chloe; since Cavaliers as a breed are prone to syringomyelia, a dreadful ailment, I do everything I can to take pressure off her neck. Second, if you leave the back straps long enough to allow the seat belt to pass through them, the harness dangles away from your dog’s chest when she walks around in it — to the point, for Chloe, that one or the other front leg worked out of it within just a few steps, and she was prevented from walking comfortably: 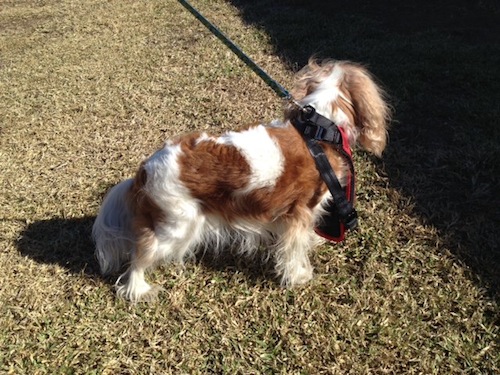 Right leg all the way out of the harness, and you can see in this picture, too, how the leash attaches at the collar

A Sleepypod rep may be reading this and shaking his/her head, thinking that I left the harness’s back straps too long, but I swear I didn’t. As you can see in the video, the seat belt just passed through them, and I verified that there wasn’t extra slack. In any event, not being able to use the harness for walking is by no means a deal-breaker: It’s a pity not to take advantage of the clever Velcro strap Sleepypod includes to silence the parts that would otherwise clank together during a walk, but it isn’t hard to remove your pup from the harness.

One last source of concern are those latch bars. My in-laws’ van has two of them per seat, and they’re nicely visible (which is why their car appears in the video). My own car has two of them per seat, but you have to dig around in the seat crease to find them — like you did in the old days to find seat belt bits. Older cars, however, may lack latch bars (and some cars that aren’t so old, too, like my mother-in-law’s Lincoln sedan). If your car doesn’t have them, Sleepypod suggests that you consider having them installed, and provides a link with info about how that can be done.

The Clickit harness has been tested for dogs up to 75 lbs. How small can a dog be and wear one? I believe that Chloe is about as small as you can go, given that I cinched the collar as tightly as it would go before it fit her. Sleepypod has a picture of a Dachshund wearing the Clickit, which makes sense to me — Dachshunds have shorter legs than Chloe, but their neck circumferences are comparable. Chloe’s neck is just over 10″ in circumference; if your pup has a thinner neck, the Clickit is probably not for you (for smaller dogs, Sleepypod suggests one of its carriers).