A quick recap for those of you who are just arriving at Dog Jaunt: I added a week to our month-long trip to Paris because I wanted to have the experience of taking Chloe into, and out of, England via the Eurotunnel Le Shuttle.

Why make the effort? You are not allowed to fly into the U.K. with an in-cabin pet, so people who prefer to travel within arm’s reach of their dog have to be creative: One of the options, as I mentioned in this post, is to rent a car and drive it (and you, your pup and who/whatever else is in the car) onto a Eurotunnel Le Shuttle train. How can I recommend it to you unless I try it myself?

Short story: It all worked like a charm, and was surprisingly pleasant as well as easy. There are some (low) hurdles to jump over, so timing is an issue, and there are some costs to consider and budget for.

Traveling from France to England

Before you drive up to the embarkation plaza in Calais, you need to have in hand not only your own passport but also your dog’s “passport.” In theory, and no doubt in practice too, the same paperwork that you obtained to bring your pup into France will also work to bring her into the U.K. Per DEFRA: “For non-commercial movements, the Annex 1 or Annex 2 certificate is valid for entry into the EU for 10 days from the date of issue and remains valid for a total of four months from the date of issue for further intra-Community travel.” We decided, however — for the sake of having the experience, and because we thought it might save time if the border folks were handed a familiar document — to get Chloe an E.U. pet passport. I’ll write about that in a separate post, and the fact is, having a “pet passport” really doesn’t mean much for a dog from a non-E.U. country. It’s essentially the same information that was in her health certificate, copied into a blue booklet and backed up by an examination from a French veterinarian.

He not only verified that Chloe was in good health, he also provided the second thing you’ll need before arriving in Calais: The tapeworm treatment that the U.K. requires, and a note (in our case, in her passport) stating that she received it in the specified time frame (“Not less than 24 hours and not more than 120 hours (1 to 5 days) before [her] scheduled arrival time in the UK”). There are a couple of tapeworm treatment options; Chloe got a pill. Before you leave your vet’s office, make sure that s/he writes down the time that the treatment was administered, not just the date (and in European, 24-hour time, i.e., 13:40 rather than 1:40 pm — your vet will be European, so it’ll happen, but double-check it to make sure).

Here’s a link to Eurotunnel Le Shuttle’s useful summary of what’s required to get on the shuttle in Calais (it’s essentially the same as what I’ve described, but it calls out the microchipping requirement separately — you’ve already dealt appropriately with your pet’s microchip, however, in the process of getting her health certificate).

You will need a car (please note that some car rental agencies won’t rent a car one-way into the U.K., and the ones that do add a truly remarkable surcharge — which explains why we decided to return to France to fly home), and you’ll be happier with a reservation on the Eurotunnel Le Shuttle, though when we were traveling (mid-week at the beginning of November) there was plenty of room on earlier/later shuttles. I could not use my U.S. credit card to make an on-line reservation, and succeeded in getting a reservation only by getting my credit card company rep on the line and calling Eurotunnel Le Shuttle with him. A further twist? I could not call the U.K. number for the shuttle from the U.S.; happily, I could call the French number, and the shuttle’s reps speak English no matter what country they’re located in.

So there you are, in your rented or borrowed car, with your reservation, dog, and paperwork in hand. You drive through Picardy, and history, and you arrive in Calais. The very first thing you must do (after taking Exit 42 off the A16 motorway) is look for the signs for the Pet Control Point, because you have to get your pet and her paperwork checked before you proceed towards the gigantic tollbooth. We arrived on a grimly rainy day, and were in a desperate hurry; please forgive the pictures. 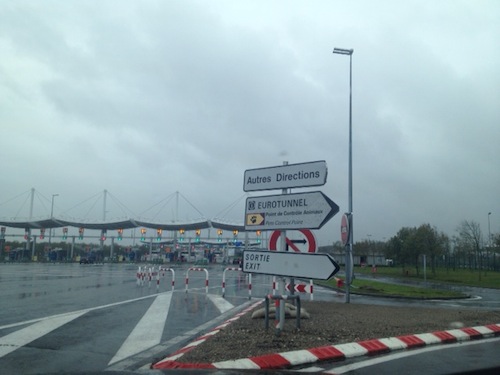 Ignore, for a moment, the big tollbooth structure that dominates the scene and beckons you forward. Instead, follow the (criminally small) yellow paw print sign, pointing you to the right. 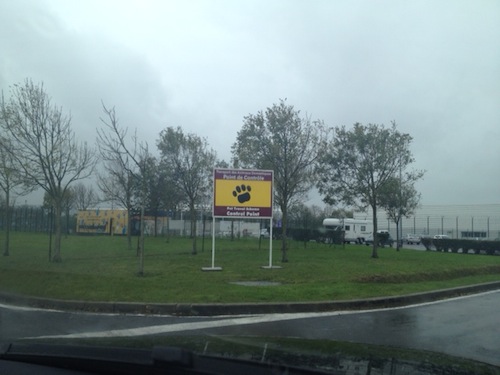 As you turn to the right, you’re given a much larger yellow paw print sign. The control point is in that low building behind it. Drive into the parking lot, and bring your pup and her paperwork inside.

A panorama of the Pet Control Point building and the fenced dog-walking area next to it. 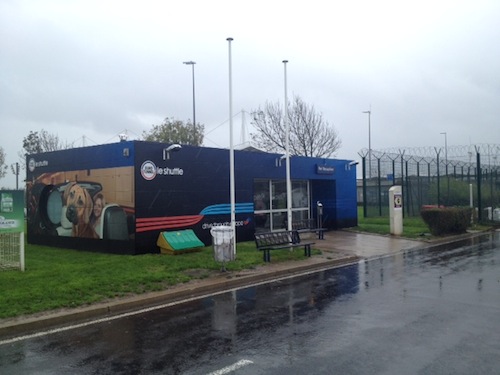 The Pet Control Point building, as it looks on a rainy day in early November, approached at a high rate of speed.

Inside, we plopped Chloe’s carrier on the counter and invited her to poke out her head, so that the control officer could run a wand over the back of her neck to read her microchip. She looked through Chloe’s passport (I had Chloe’s U.S. paperwork in hand, as a back-up, but it wasn’t needed) and gave us a tag to stick to our windshield. 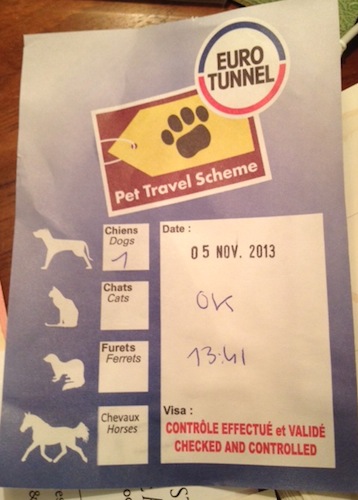 The first tag we received in Calais

We exited the pet control area and turned right towards that tollbooth structure you saw in the first photo. Machines offered us the chance to buy a ticket or claim our reserved ticket; we did the latter and were given another tag, this one designed to hang on our rear-view mirror. If we had arrived early, we could, at this point, have sauntered into the terminal for snacks and magazines and a bathroom break. As it was, we hurried onwards to a booth containing a French customs officer, who waved us on to what turned out to be the U.K. border, right there in Calais. 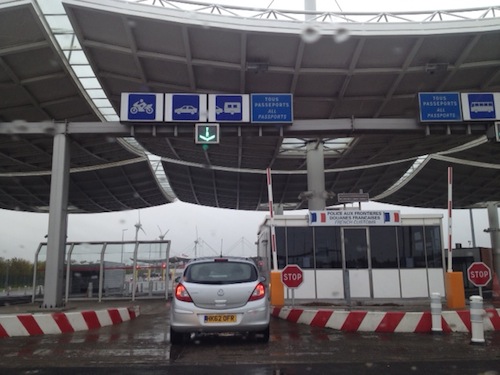 French customs, completely uninterested in our passports or our tags 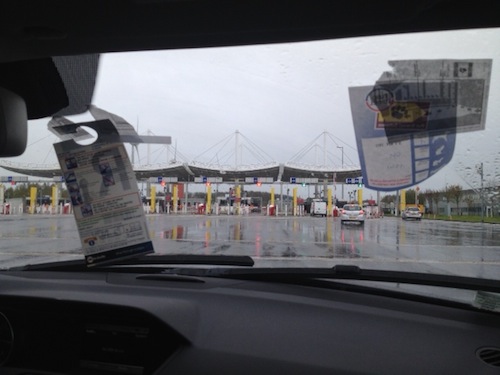 Approaching the U.K. border (by this time, we’d stuck both tags to the window, using bits of adhesive torn from the pet tag; the car looked like Ma and Pa Clampett moving to Bever-lee)

We assured the U.K. officer that we’d be returning tout de suite to France, and had reservations on a flight back to the U.S. He looked over what he could see of us past all the stickers, decided we were harmless, and stamped our passports. We finally caught up to our fellow passengers, joining the line of cars boarding the train. Train waiting at the bottom of the ramp Following our fellow passengers onto the train. Cars are parked on two levels; we were on the lower level going to England, and on the upper level on the way back. They look exactly the same; the only difference is the extra gut wrench of driving onto a train and then immediately up a ramp, in an unfamiliar car. 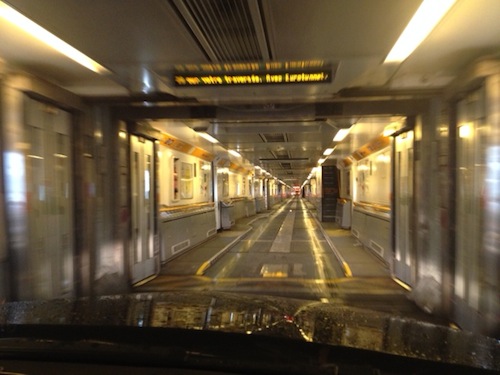 Driving forward inside the train

Once you’re parked, thick barriers swing closed between the train carriages. You turn off your car, put on the hand brake, and open your windows halfway (to keep the pressure changes from being bothersome). You and your car mates can doze, or watch movies on your portable electronic devices, or snack, or read. You cannot take flash photos (it distresses the equipment keeping an eye out for fire), and there is no wi-fi. There are modest but workable bathrooms, every 2-3 carriages apart, and you can walk to them. There is no café car, and no other attraction that would tempt you to walk elsewhere on the train. 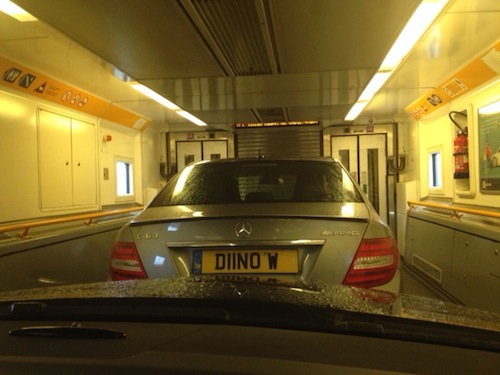 Parked on the train. The barriers have been deployed; doors on each side let shuttle employees and passengers move between carriages. A bathroom, shoe-horned into the side of a carriage 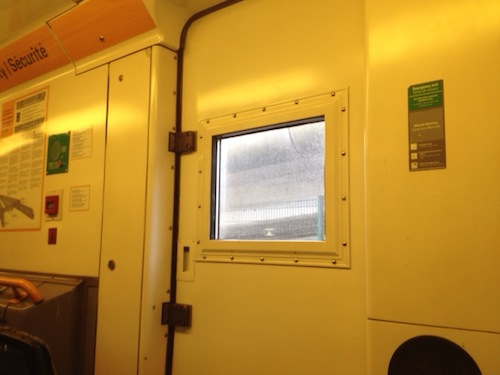 There are windows in every carriage — they’re irrelevant for most of the journey, but it was nice to see light through them and know we’d arrived, even before the announcement

The train began to move, and 35 minutes later we were in Folkestone. So quick, compared to the Hovercraft and ferry rides I’ve taken in the past. And what could be more comfortable than this? 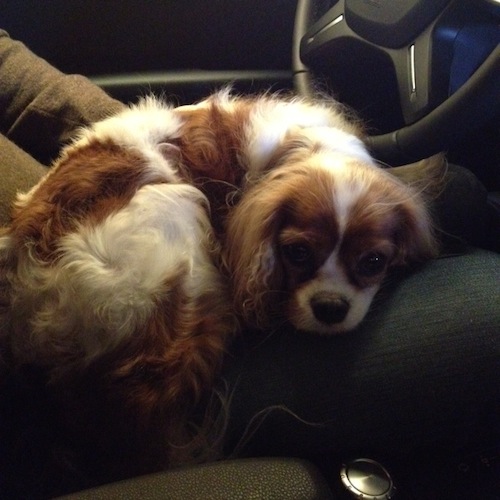 Once you reach Folkestone, you hear an announcement warning you to drive on the left side of the road, and to set your clocks back an hour. The doors swing open, and you drive off the train and onto the M20 (dear God, on the left).

Traveling from England to France

Returning to France on the Eurotunnel Le Shuttle was even easier. We were rattled, initially, by not seeing any kind of sign for pet control. We collected our hanging tag, and went in search of The Authorities. 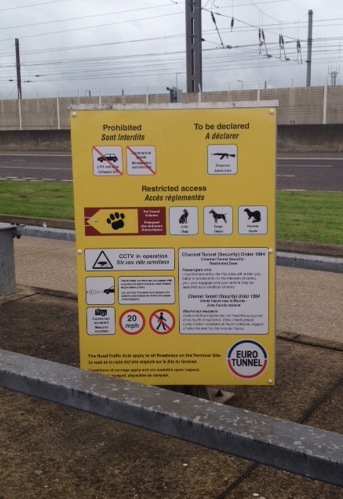 This sign in particular, located near the Folkestone entrance, threw us for a loop. It was yellow! There was a paw, and an arrow! And yet, there was no Pet Control Point….

There is a large and pleasant dog-walking area, equipped with agility structures, a water fountain, and benches, but it’s purely a convenience. There was no building next to it, and no signs indicating that pet owners should do anything except pick up their dog’s poop. Baffled, we inquired inside the terminal, repeatedly, and the (very patient) lady at the information desk repeatedly told us there was no Pet Control Point in Folkestone. Surely this must be part of a Pet Control Point Complex, we thought, but no — it’s just for walkies

A panorama shot of the whole walkies area The interior of the walkies area, with Chloe and my handsome husband (please note the beret) Visual proof that there’s a water fountain — how unexpected!

We finally stopped fretting, bought snacks, and ambled onto the train when our boarding letter was called. We passed booths and officials similar to those we’d met four days earlier, but the whole process was so low-key that I cannot remember any details. Another half hour passed, and another announcement reminded us to change our clocks and drive on the side of the road the locals favor, and we were back in… About those expenses I mentioned: It cost about 50 € to get Chloe’s pet passport (an optional expense); another 50 € to get her tapeworm treatment (not optional); and 15 £ each way to add her to our Eurotunnel Le Shuttle trip (bringing the total shuttle cost to about 70 £ each way). Why was I charged in pounds rather than euros? The shuttle rep offered me the choice in our phone call, and then chose pounds for me since it was a better rate that day.