I learn so much from Dog Jaunt’s readers. A case in point: Reader Maria sent me a note last fall, telling me that she had just moved to Doha, Qatar from Colorado with Farrah, her 2.5 year-old Chihuahua, and would I like to hear how it went? I enthusiastically assured her I would, and here’s what she told me.

Maria and Farrah flew on United from Denver to Dulles, from Dulles to Dubai, and then on to Doha. “I had a lot of difficulty booking her onto my reservation myself and eventually had to rely on a travel agent to make sure everything was properly arranged. Flying on United, all I had to do was pay the $125 fee (each way) and Farrah was set to come in-cabin with me. I had previously arranged for an import permit for her (the state of Qatar doesn’t require quarantine, just a certificate of good health an an ‘import permit’, I got mine through Doha Vets http://dohavets.com/).”

During the plane flights

Farrah was an unhappy traveler on their first leg, from Denver to Dulles. She was calm in Maria’s lap, but the flight attendants required that Farrah return to her carrier (it is the rule, and it likely does prevent pet hair and dander from disturbing allergic passengers). “[P]oor Farrah whined and cried the whole way from Denver to DC,” so on their next, long leg, Maria chose “to give her a sedative (my vet gave me two) so that she (and I) could get a little bit of rest. Within an hour she was dopey, but still detested being kept under the seat.”

They both appreciated the air-side pet relief area at Dulles (and indeed, it is a sight for sore eyes): “I was overjoyed to discover the AMAZING pet relief area in the Dulles terminal, and while Farrah was not too thrilled about the soggy fake-grass, she still managed to empty out for the long-haul international flight to Doha (with a stopover in Dubai).”

That helped with the next flight, which was very long indeed: “She was able to control her bladder reasonably well, and only needed to pee once in the middle of the 13 hour flight. I took her into the lavatory where she was so desperate to go she just let loose in the middle of the floor. I cleaned it all up nicely, and she was set to pass out for a few more hours until we landed. I can’t blame her, really. Will definitely be working on training her to use pee pads for future flights (a lot less messy…).”

Arriving in Dubai, and then in Doha

Islam is the state religion in both the United Arab Emirates and Qatar, so I was particularly interested in hearing how Farrah’s arrival in those countries went. Maria reports that Farrah caused a minor furor in Dubai, but sailed into Doha:

“Once in Dubai we were all instructed to get off the plane and go through security all over again. Dogs aren’t very commonplace in the Middle East, and I had expected a little bit of flack, but the security personnel in Dubai seemed absolutely flabbergasted. They stopped me and made a handful of frantic phone calls in Arabic. When I showed them all of her paperwork (including the Qatari import permit) they seemed ok, and begged me not to let her out of her crate while in the airport.

I found it odd that I had the most difficulty in a ‘dog-friendly’ country like the USA, and had the easiest time in supposedly ‘anti-dog’ Qatar. The Doha airport had a system similar to the US, with ‘red’ and ‘green’ lines for customs. I went through the ‘red’ lines and handed all of Farrah’s paperwork to the niqab-wearing customs agent. She barely glanced at it before handing it back to me and sending us on our way!

Waiting on the other side was my fiancé and Farrah’s dad, who she was ecstatic about being reunited with. Later we had to worry about finding a pet friendly hotel in Doha (of which there are remarkably few), and finding a real estate company wiling to allow her to stay in an apartment with me.” 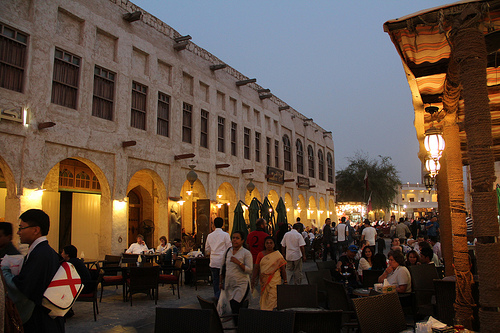 An evening in Doha, Qatar (Photo by Lawrence Wang)

Maria’s verdict? “It was an incredibly draining experience, and one I’m hoping Farrah will get more accustomed to, seeing as we will be flying back and forth to the States quite a bit. I only hope this experience might benefit someone else in some way!” I’m confident it will, Maria — thank you so much. It’s a trip I’d have hesitated to take (as Maria told me, “People thought I was crazy, but hey, that’s never stopped me!”), but now I know it can be done, and without too much, um, craziness.