I have flown with Chloe on a Southwest 737-800, but while I remembered a tape measure, I hadn’t yet figured out that it would be a good idea to include a picture of Chloe’s carrier (in that case, her large SturdiBag) in my post about the available space. Thankfully, Dog Jaunt has sensible readers, including Claire, who traveled either to or from Phoenix on a Southwest 737-800 plane with Daisy, her tricolor Cavalier, and sent a picture: 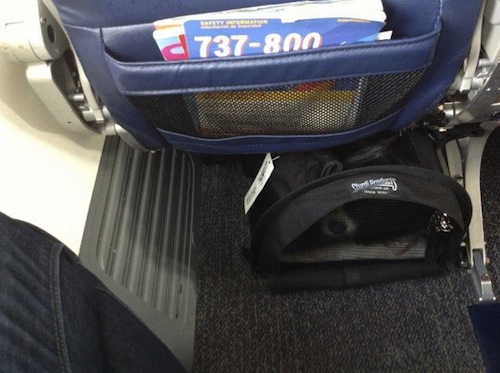 I particularly like how Claire included the safety card in the shot, so it’s immediately apparent what kind of plane is accommodating that large SturdiBag so neatly.