You’ll remember that at the end of February, reader Debra shared a lot of useful information about flying with two dogs at once in a divided carrier. She and her husband traveled with their pups Raisin and Mia, both Mexican Frenchies, to Ft. Myers, FL. Imagine my dismay when I heard from Debby, only a couple of weeks later, that Raisin was fighting for her life after eating some Orbit gum that fell out of Debby’s purse. I had heard about Xylitol poisoning, but hadn’t given it the attention it deserves. Here’s what Debby told me:

“I wish we were still in Ft. Meyers! I want to inform you and your readers of a generally unknown about poison that many of our dogs have easy access to.

My sweet girl Raisin has spent the last 30 hrs. at the pet ER/hospital battling for her life. It is Xylitol poisoning, in our case she got into some Orbit gum that had fallen out of my purse. It has been an extremely heartbreaking and expensive lesson to learn.

She was rushed to the vet with violent vomiting, when we arrived she took a look at her pale gums, shallow rapid breathing and sent her immediately to the ER vet. I had taken in the vomit, and we detected blue green pieces in it. That led to a quick diagnosis, thank goodness. Her glucose levels didn’t start to drop until about 18 hrs. after ingestion, so time was of the essence in monitoring and blood levels, which they run every three hours. She has been on IV infusions of fluids and glucose to stabilize her.” 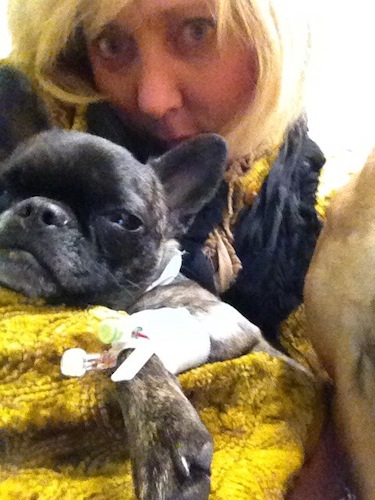 Debby wrote to me first after 36 hours had passed, and told me that “the effects unfortunately are insidious and can continue for at least 72 hrs after ingestion.” She was able to bring Raisin home after about 40 hours — and after spending $1400.

“She was one VERY sick little girl and still at about 48 hrs. now, not out of the woods. I brought her home late last night, the vet had me feed her every 3 hours and give her a tsp. of Karo syrup to help keep her glucose levels up. So far she is acting fairly normal but will have more levels drawn over the next couple of days. 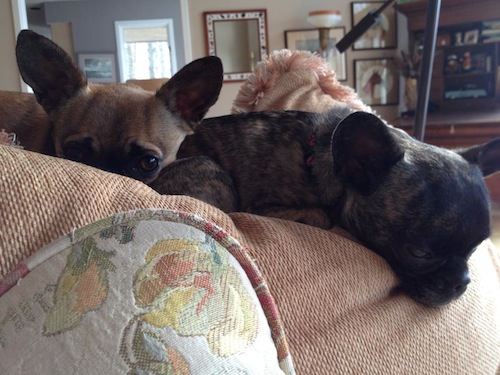 I will post a link to an informative explanation of why this product reacts as it does. The hospital ER said they are seeing up to two cases a month now and by the article’s graph it is apparent that this has just gone from nothing to almost epidemic proportions in the last few years. Very few people are aware of the impact of Xylitol. I also just thought your dog could get sick from this, but NEVER dreamed the extent and seriousness of the consequences. I am incensed that Xylitol carries no warnings at the VERY least. I will NEVER have anything with Xylitol in my home again and will be contacting this company to demand some type of warning label.”

As Debby emphasized in a follow-up message, one of the reasons Raisin survived is that they rushed to get her care when she began vomiting. Other indicators, per this article from the San Francisco Chronicle? “Lethargy, staggering, tremors or seizures, or unconscious[ness]. Some, but not all, dogs also vomit and have diarrhea.” Every article I’ve seen on the topic stresses that reacting within the first half-hour after exposure enormously improves your dog’s chances of survival.

Also, and it turned out to be crucially important, Debby saved and took with them the towels they used to clean up Raisin’s vomit:

“I threw all the paper towels with vomit and the vomit from the car ride into a plastic grocery bag. This was HUGE. They were able to search through it and pick out blue pieces of gum. She had gotten out of the electric fence earlier that day and I thought she had found some kind of poison. They said they thought it was gum and I realized I had caught her with a packet of Orbit gum earlier.”

What the article Debby linked to emphasizes is that Xylitol is an ingredient in a huge number of products you may have right now in your home — not just sugar-free gum. As the San Francisco Chronicle article says, it’s “widely used in all kinds of dental products including sugar-free gum, breath mints, toothpaste and mouthwash; even some veterinary dental products intended for canine use contain trace amounts of xylitol (which is safe).” But that’s not all — it’s also a common ingredient in food products, including “muffin, brownie and cookie mixes, as well as candy, energy bars, Jell-O, pudding and ice cream. It’s even sold in bulk for use in baking and beverages. In fact, just about anything sweet may contain xylitol.”

Any product with more than trace amounts of Xylitol is a danger for your dog (not so much for your cat, by the way). I plan to read labels closely from now on, and keep the stuff out of our house entirely. My warmest wishes to Debby and Raisin, and my thanks, too, for raising my awareness of this hazard. Keep it in mind as you travel! Even if you eliminate Xylitol from your home, the friend you’re visiting may not have! This is another reason to identify, ahead of time, an emergency vet at the place you’ll be visiting, and to program into your phone the number for the ASPCA Animal Poison Control Center.