I’m not calling this a product review, because it’s really just a note to say that we used the Metro Air Force crate fan (Model CCF-1) this summer, and were pleased with it. Although Seattle is cool enough not to make air conditioning a standard home feature, there are a couple of weeks every summer when I seriously consider putting A/C in myself, by hand, with a freaking Sawzall. On those hot days, I worry about Chloe in her crate (we leave her there as little as possible, but sometimes it’s necessary). 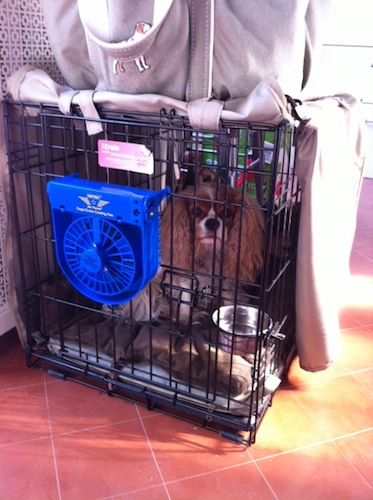 When the fan's going, I roll up the back "wall" of Chloe's crate cover, so the air can flow through. Normally it's down, for that full lair effect.

This fan doesn’t move a lot of air (the upside of that is that it’s quiet, on both of its speeds, and doesn’t seem to bother Chloe a bit), but you can certainly feel a breeze. Though plastic, it’s solidly built, and it’s a straightforward object — a fan enclosed in a box with two arms that swivel up and hook onto the bars of your dog’s crate (as you know from previous posts, Chloe’s home and travel crates are from Midwest, but it would work on the front of a Vari-Kennel too).

The fan is bulky (7.5″ x 6.5″ x 2.5″), and weighs about 3/4 of a pound, so you’ll be devoting prime suitcase space to it. In hot weather, though, it’ll really improve your pet’s comfort. Remember to pack extra batteries — it takes two D-cells (which makes this a good option for those of you who crate your dogs on car trips).

One last note for those of you who, like me, are anxious and have vivid imaginations: I had worried that either Chloe, from the inside, or our cats, from the outside, would get their paws/nails into the fan. The slats are positioned closely enough together, however, and far enough from the fan’s blades, that I’ve put that concern behind me.