Not long ago, reader Alexandra asked for suggestions for an around-town tote for Bella, her small Cocker Spaniel. Bella is slightly bigger than Chloe — about 14-15 lbs., about 13 inches high at the shoulder, and about 16 inches from neck to tail. Like Chloe, therefore, Bella is in that tricky “big small dog” category — theoretically convenient, but actually a little too large for most small-dog carriers.

Alexandra was interested in the Elite Kaba carrier I profiled about a year ago (too small for Bella, she thought), and considered the PetEgo messenger bag I rely on (too small for Bella, I thought). I suggested the Wagwear tote as an alternative, but I got the impression that Alexandra hoped for an option that could be open or closed, as needed. And there it stood until, looking for something else entirely, I happened on the Olly Tote.

The only other OllyDog product I’ve looked at closely was the OllyDog Walker, a hip pack that I loved. It’s no longer available, but I ordered the Tote with a feeling of confidence that it would be well-designed and well-made. I wasn’t disappointed. For a surprisingly low price (just under $45), I got an over-the-shoulder tote that fits my large small dog, won’t fall to pieces, and has a number of well-thought-out features.

The Tote is made of sturdy forest green (so dark that I thought it was black until I saw it in a really strong light) or orange nylon twill and it’s 14″ tall, 16″ long and about 7″ wide (despite the label, which says it’s 15″x17″x7″). Chloe could conceivably stand up in it, but she’d be bunched up — it’s really meant to carry her in a sitting position. Here she is, in two different views, looking as put-upon as possible. You’ll just have to take my word that she was, in fact, sitting comfortably. 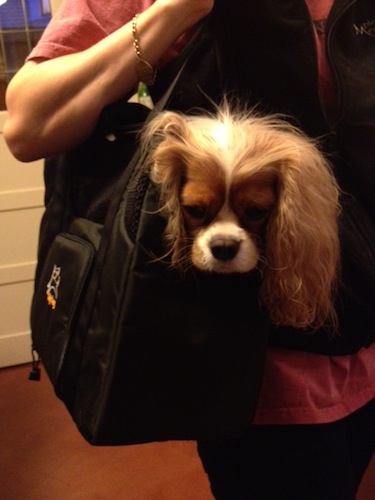 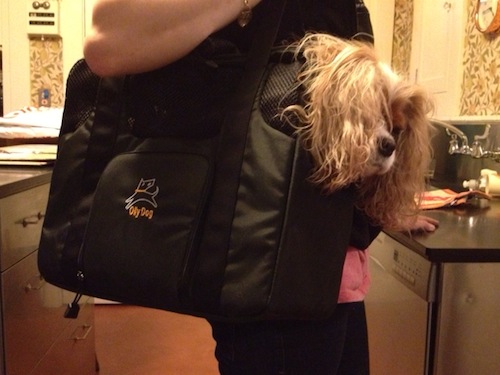 Her chin is resting on a cut-out in one of the short ends of the bag. The top flap of the carrier has a zipper that runs along both long ends and around the cut out — half of it is mesh, and a Velcro tab allows you to fold the mesh portion back up under the solid portion, creating, if you choose, a hatch that your dog’s head can poke out of. Alternatively — and I think this is the feature Alexandra was looking for — you can zip the entire top closed, and your dog can still see out in all directions, through the mesh ventilation panels.

There are four of them altogether: One on half of the top flap, extending over to the upper portion of one of the ends, one on the upper portion of the other end, and two long panels on each side. The mesh is double-layered and will, I believe, resist scratching. The zipper is good-quality and the designers sensibly provided a fabric guard on its inside, so you won’t zip your dog’s ear fur. The fleece pad on the bottom extends several inches up the two ends and is secured in place with Velcro strips, so it won’t wad up. There is a slim pocket on one side, just inside a band through which a seat belt can be passed to secure the carrier in a car. A larger pocket on the other side (you can just see it, under the logo, in the second picture) is big enough for treats, a roll of poop bags, a phone and perhaps a thin wallet — it has slots for credit cards and a driver’s license, but I don’t see myself using that particular feature.

Sturdily-constructed, the bag does not sag when your dog is in it, and the sides and top retain their overall boxy shape. This would not be a bag you could fold down and tuck into your carry-on or suitcase.

It’s a low-key bag, but I wouldn’t call it a stealth bag — the ventilation panels are pretty obvious, after all, and there’s a big embroidered OllyDog logo on one of the sides. I’m delighted to own it — like Alexandra, I felt a need for a tote that could be zipped closed. I only have two gripes: There is no lanyard inside, to clip onto Chloe’s harness, and the shoulder straps could be a couple of inches longer (especially when I’m trying to get the carrier over a bulky winter coat). On balance, those are minor issues, and I’d snap this carrier up. It’s not on the OllyDog site — in fact, the only place I could find it was through the Sierra Trading Post — so it may not be long for this world.