One of the items on Dog Jaunt’s travel packing list is a towel to put between your dog and a car seat, whether it’s a rental car or a car you’re borrowing from the folks you’re visiting. In real life, I’ve been using a Zentek crate pad instead of a towel, because I’m impressed by the magic material Zentek uses and because it packs compactly. Just before this holiday season’s car trips, though, I bought the Reversible Dog Travel Blanket offered by Land’s End, and we’ve been trying it out. [2/21/12 No longer available! Drat! If I had to buy one now, I’d try this one from Orvis.]

The whole point, after all, is to protect the car from your dog’s hair, drool, etc. (and to improve your dog’s comfort, especially on a hot or slippery seat). A small pad like the one I’ve been using is good for a quick trip, or when your packing space is limited, but it doesn’t protect the back of the seat — and thanks to gravity, Chloe typically ends up resting against the seat back. 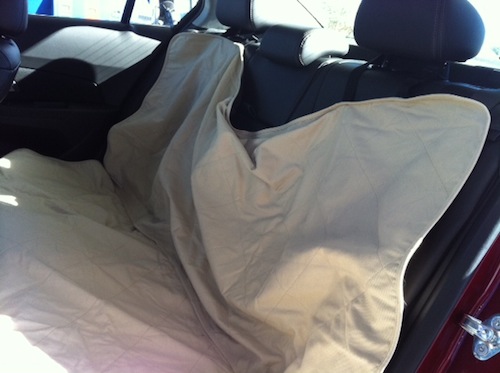 Across the back of our rented Chevy Cruze (twill side up)

Here’s what I like about the Land’s End seat cover: It has a fleecy side and a twill side, so it’s pleasant in either hot or cold weather. It has generous slots providing access to the latch bars (next to the seat belt buckles) to which I clip Chloe’s car harness. There are two straps on one side of the cover which clip around the back seat headrests, holding half of the cover up vertically (so it protects the back of the seat as well as the seat itself). They are easy to clip and unclip, allowing you to install the seat cover quickly in a rental car. Renting a mini-van and only need a cover for a single seat? Just fold the cover in half, and clip both headrest straps around the same headrest.

The cover is attractive enough on its own (it’s really just a large quilted square) that you can also use it inside a hotel room or a friend’s house to protect a chair, or part of a couch. Some users leaving comments for Land’s End wish the cover was more than a simple square — since the edges just hang down, an active dog can easily disarrange the cover — but a dog Chloe’s size can’t wreak that kind of havoc.

So far, it’s worked well in a rented Chevrolet Cruze (that’s a small car, so the cover sagged between the headrest straps — again, no problem with a dog Chloe’s size) and in my father-in-law’s mini-van (where I learned the fold-it-in-half trick). It did not work in my mother-in-law’s Lincoln sedan, since her back seat headrests are merely bumps in a smooth expanse of leather — twining the straps through the tops of the seat belts provided some vertical coverage, but wasn’t pretty.

Given that it’s meant to adapt to as many cars as possible, this may not be your best choice for a permanent car seat cover. It also sounds like it’s not the best choice for bigger, active dogs. It works well, however, when you’re traveling with a small dog. On trips where I have extra room in the suitcase (the cover is about the size of a folded bath towel, for packing purposes), I’ll bring it along happily.