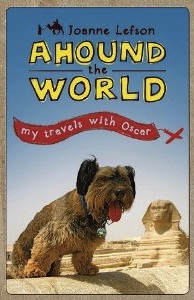 Author Joanne Lefson set off from Cape Town in May 2009 with her mutt Oscar, rescued from a local shelter, and visited 29 countries on 5 continents over the course of nearly 8 months — all in an effort to publicize the plight of homeless dogs, and to promote dog adoption and spay/neuter programs. Her book about their trip, published in October 2010, is unfiltered and engaging, and the pictures — mainly of Oscar in front of monuments like the Sphinx and the Taj Mahal — are absolutely charming.

I can’t recommend it as a dog travel guide. I suspect that Lefson would agree that many of the countries they visited were places that she would never return to with a canine companion. Add to that Lefson’s choice not to put Oscar on a leash in any country other than India (despite almost losing him to a crocodile in Livingstone, and almost losing him, full stop, in Split), plus her nail-biting approach to paperwork, and you have a book that had me sweating with anxiety. To be fair, I should add that aside from the leash issue, Lefson was fiercely protective of Oscar’s health and well-being. On their flight from Moscow to Delhi, for example, Lefson inquired about the conditions in the hold so often that the beleaguered crew finally took her to the rear of the plane, pulled up a hatch in the floor, and showed her Oscar’s kennel from above (“The noise from the engine was a little louder than I had expected, but the temperature was perfect and, best of all, Oscar seemed relaxed and content”).

Traveling with a dog, however, was not Lefson’s primary goal, nor was she interested in being an ambassador for pet travel. Her goal was to make a splash — to visit and encourage dog shelters working in the most daunting circumstances, and to show that rescued dogs can be great companions by taking the coolest possible photographs of Oscar. I can’t love her decision to fake blindness so that Oscar, in an assumed role as a guide dog, could be photographed at Machu Picchu, but I have to admire her intensity of purpose and her complete commitment to her cause.

According to the back cover, Lefson plans to produce a documentary and TV series from the footage she and her various cameramen shot during the trip. I’m looking forward to that — I realize that you can’t fill a book’s photo section with pictures of desperate dogs, and I’m guessing that Lefson simply didn’t have time to blog about her trip while it was happening. Behind the outrageous puns and the pictures of Oscar, though, is a very serious story, and I’m interested to see how Lefson is going to present it on-screen. Meanwhile, she and Oscar are touring South Africa to encourage pet adoptions across the country.

Amazon link:
Ahound the World: My travels with Oscar