This past Sunday, we took a day trip to Chartres. I had heard for years (well, decades, but who’s counting?) how easy it is to get to, and how marvelous the cathedral is, but for some reason I’d never gone. And for some reason, this Sunday morning we decided to go.

Getting there and back by train

We took the metro to the Montparnasse-Bienvenüe station, then followed the signs for the Grandes Lignes trains (to be honest, we first followed the signs for the Ile-de-France trains, but that was the wrong thing to do). There are ticket machines you can use, and plenty of them, but we didn’t know if we could buy a ticket for the dog at those machines, and we were pressed for time, so we hurried up to the ticket counter, gibbered at the ticket seller, and received what turned out to be nearly the correct tickets (we had asked for First Class return tickets and came away with First Class out and Second Class back, but it ended up not being a problem, as you’ll see). Be sure to validate your ticket before you board your train! Look for the small machines labeled with a sign saying something like “Compostez votre billet,” and poke your ticket in the slot — a small line of text will be stamped across the end of your ticket. 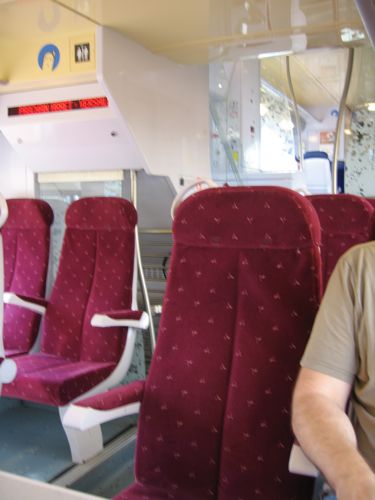 We chose to buy First Class tickets because my husband has very long legs, but we would have been acceptably comfortable on the way to Chartres in Second Class seats, which were, at least on this particular TER train, not as close together as airplane seats and looked quite survivable. First Class was pleasant, however, and we had a table to spread our food, journals, etc. out on. On the way back from Chartres, the train was full to bursting, and we were very grateful for our First Class seats.

Chloe’s ticket cost €5.10 each way, because she weighs (about) 6 kg and she was traveling in a carrier. Here are the official rules (click on “Produits et prix”):

Your pet’s fee is 50% of the full price of a Second Class ticket, even if you are traveling in First Class.
The fee for a small dog or other pet (under 6 kg) carried in a bag or a basket (under 45 x 30 x 25 cm), is 5 € 10.
Before you seat yourself, ask nearby passengers if they are bothered by your pet, since you must not force its presence on them. Your dog must wear a muzzle (this is mandatory).

We were the first ones in our carriages, so we didn’t have to ask our neighbors if they were troubled by our dog’s presence. Chloe did not wear a muzzle, and the conductor did not seem perturbed (if you’re traveling with a big dog, you might want to have a muzzle on hand, in case you encounter a sterner conductor). She traveled in her new Milk & Pepper carrier (which I will be describing in more detail any day now, but you should know that it has two open ends); a cat, two rows behind us on the return trip, had a closed carrier but traveled outside of it in her owner’s lap (again, without any objection from the conductor). 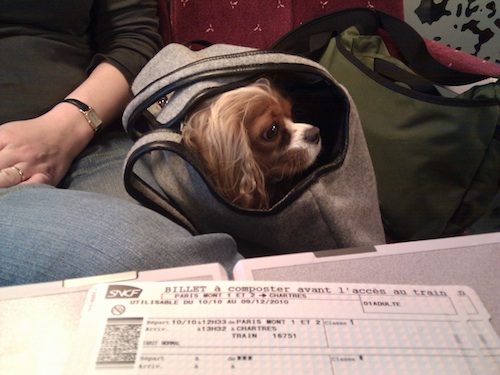 Chloe on her way to Chartres

The cathedral was, in fact, completely glorious, and I say that even though the entire front — one of its most celebrated features — was swaddled in scaffolding. (Walter and I agreed that someone enterprising should start a website called isitcoveredwithscaffolding.fr, since important monuments are so often being restored.) We explored the interior with Chloe in her carrier on my shoulder, and no one expressed concern or disapproval. I did not make an effort to find out ahead of time whether she was allowed indoors (I could have called the diocese), and I did not ask for permission once I arrived, but I would certainly have left if asked. For her part, Chloe was silent the entire time she was inside.

When we left, we set Chloe on her own four legs and walked around the cathedral, admiring the carvings we could see (there were plenty, and they were impressive). Don’t miss the two gardens behind the cathedral, one with a view over the town (and of the outdoor labyrinth, a version of the one inside), and the other a very peaceful spot in front of the Musée des Beaux-Arts. The buildings facing the cathedral are lovely and, except for a somewhat generic shopping area just south of the cathedral, the central part of town is very appealing. We strolled, we had a coffee and a bottle of fizzy water in a shady spot next to the cathedral, and then we headed to the train station. 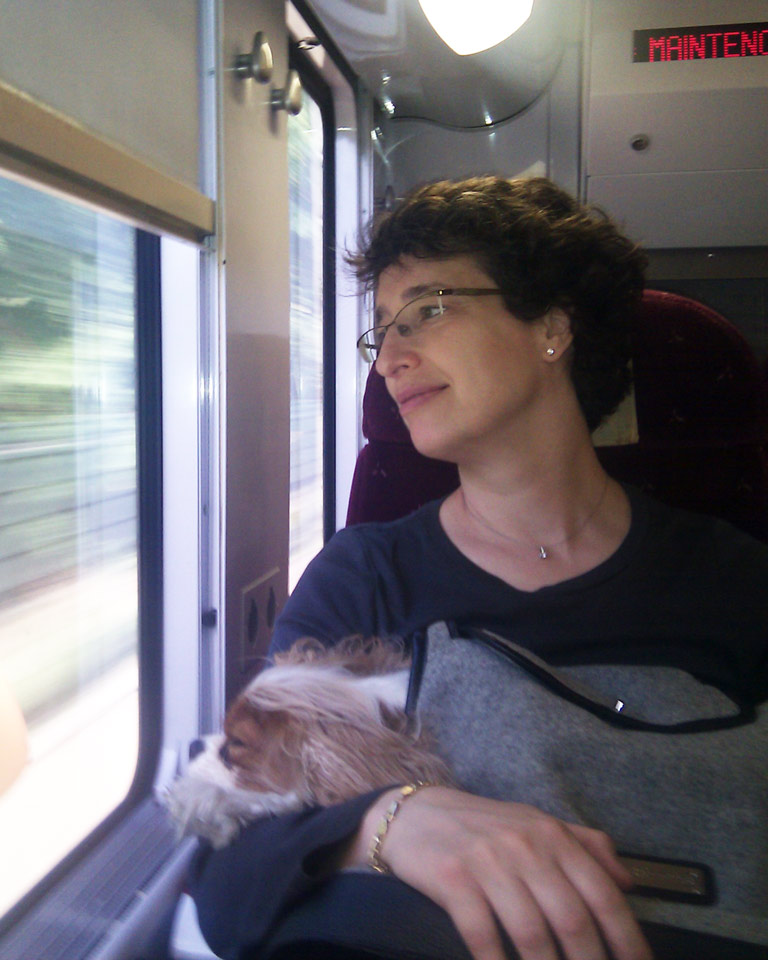 Chloe snoozes on the return trip

The last happy event of the day? We discovered that our return tickets were Second Class tickets just before the conductor reached us, and only two stops away from Paris. We explained our error and offered to pay the difference, but the conductor smiled as he looked at Chloe, sacked out in my arms, and told us not to fret.