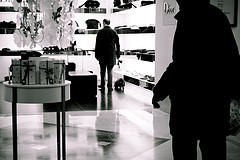 Dog and Dior (photo by pussnboots)

Almost a month ago, I wrote a post about having The Conversation in French — you know, the conversation you have with the other dog owners you meet during a walk (“What a great dog! What kind is she? How old is she?” and so on). Shortly after I posted it, I realized that I hadn’t asked Melanie, my Parisian friend (and a skilled linguist), for help with a phrase I suspect I’ll use even more often: Are dogs permitted inside?

Melanie discussed the issue with her sweetie, Paul, and they had different opinions. Paul believes the most Parisian thing to do would be to just walk in with the dog and don’t ask if they’re allowed (that’s for shops, bakeries, etc.), except for restaurants. For restaurants, he would ask permission with the phrase “Est-ce que les chiens sont autorisés ici?”

Melanie, by contrast, believes she would ask before entering shops and bakeries too, using the phrase “(Est-ce que) je peux entrer avec mon chien?” (The “Est-ce que” part of the phrase is grammatically correct, but often gets left off in real life.)