Just over  week ago, I wrote a guest post for my friend Helen Fazio’s blog (Travels with My Dog) reviewing many of Seattle’s food trucks — they’re fun to track down, the food at each has been delicious, and they’re a great choice for people with dogs. As I mentioned in the post, though, I missed two trucks: Where Ya At, offering “Creole soul food” (including po boys, muffalettas, and beignets) and Street Treats, offering a variety of desserts (including dessert bars, cookie sandwiches, and custom-made ice cream sandwiches). 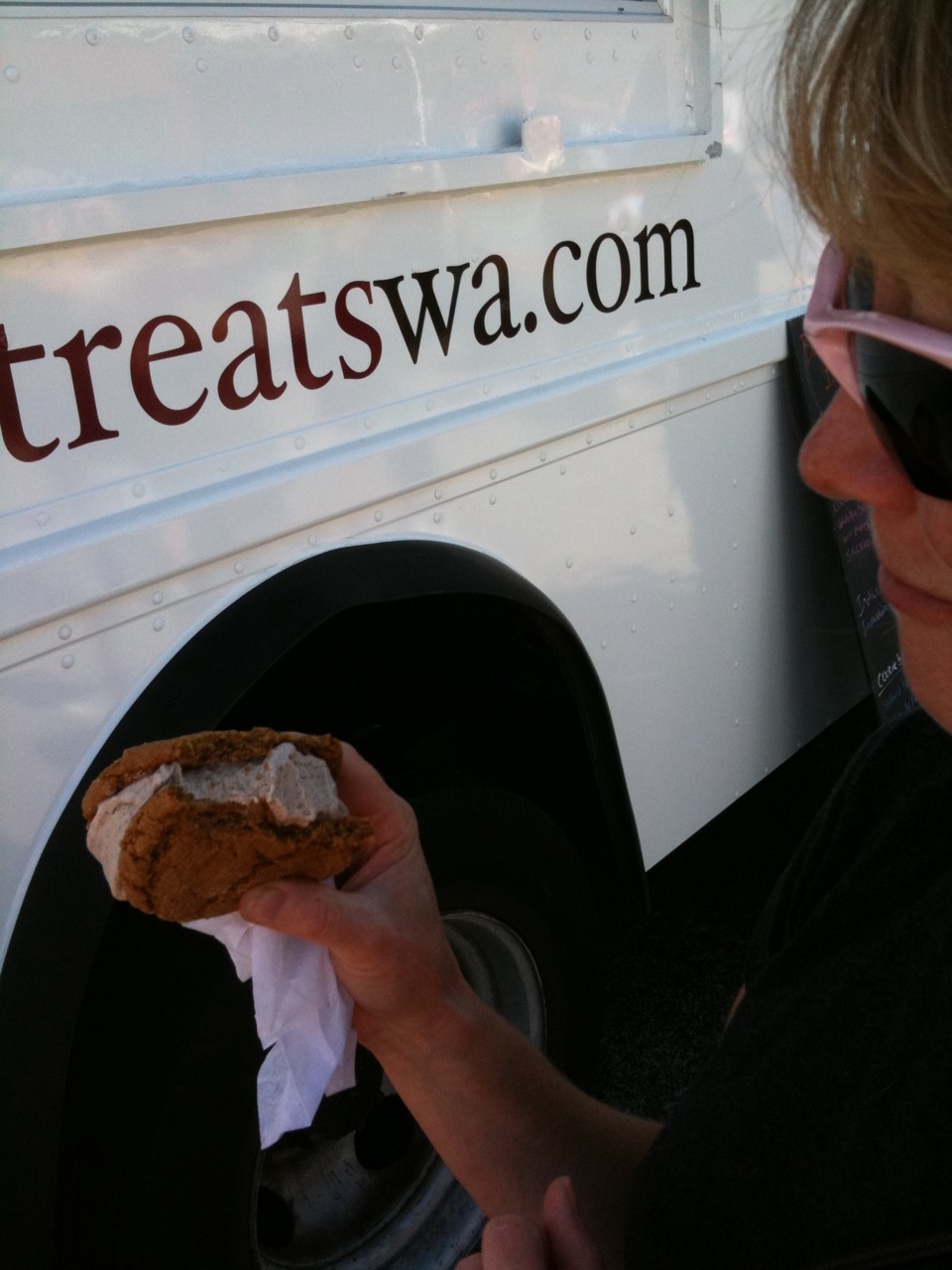 That bothered me, so I was happy to find both of them at the South Lake Union Block Party last Friday. My friend Rosy was visiting from Anchorage, so we grabbed Chloe and checked them out together (I need a taster for dessert trucks, since I’m deathly allergic to nuts). Neither truck had tables, so we took our loot across the street to the park.

Where Ya At: My nut allergy knocked out the muffalettas, since they include mortadella, and it was cruelly hot out, so we passed on the gumbo option. We focused on the po boys: I had the Creole pork (strongly recommended by the guy taking our orders) and Rosy had the shrimp. Both were made with the freshest of ingredients, which we appreciated; the shrimp po boy was good but bland, and the Creole pork was…just about perfect. Trust the Order-taking Guy. We passed up the beignets because (1) it was H-O-T, and (2) Rosy was my lone dessert tester, and she was honor-bound to try the Street Treats truck.

Street Treats: Rosy went for the custom-made ice cream sandwich. There’s a list of possible cookie choices (including, for example, oatmeal, chocolate chip, molasses, and peanut butter) and there’s another list of ice cream choices. You name an item from each list and are presented, in Rosy’s case, with Stumptown coffee ice cream sandwiched between two molasses cookies. Rosy raved. The cookies were soft and delicious, the ice cream was excellent, and the combination was inspired — she chose wisely. [8/19/10 I returned today with my brother- and sister-in-law, both of whom chose the peanut butter and salted caramel cookie around dark chocolate ice cream. They were happy, happy people. “Like a Reese’s cup,” said my brother-in-law.]

I’ve since learned that there’s yet another Seattle food truck I haven’t tried. Buns on Wheels reportedly offers gourmet burgers, but they’re a mysterious crew. They appear to have two websites (I’d ignore bunsseatle.com, since the calendar is blank), and their Twitter feed hasn’t been updated since August 15. When I track them down, I’ll let you know what I think.