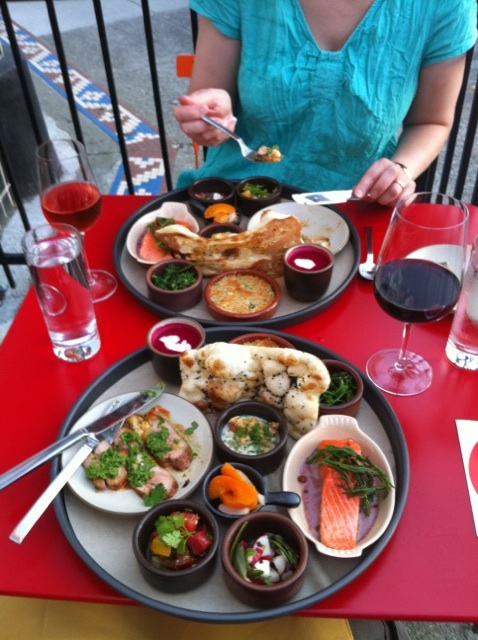 Poppy opened in Seattle’s Capitol Hill neighborhood just over a year ago, in a blaze of glory. Chef Jerry Traunfeld had been at The Herbfarm, a legendary local restaurant, for years; had left The Herbfarm; his fans were on tenterhooks…and then Poppy appeared at the north end of Broadway, serving eclectic, delicious food in an unusual format. Each diner gets a “thali,” or tray, of small dishes — including a couple of entrées, maybe a soup, a relish, several salads, a tiny gratin — either seven or ten items, depending on your appetite, and all exquisitely chosen, flavored and prepared.

Fans (can you tell I’m one?) raved, while others complained that the food wasn’t sufficiently Indian (“thali” is a Hindi word, and that’s been throwing people off — the food is inspired by a variety of cultures, and by Traunfeld’s passion for herbs, but people seem to expect Indian) and that the thali format means that while you’re eating some of the dishes, others get cold. You do have to eat strategically (hot things first, then room temp/cool things), but that’s not a particular challenge.

Anyhow, Poppy started out with only indoor seating, but now has a back patio and several sidewalk tables flanking the front door. Diners with dogs are welcome at the sidewalk tables, and we ate there with Chloe this past Sunday. Dinner was outstanding, as always (I beg you to start with the eggplant fries appetizer — yes, I hate eggplant too, and I’m telling you that you’ll want two orders), and the service was, as always, attentive and polished. It is a tiny bit awkward eating right on Broadway, a street known for its colorful characters, but Poppy’s at the north end, where there isn’t a lot of foot traffic. Please note that the tables in front do not have umbrellas, so if you prefer shade, wait to eat until the sun drops below the buildings on the west side of Broadway.