For years, I’ve been sending Dachshund owners to the Sleepypod Air, an unusually long and low carrier with Sleepypod’s usual great design and quality. And that’s what I did with reader Jenny, who dutifully bought one for Oscar, her Dachshund (followers of Dog Jaunt’s Facebook page will remember that Jenny and Oscar are the co-founders of Cheeky Dog Bakery, based in Dublin, Ireland). Jenny liked the Air, up to a point, but felt that it didn’t give Oscar enough room to turn around — so her next purchase was the large SturdiBag I recommend so often. She wrote to me to enthuse about how it had worked for her and Oscar, and to provide pictures of it in action under an Economy seat in an Air Canada 777-200 LR plane.

Here’s what she said: “Hey! I would absolutely recommend the large SturdiBag for doxies! Oscar had so much room he even had his stuffed dog in with him and could curl up in a ball to sleep. When we were walking or in the airport he could pop his head out the top and I could feed him treats at take off and landing to adjust his ears.”

We’ll start with Jenny’s picture of the carrier in place under her seat. Here’s a link to SeatGuru’s diagram of an Air Canada 777-200LR — as you can see, there are only First Class and Economy seats. Jenny and Oscar were in an Economy seat on the left side of the plane, on the aisle: 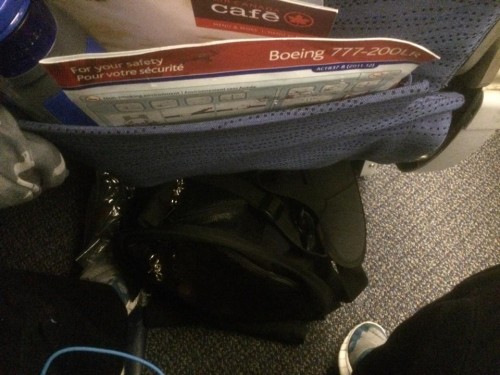 And here are Jenny’s pictures of Oscar inside his SturdiBag, and cruising around the airport: 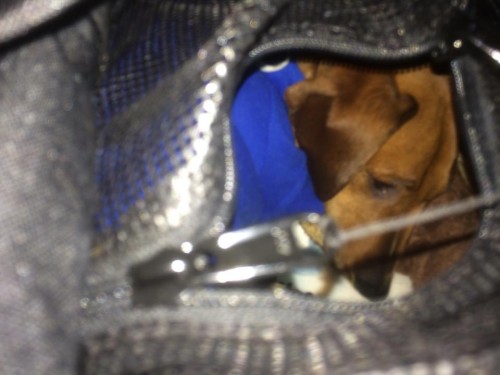 A picture through the top hatch of the SturdiBag, of Oscar curled up inside. Dachshunds! They’ll KILL you with those mournful-looking eyebrows! 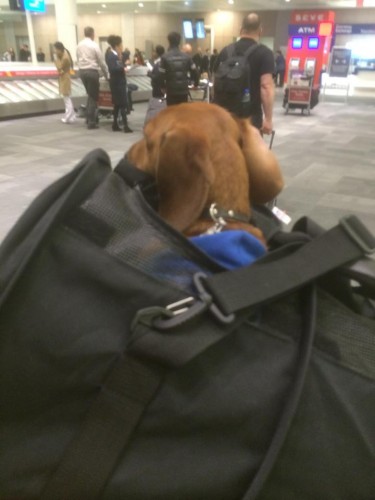 Peeping out the top hatch to view the baggage claim area. 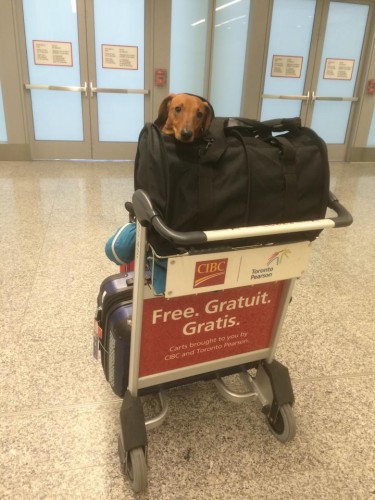 Thanks so much to Jenny for making it easier for other folks with Dachshunds to choose a good carrier for them, and for the picture of the large SturdiBag in actual use on a plane/airline combination I’m not likely to fly on myself. I’m tagging this post so that it appears in Dog Jaunt’s growing collection of pictures of carriers on planes, so other travelers can refer to it. For more great pictures of Oscar, check out Jenny’s blog on the Cheeky Dog Bakery site!