You’ve met Nico the Rat Terrier before, back in October 2011, when I posted a picture of her at the Snoqualmie Falls, just east of Seattle. Reader Lenox continues to travel with her, and her latest report is about a trip from Denver to San Diego on Frontier Airlines. I’m particularly grateful to Lenox because we never fly on Frontier, and because she included a photo of the pet relief area at the San Diego airport — when I wrote about it in 2009, I was such a new blogger that I didn’t think to take a photo, and I haven’t been back since.

Lenox bought a large SturdiBag for Nico, and first used it back in Summer 2011. She reports that their “experience flying from Denver to San Diego on Frontier was wonderful. We were even allowed to put her carrier (with her in it of course) on the seat between us. Some airlines require that you keep the carrier under the seat at all times, but as there was no other passenger sharing the row of seats with us, we kept her in between us, which really relaxed her.”

On Nico’s first flight, she was a pretty anxious dog (panting heavily, and shaking, though she never whined or barked). On this trip, Lenox tried Rescue Pet Remedy, and “[i]t worked great for Nico — better than the prescription L–tryptophan (may have been Pro-Quiet) that our vet gave us the first time we flew with her.”

Lenox attached a picture of Nico at the dog beach in Del Mar, CA, and also recommends the Dog Beach at Ocean Beach in southern San Diego and Dog Beach in Coronado.

I flew out of the San Diego International Airport (Terminal 1) on the very first flight I took with Chloe, bringing her home from her breeder. I knew enough to find the pet relief area, but not enough to take a picture of it. Here’s what I wrote: “We were at SAN in January 2009, and its pet relief area is the nicest we’ve been to so far. It is easy to locate, between Terminal 1 and Terminal 2, and not too far away. It is fenced, but does not have a gate. There is a bench for humans and grass (or excellent imitation grass) for the dogs. There is a trash can and a roll of bags. It is quite remarkably pleasant, and I wish there were more pet relief areas like it.” The airport map doesn’t call out the pet relief area, but here it is, thanks to Google Maps: 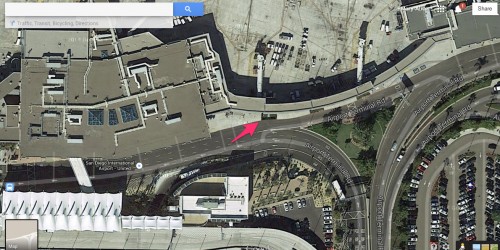 I’d be lost without my Skitch app — the arrow points to the pet relief area.

And here’s what it looks like in Google Maps’ street view:

That’s the walkway from Terminal 1 above the pet relief area, and you can see the corner of Terminal 2 to the left

Lenox kindly included a picture of Nico checking out the pet relief area:

I’m happy to see that the foliage around the edges has indeed grown up, and that they’ve kept the grass that puppy Chloe liked so much.

Thanks so much, Lenox, for the news about traveling on Frontier, calming an anxious flyer, and finding the best dog-friendly beaches in the San Diego area! And with your input, I’ve updated the entry for SAN in Dog Jaunt’s handy guide to airport pet relief areas.